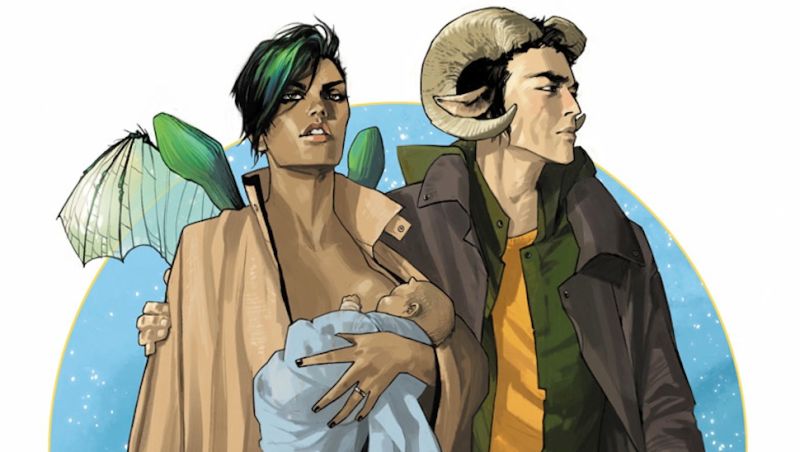 Comics is strangely gendered for a medium so well suited to telling universal stories. When I think about the stereotypical images of a person who reads comics, I think about Comic Book Guy from The Simpsons; a white (yellow) dude with a low ponytail and an oversized T-Shirt. I don’t imagine a woman, and I definitely don’t envision a young, woman of colour like myself.

My experience with comics as a kid was pretty much limited to reading sickly sweet manga like Tokyo Mew Mew and Sailor Moon, works so feminised that I felt I was “allowed” to read them. But with Roxane Gay becoming one of the first black woman to “be a lead writer on a Marvel comic” and Amandla Stenberg co-writing the comic Niobe: She Is Life, these two high profile black women are making it clear that women of colour should have a seat at the comic book table. And it isn’t just about pulling up a chair for writers and readers, its about diversifying the characters within comics too.

This is a list of comics that centre women of colour. It is by no means a complete glossary; there are several graphic novels I could have added (Persepolis, Skim, Aya), as well as comics that have a main cast of women including women of colour (Lumberjanes, Rat Queens). I’m sure there are many others I’m still yet to come across. But it’s a starting point, a list of great stories with heroes that, for some of us, will look like mirrors instead of windows.

Saga is a sexy, explosive, Romeo and Juliette-esque space epic about two lovers, Marko and Alana, of different alien races who hail from warring planets. Now, they are being hunted by contract killers after abandoning their allegiances to their people and birthing an illegitimate mixed-race daughter. Though race in the construct we know it doesn’t really exist in Saga, the main characters are both drawn with people of colour in mind. “Marko is meant to be Asian,” writes illustrator Fiona Staples, and with Alana, Staples sees her “as having mixed heritage. When I drew her father I was envisioning an Indian man.”

The majority of characters in Saga appear to resemble people of colour, and it features a cast of strong-willed, badass women; from the perpetually half naked spider-human-hybrid-hitman named The Stalk, to Izabel, the teenage ghost nanny, to Gwendolyn, a dark-skinned Afro-haired Secretary General from the planet Wreath. But it’s Alana who stands out, with her fierce protection of her daughter yet often gentle nature and total submission to her emotions, proving that even the strongest women aren’t strong all of the time.

Revolving initially around the character Laura, a curly-haired mixed race oddball from Brockley, South London, The Wicked + The Divine has a cast as ethnically diverse and fantastically weird as the capital city it’s set in. Living in London, there’s a little thrill seeing Laura go to events at local gig venues, and taking the N171 bus home afterwards. The plot is also a unique one: where Gods return to Earth every ninety years, re-incarnated but committed to die within two years of their re-appearance, the selfie generation treats the God’s like celebrities, and Laura is their biggest fan. There is Amaterasu, a brightly coloured pop sensation, Baal, a smooth looking pin-up, and The Morrigan, who is a bit more underground (she literally lives in the tube lines). It’s not until one God, Lucifer, is imprisoned for a murder they swear they didn’t commit, that Laura befriends her idols in an attempt to clear Luci’s name. 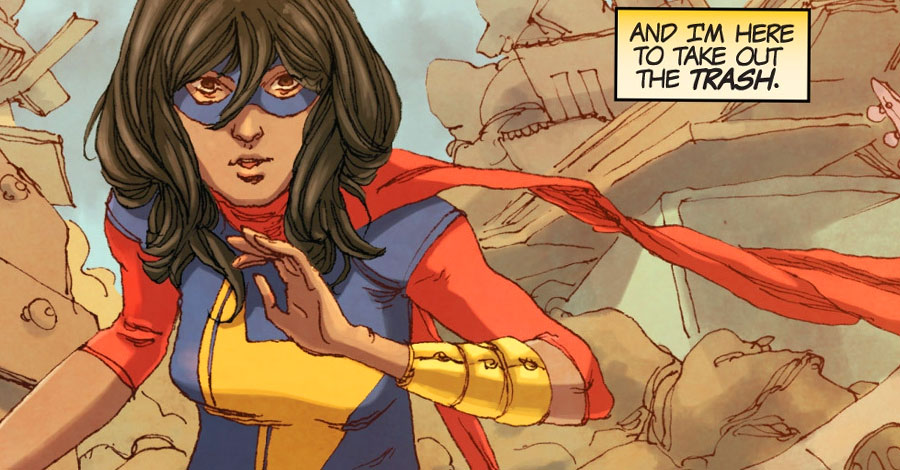 Celebrated for including Marvel’s first Muslim superhero to head their own comic, Ms. Marvel is about Kamala Khan, a fanfic writing Pakistani-American teenager who wishes she could be blonde and popular like her favourite Avengers character Ms Marvel. Balancing the pressures of eurocentric beauty standards with her parents desire for her to succeed in her education, Ms. Marvel is both a superhero genesis story and a commentary about growing up as a second-generation Muslim immigrant in a Western world. With a cast of characters such as her pious brother (“Prayer is noble,” her dad tells him, “but when you spend all day praying, it starts to look like you’re avoiding something. Like finding a job.”), and her friend Nakia, who has recently started wearing a hijab and rejected her Westernised nickname “Kiki”, the comic doesn’t shy away from exploring the micro-aggressions and daily cultural navigations that Kamala faces. When a mysterious fog descends over New Jersey, and Kamala experiences a vision of her favourite Avengers (speaking Urdu, no less), she learns that getting what you wish for is not always as straightforward as it seems. 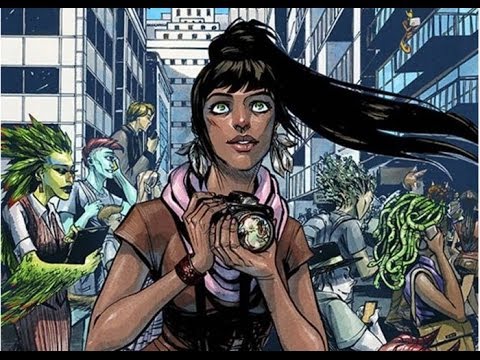 Shutter revolves around Kate, a news photographer and former adventurer whose given up pursuing travel since her father died. Her world then changes when she’s attacked by a mixture of pink translucent swordsmen on one side and anthropomorphic lions in pinstripe suits on the other. This event throws Kate in to a vibrant journey of discovery about her father and his family. Though her mother’s race is somewhat of a plot point that I shan’t reveal, it’s clear by Kate’s dark skin and hair (in contrast to her father’s blonde, pale complexion) that she’s mixed-race. Shutter also introduces Alexis, a transgender woman, without paying voyeuristic and intrusive attention to their gender, a feat that several of the other comics listed here disappointingly fail to manage. It’s a slow burner in the beginning, but once Kate starts finding out more and more about her heritage, you’ll keep wanting to know more and more too. 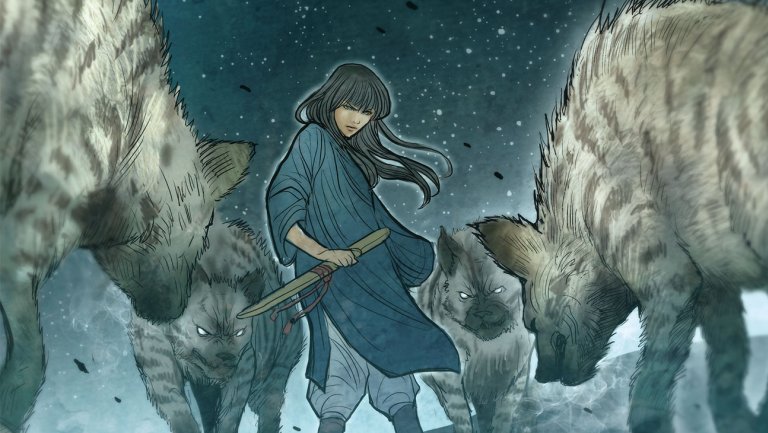 Monstress features a strong cast of women of colour, from the antagonistic witch coven “The Cumea”, to protagonist Maika, a one-armed teenaged girl who we first meet being sold at an auction. There is so much mythology and world building within Monstress that it’s hard to sum it up in an a succinct hook, but essentially the Arcanics (like us, but often with tails and wings and other animal-esque parts) and humans have long been at war, and now Maika, an Arcanic that resembles a human, has a special power deep inside of her waiting to come out. The comic is both written and drawn by women of colour; Majorie Liu, a paranormal writer and long-term partner of Junot Diaz, writes the comic, whilst Sana Takeda, a Japanese artist, is behind the beautiful illustrations. It’s also really gruesome, and only recommended for mature audiences who can handle seeing true horrors of war in elaborate, detailed illustrations. 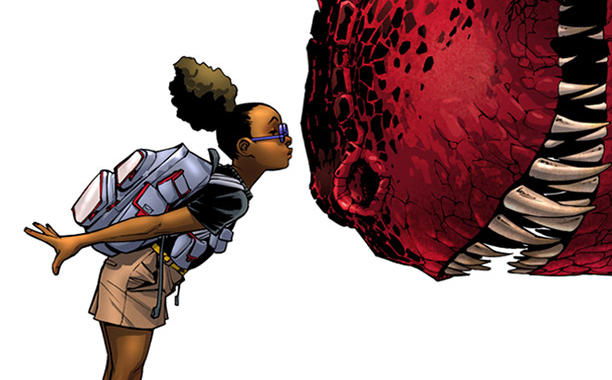 Updating the story of Devil Dinosaur, a dinosaur that first appeared in Marvel’s universe in the 1970s, Moon Girl and Devil Dinosaur sees 9 year old super genius Lunella Lafayette inadvertently open a portal for a giant red T-Rex to walk through, smack bang onto the streets of New York. Not only is Lunella going through all the things other girls her age are – trying to get up in time for school, trying to stop bullies from calling her “Moon Girl” – she’s also, canonically, the smartest person in the Marvel universe. That’s right, in a universe that includes Tony Stark and Reed Richards, a nine year-old black girl is the cleverest of them all. And another great thing about it being set in the Marvel universe is that our girl Kamala Khan guest stars in Vol 10, offering some big sisterly guidance to Lunella on the whole “superhero” thing. If there’s anything better than a woman of colour starring in a comic, it’s two women of colour starring in a comic. 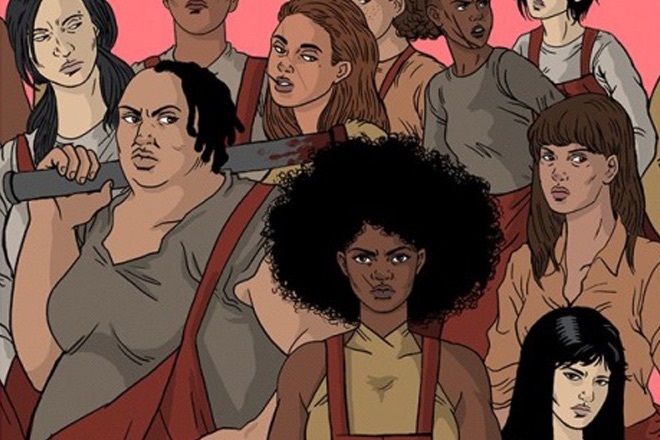 Set in a dystopian version of our reality, non-compliant women are sent away to a planet-sized prison officially called the “Auxiliary Compliance Outpost”, where inmates are beaten and crimes such as being cheated on by your husband (no, really) can ensure you’ll never leave the colloquially termed “Bitch Planet” again. It’s a Black Mirror-esque comic that satirises patriarchal political practices (the governing body is literally called the “Council of Fathers”). When the “Fathers” approach Kamau Kogo, an inmate particularly adept at fighting, to compete in a televised punch-up disguised as a sport, we’re opened up into the inner lives of several inmates who have their own reasons for wanting Kamau to go along with it. Hailed as a feminist comic mimicking 1960s exploitation films, many of the prison inmates are women of colour of differing ethnicities, backgrounds, ages, and sizes. As more are introduced, we learn how they ended up at Bitch Planet, and through flashbacks we’re opened up to the oppressive reality from which they came.