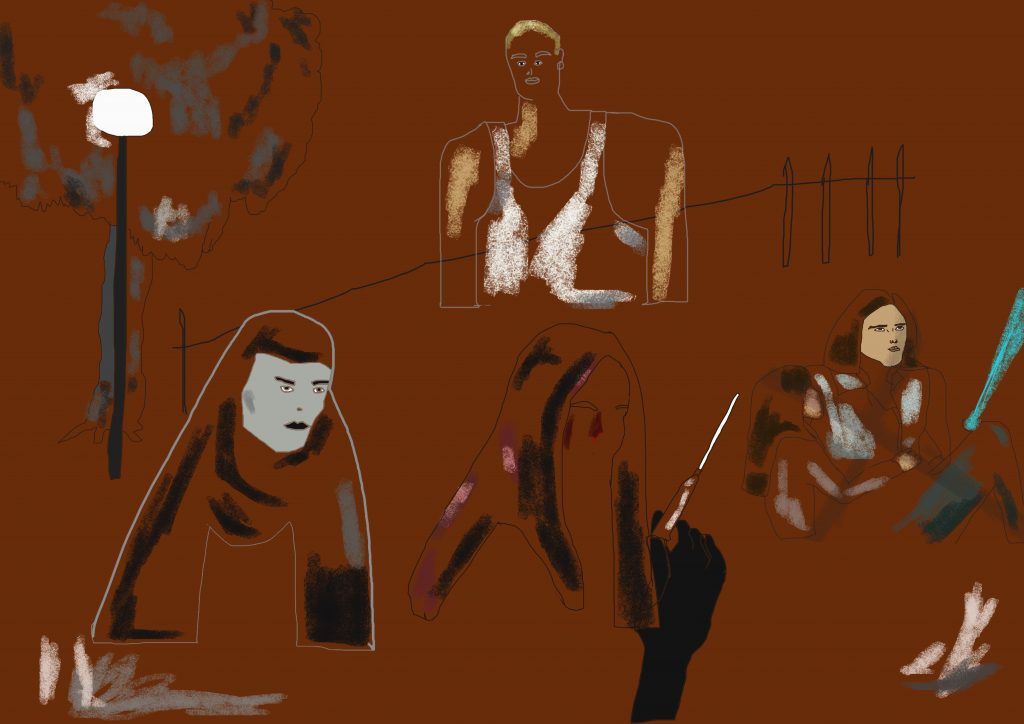 Halloween is upon us and what better time to catch up of some horror films that you’ve missed than right now? That’s been my thought process these past few days, so I headed to Google to search out some films featuring strong female characters. However, while there are many lists out there focusing on the best female characters in horror, they’re (shockingly) a little lacking in diversity.

So, to save my fellow intersectional horror fans, I’ve made my own list. Here, in no particular order, I present to you some of the most iconic female horror characters I’ve seen onscreen, ranging from both victim to villain. All for those of you looking for some viewing inspiration this Halloween.

To be honest, the reason that I first thought of creating this list is because of the absence of this character on the ones that I read previously. The film follows Ayoama, a widow who is convinced by his friend to hold fake auditions in order to find a new girlfriend. There he meets the mysterious Asami who as the film goes on we learn isn’t all who she says she is. This is one of my favourite horror films of all time, which is funny considering that it isn’t until the second half that you realise it isn’t some romantic/buddy comedy. Played by Eihi Shiina, the character Asami is first introduced as a shy, mild-mannered young girl who transforms into a terrifying sadist by the gory end. She becomes a truly iconic villain as she stands with her apron, latex gloves, needle and piano wire. Trust me, this film is not for the faint of heart, but I highly recommend for those with a strong stomach. And even though she may be horrifyingly violent, she does wear some amazing coats throughout. Truly iconic.

Okay, so while this film may not actually be very good it’s saving grace is the one and only Aaliyah playing Queen Akasha, the queen of the vampires. Her costume and makeup throughout  visually references her to real life iconic queen Cleopatra. Honestly, Aaliyah is incredible in this movie and any remote fans of her should watch it just for that reason – Aaliyah is always worth the watch! The only thing to take away from the film is this: do not fuck with Queen Akasha. I didn’t need the film to know that Aaliyah was a queen, but the visual representation of it was greatly appreciated. Iconic.

Mothers are often a centre focus of horror films and Under the Shadow offers a great newcomer to that theme. Set in 1980s Tehran during the War of the Cities in the Iran-Iraq War, the film follows Shideh (played by Narges Rashidi) and her daughter Dorsa as an unexploded bomb lodged in the roof of their apartment complex seems to bring a supernatural evil into their lives. Shideh is exactly the type of mum you would want if you found yourself in some horrific situation, she fights fearlessly for the protection of her daughter even if it means putting herself in the middle of some terrifying situations. Watch this is you’re wanting to get majorly creeped out and unsettled. 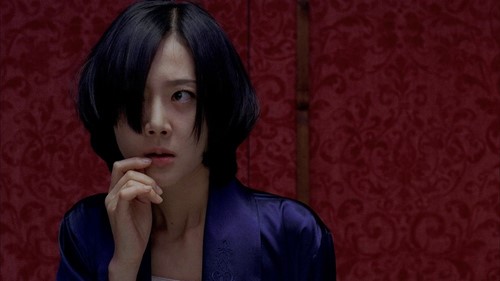 From the beginning Eun Joo (Yum Jung-ah) seems like the evil stepmother from Cinderella. However, this film really isn’t all that it seems and throughout the character sways between villain and victim. The art direction of this film is incredible, from the set design of the house to the costumes of the characters, especially that of Eun Joo – silk and satin never looked so good!  This film is amazing and will leave you wanting to rewatch again and again so I won’t give too much away. But if you’re looking for a twist on the haunted house film along with something psychological and creepy that will keep you guessing until the very end, this is for you.

Naomi Harris has got some truly formidable characters in her filmography, from Moneypenny in the Bond films to Tia Dalma from the Pirates franchise. However, none of those are as iconic to me as her role of Selena in 28 Days Later. Beginning as a seemingly cold-hearted survivor who will do anything to guarantee her own safety, Selena gradually transitions into a warmer character who cares for those around her. And don’t forget her badass abilities – no one can handle a machete quite like her. I think it’s safe to assume that without her, the other characters may not have made it to the end. Less of a classic zombie flick and more an “infection” film, these 2 hours will keep you on the edge of your seat.

Okay so while this film is less horror and more western, I’m still going to include it because it’s about one of the best vampires ever on screen. Sheila Vand shines as The Girl, a lone vampire who stalks the streets of the fictional “Bad City”. Whether at home listening to her vinyl or skateboarding in her chador, The Girl oozes cool. A great character played by a great actress. This film is magnificent, a wonderful and outstanding debut from writer/director Ana Lily Amirpour. The Girl is the defender we all need. Watch this if you’re looking for something a bit more arty and low-key to watch this Halloween. 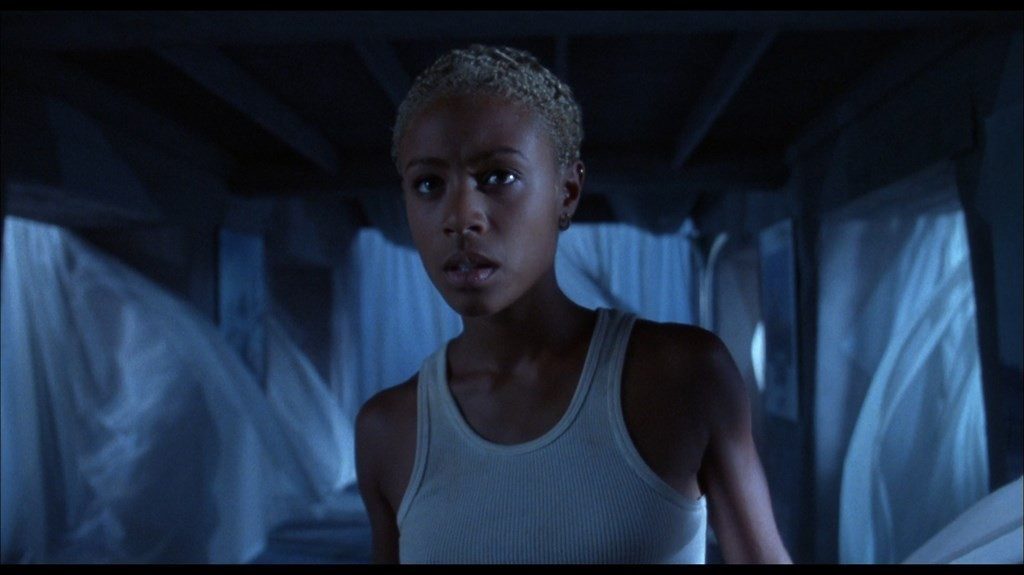 Disclaimer: This film is proper silly – a lot of the demons have septum and nipple piercings! But, it stars Jada Pinkett as the kickass Jeryline. A true final girl if there ever was one. I’m kind of offended that the character is left off so many Final Girl* lists, I mean I get that this isn’t technically a ‘slasher’ film, but if Ripley from Alien can be a Final Girl then so can Jeryline. She is not only a scream queen but also a strong character who uses her smarts to keep alive. This film is a pure 90s popcorn flick, so if you’re looking for something fun to watch with a bunch of mates then look no further. As if a blonde kickass Jada Pinkett isn’t enough? Also shout out to the character Irene in this film as well who deserves a mention alongside Jeryline.

*The Final Girl is a trope in horror films (particularly slasher films) which refers to the last female character to face the killer and survive. The term was coined by scholar Carol J. Clover and since has become a staple in horror cinema. Some of the most famous Final Girls include Nancy from the Nightmare on Elm Street series, Laurie from the Halloween series and Sidney from the Scream franchise.

Noelle Schonwald is Vega, an agoraphobic woman who begins to experience strange happenings when she moves into a new apartment. The film is Columbia’s modern day answer to 60s classic Repulsion, both featuring women alone in their apartments who don’t know if they’re being haunted by their homes or their own minds. Schonwald is great as a women descending into insanity and carries the whole film with her intimate performance. Vega is a great character who may seem distressed and helpless at first but quickly begins to use her strength and smarts to take hold of the situation without anyone’s help.

These are just 8 of the characters that I have found memorable in films that I’ve watched, but there are so many more! If you are a horror fan like me I hope this list gives you a few ideas of what to watch next. While there’s still so much to be done to increase representation of women of colour in cinema, hopefully this short list offers some respite this Halloween.