Credit: all artwork by Mel Lou 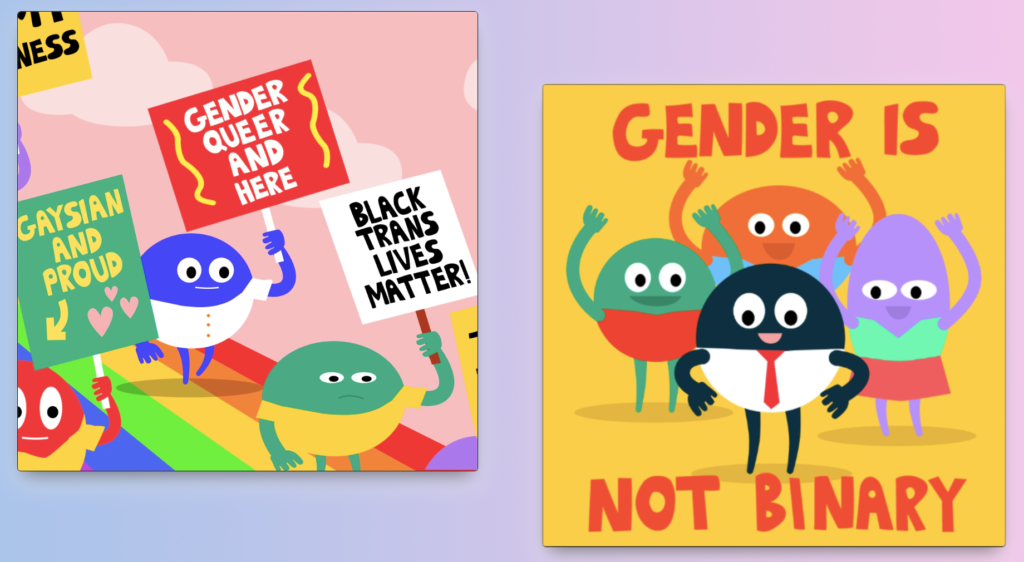 Art beyond the rainbow – creating artwork for Pride

With Pride this year meaning so much more than the parade, gal-dem and Gap sit down with Mel Lou to commission artwork that honours Pride’s revolutionary roots.

When you think of Pride artwork, where does your mind take you? From confetti to rainbow flags, art has always held a special place in Pride, not just as a means of expression, but as a catalyst for conversation and change. Mel Lou, an imaginative non-binary trans masculine creative designer and illustrator of East Asian heritage, has been commissioned by Gap to produce two animations to commemorate this year’s Pride celebration. Describing their style as “playful, colourful, and a bit childlike”, their bright-coloured animations follow the visual tradition of Pride artwork, while subverting the norm by raising questions about the nature of Pride and its function in the lives of QTPOC today.

Growing up, Mel felt excluded from the art world. At a young age, they were made aware of the homogenising force of the white artistic gaze. “I would go to art classes every Saturday as a kid, and there wasn’t a lot of freedom to do what I wanted to do,” they say. “I wasn’t using my imagination very much”. In an industry where a cis-gendered, white-washed history is king, Mel was never afforded the privilege of learning about artists who shared experiences with them. “I used to think of inspirations that I could refer to in my work, and I literally couldn’t think of anyone that wasn’t white in the animation world.”

That’s why as an adult, Mel no longer looks externally for validation, rather they use animation to forge their own narrative. “You should feel inspired by stuff happening in your life. Ultimately you should be your own inspiration,” they explain. In their work commissioned by Gap, Mel is their own muse, using their personal experience to explore the intricacies and depths of their gender identity.  “A lot of people, when looking at my work, refer to it as doodles. But I put a lot of time and thought into my work,” they explain. Mel’s work may be cartoonish in quality but they use the medium of animation to touch on serious subject matter. By adopting “lots of primary colours”, their work pushes the boundaries of taste, whilst simultaneously highlighting social injustice and unrest.

Mel’s first animation is of a gender-queer blob, seen switching between two different outfits (one masculine-presenting, the other feminine-presenting), as they are cheered on by their peers. “Blobs naturally don’t have a gender. It’s nice that they’re all non-binary,” Mel explains. This piece is designed to throw the whole notion of gender binarism into question. In just a short animation, Mel decentres the cis-gendered experience that is privileged during Pride and permeates society on a systemic level. “I wanted to portray the fact that your clothes don’t identify you, and essentially nothing you put on identifies you, only you do,” they add.

In a nod to the political unrest of 2020, the other animation shows more characters marching down a rainbow path holding protest placards. Although the animation is visually consistent to its predecessor, Mel informs me that the message of this animation is designed to be more salient. “I wanted to nod to all of the protests happening around the world and recognise that Pride is a protest in itself,” they tell me earnestly.

But what does it mean to say that Pride is a protest? For queer people, Mel believes that the acts of protest and celebration are not binarily opposed. Queer people can celebrate themselves whilst recognising their political history. Safe spaces like Pxssy Palace, Queer Bruk and BBZ are an integral part of the QTPOC experience, providing a community free from discrimination and judegment. With a smile on their face, Mel informs me that they find solace from their East Asian peers, and this support keeps them optimistic, “being friends with people in Daikon zine has been really rewarding and therapeutic. It’s important to find people that make you feel like you are a part of a community. It has been wonderful being  able to meet other people who are like me.”

According to Mel, Pride fails to be a real safe space for them, and as a result, they tell me, “I haven’t been to Pride in maybe four years now.” This is why they think it is important for QTPOC to seek support outside of the mainstream parade. Despite the floats, music, and parties, Mel feels like they are not afforded the privilege of feeling truly themselves at Pride, noting that for them, Pride feels more like “a celebration now for straight people.” Of course, Mel is not dismissing the Pride parades entirely. They want people to see Pride as fun. “That’s why the first animation is a celebration, it’s important to celebrate yourself not just in Pride, but every day,” they say. “You are celebrating your body, yourself and your sexuality every day. I want people to come away from it feeling uplifted, happy and gassed about who they are.”

Creating an environment that allows you to celebrate yourself as a queer person is a political act in itself. Loving yourself in a world that does not recognise your humanity is a form of protest. That’s the purpose of Mel’s second animation., “I want people to feel a little bit angry when they look at the second animation, because we still haven’t gotten the rights we deserve as queer people”, they say.

Mel also worries about the presence of brands at Pride, seeing the parade as being co-opted by brands that are not interested in making an impactful change. Looking down at their seat, they express their frustration, “Ok cool, a brand can put a rainbow flag on a t-shirt and get celebrities to wear it, but what are you actually doing? So many brands don’t do anything to benefit queer people in any way.” According to Mel, this creates a climate where “awareness” is raised, with no real tangible support or action. A lot of QTPOC creatives come from families that not only fail to accept their queerness but are unable to accept their career choice too. These are the people that need support the most. Even if, like Mel, you successfully enter the art industry, there are more problems ahead. “It’s very stressful once you realise how white the animation world is, because you start to think ‘is my voice going to be heard if I speak out against something that isn’t right?”

So, what positive change does Mel want to see in the future for queer people? Their answer is simple: “I just want to see more acceptance. It sounds generic and basic, but we still haven’t reached that point”.

This article is part of the gal-dem x Gap Pride partnership in 2020, spotlighting and commissioning artwork from the QTIBPOC community.