As a queer Muslim, watching the school protests in Birmingham is exhausting 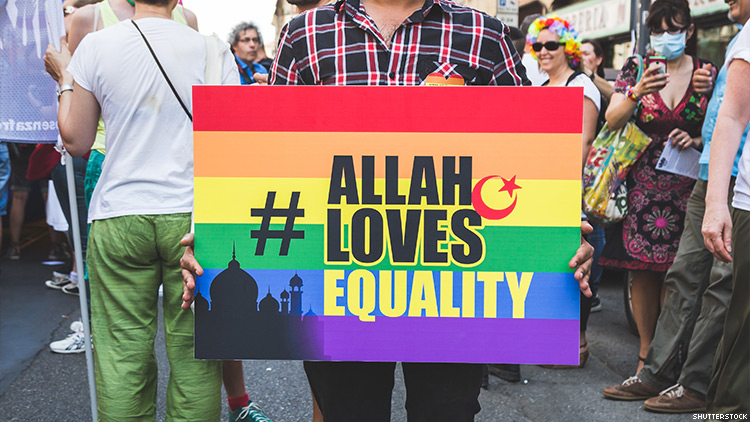 Photography via The Advocate

To be queer and Muslim is to extremely brave. Some straight Muslims I have spoken to are firm believers that you simply cannot be Muslim and queer. The existence of LGBTI+ Muslims is almost constantly denied. When we are acknowledged, we’re often treated as lesser human beings – whether by Islamophobic racists or by Muslims who want to ostracise us from the religion because they are homophobic.

My gay Muslim friends all knew they were gay in primary school, but came to realise differently. One girl watched Britney Spears’ video for ‘One More Time’, and that was it for her. She couldn’t define that feeling of attraction at the time, but we know what it was now.

This is why, in the midst of the homophobic school protests in Birmingham, I find it so frustrating hearing parents say they do not want their child to be “influenced” by queerness on the curriculum.

In the 90s, LGBTI+ visibility was almost non-existent in our world. Yet as young girls, we’d see Britney Spears and want to kiss her without knowing what it meant (not me, I went for brunettes). The feeling of attraction is one of the most natural things in the world, and it doesn’t feel any different depending on gender. If a kid turns out to be LGBTI+, it won’t be because they were taught about LGBTI+ relationships in school. I was taught about Van Gogh at school, and I didn’t go home and cut my ear off. The logic is nonsensical and ignorant.

Another primary school friend of mine knew he was gay the day he picked up an Argos catalogue. This was the 90s, okay – we didn’t have iPhones or tablets to play with, so we’d go through the Argos catalogue, daydreaming about the toys we’d get if we had the money. My friend saw a picture of a man in swimming shorts, and that was it. His cheeks flushed at the realisation that he’d just felt something he’d never felt before, and it felt naughty because the reality of a boy being attracted to another boy wasn’t something he’d ever seen, so he kept it a secret. Society has been so unkind to queer Muslims that many of us will take the secret of our sexuality to the grave.

I want protesting Muslims to understand that their outrage regarding their children being taught about LGBTI+ people is hypocritical. In a troublingly Islamophobic world, Muslims are rightly asking for understanding and tolerance when it comes to Islam – and I am a part of that fight, let that be very clear. But this is why I am astounded that when it comes to the rights of another marginalised group, some Muslims think it is acceptable to protest against the acknowledgement their existence.

What frustrates me the most is that Muslims protesting against LGBTI+ relationships being discussed in schools are quite certainly being weaponised by people who are Islamophobic. Islam is a religion of peace, Muslims are a people of the heart, and the lack of acceptance and kindness I see at these protests is heartbreaking.

Last year I reported in gal-dem that a South Asian woman was attacked by a gay couple on the train who assumed that she was homophobic because she was “Muslim looking”. The flames of Islamophobia are being fanned, and women will always bear the brunt – “visibly Muslim” women are significantly more likely to be attacked. We are being put further in danger.

I can’t control people’s views, but I can speak up when they shout down the street about it or hold up posters that say “it’s Adam and Eve, not Adam and Steve”. I saw a video of one of the protesters on Sky News, and he said “God created women for man’s pleasure” – and I have to say, as a bisexual, if anything was gonna make me gayer than I already am, that was it. His comment has also been shared across all far-right social media pages, again fanning the flames of Islamophobia.

There are also so many incredible queer Muslims out there fighting the good fight, doing work some of us couldn’t dream of being brave enough to do. I just wish they’d get a proper place in the conversation. To those who are Muslim, queer, and feeling alone – there is support out there – online, and from charities too. We are not alone – we’re queer, we’re Muslim, and we’re everywhere.