Beyoncé stans break down the best bits from Homecoming 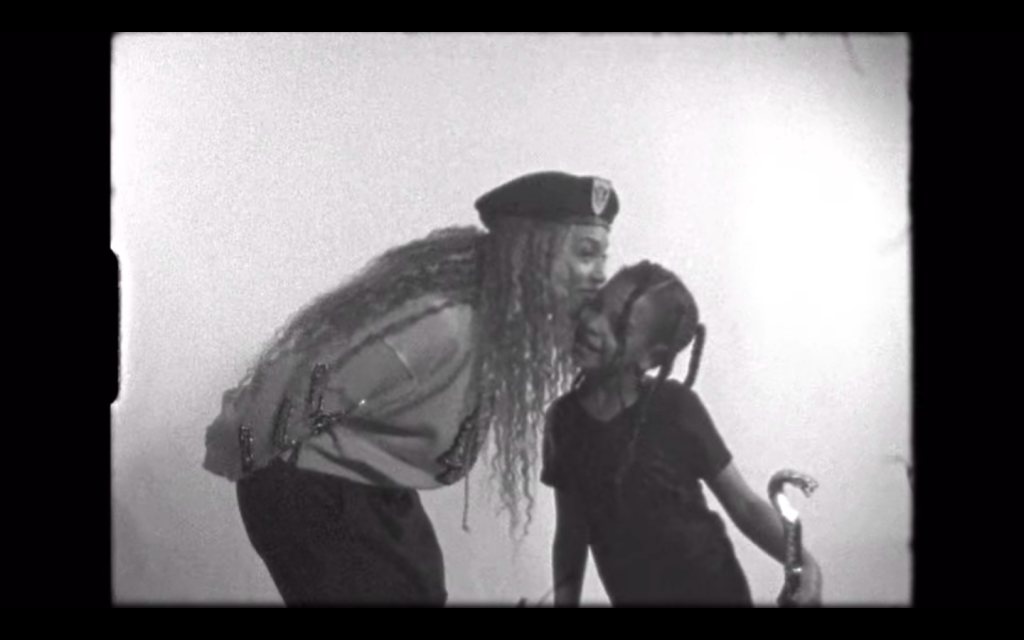 This week, Beyoncé Giselle Knowles-Carter blessed us. Not only did she drop the Beychella live album (on all platforms), she gave us Homecoming, a documentary that shows the process and conception behind that iconic performance alongside sweet details about Bey and the people who were on the stage with her.

Music editor Tara and Lifestyle editor Niellah (who, for the record, are very very big fans of the queen) sat down to discuss the things that really shone in Homecoming: black excellence, balancing motherhood and work, and how much of a visionary Beyoncé really is – as a performer, artist, and behind-the-scenes creative.

Tara: What were your first impressions of the doc? Was it what you expected? I thought it would be more behind-the-scenes rather than a concert film, but the way it was done was very beautiful.

Niellah: Same! It had all the poeticism of Lemonade but with the high-energy of every live kick-ass performance, she’s done over a career spanning two decades.

Homecoming was this beautiful mash-up of both night’s performances interjected with artistically shot videos of the process leading up to the big day. I had seen the first night of Beychella which was broadcasted live, with the now famous beyhive-yellow outfits but, we didn’t get to see the second pink-themed night.

Tara: Obviously, the whole concept speaks to blackness in the States – from a British perspective, were there any things that struck you? All the quotes from black activists and scholars that marked different sections really got to me and made me want to delve deeper into US black history.

Niellah: I know Homecoming specifically expresses the African American experience in regards to HBCU’s, but even I felt this great swelling of pride just seeing all this black excellence on the stage. As a brass player who always felt engulfed by whiteness in my school orchestra, seeing all those incredible black brass musicians up on those bleachers gave me tingles. I felt a part of something that was bigger than all of us. Also, the film was laced with these powerful quotes from Malcolm X, Nina Simone, Alice Walker and Audre Lorde which was a  lovely nod to those who came before her.

Tara: I know you’ve written about this before, so can you tell me a bit about the significance of marching bands, stepping and the whole HBCU vibe?

Niellah: Homecoming was unapologetically and intentionally steeped in blackness. This was a loud ode to Historically Black Colleges and Universities (HBCUs) which have been about since before the Civil War. Beyoncé says she would have attended one herself, her dad attended one and so she’s curating her own HBCU and this is her homecoming, which is undoubtedly one of the biggest events at any HBCU. She had all the key elements – there were drumlines, show band style, marching bands popularised by HBCUs. Stepping, a style of dance originating from African gumboot dancing also go hand-in-hand with HBCU culture. Also, there was a bit of J-setting, a dance popularised in the 1970s by Jackson State University and the dance troupe the Prancing J-Settes. The whole thing is just one big black celebration.

Niellah: Beyoncé went from only having Blue Ivy to now being a mother of three. And we’re lucky enough to get a glimpse at her twins Sir and Rumi, which she has previously and rightfully kept under wraps. How do you think motherhood has now informed her creative process?

Tara: Family is at the core of everything for Beyoncé, and that really shone through in Homecoming. Her motherhood is clearly the most important thing to her, and the realities of being a working mother are not easy – she’s breastfeeding the twins in the breaks from all these intense rehearsals. Also all the moments with Blue Ivy were so, so sweet – the way Bey calls her “baba” when she sings, and the way Blue is overjoyed on the side of the stage in the crowd cheering her mum on, it’s so pure. I think the question of how motherhood has informed her creative process overall is important – the section of the documentary that opens with the quote from activist Marian Wright Edelman, “You can’t be what you can’t see” is most telling of it for me. We meet these other black women who were part of the show – especially the recent mother who’s a dancer, who’s so excited for her children to be able to see this one day.This is the first black woman to headline Coachella (“ain’t that bout a bitch?” is right). This is a legacy that young girls like Blue can look to, feel seen and aspire to.

Tara: It’s so wild that people are trying to invalidate her pre-Coachella diet as setting an unrealistic standard for post-birth bodies, because this isn’t about looking a certain way – it’s about training your body to give this once in a lifetime performance (and also, like she says, about feeling like herself again after a very difficult pregnancy). What do you think about all that?

Niellah: She is an athlete, and like any athlete, you’ve got to train and change your diet. She’s on stage performing challenging routines and singing at the same time. And It wasn’t like she had an easy time of it. I loved the parts in Homecoming where Beyoncé was complaining about being hungry and tired because that’s real – of course, she’s going to be hungry, exhausted, drained, she was pushing herself physically and emotionally to the limit for this performance. Beyoncé does say she would never do that to herself again. There’s something refreshing about hearing her talk about knowing your limits and understanding what you’re capable of. This isn’t some pregnancy snap back from the gram, made to make the average mother enraged, she was training to give the best performance of her career.

If anything Beyoncé was being candidly honest about the realities of childbirth. The documentary starts with her post-twins, she’s still got a bump. Beyoncé touches on how difficult her pregnancy was – she had high blood pressure, developed toxaemia and preeclampsia and even discussed how one of her babies heartbeats paused a few times in the womb.

Niellah: Of course, Beyoncé brought out some guests. Jay Z came out for a loved up performance of ‘Déjà Vu’. Her sister Solange joined her for an adorable dance routine. But I’d say, one of the best parts was Kelly, Michelle and Beyoncé reuniting on stage. What did you think of the nostalgic reunion with Destiny’s Child?

Tara: I wept. I kind of wish they had been interviewed as part of it actually. The way they did songs across their whole career was so emotional, and I had so much time for the throwback to their classic outfit aesthetics – Michelle in the trousers like always! It honestly made me so happy. I think the way she spoke earlier about how she missed out on college, but Destiny’s Child was her college was really informative of this section too – she spent her formative years with them, and that bond is unbreakable, it’s a proper reunion and homecoming. And when Beyoncé called them her best friends, that was so beautiful oh my god. Then followed by the bit with Solange, it was all just such a joyous celebration of sisterhood!

Niellah: What did you think about the composition of the show and also the musical direction which we can also credit Beyoncé for? There were some incredible breakdowns and reimaginings of classics we haven’t heard performed like that before.

Tara: It was so meticulously crafted, it’s mind blowing even thinking about it. The orchestra/marching band element just made all the songs so much larger than life – it was so rich and so powerful! I loved the way they wove in all those extra moments in-between songs for the dancers, the drummers, and the baton-twirling all to shine a little more. And the way it paid tribute to black artistry in those moments was so intricate and excellent too – Dawn Penn, Nina Simone, Fela Kuti, Sister Nancy, even the little nod to Cameo over the credits. But the breadth of her career covered was excellent, and I think it’s telling how she can flit from Lemonade to 4 to B’Day and make it so seamless. She can be a popstar, she can sing like it’s an opera, she can rap incredibly. What a body of work, honestly.

Niellah: I feel like we got to see a completely different, serious side to Beyoncé. We all know she’s a pretty private person and she only shows us what she wants us to see. This was written, directed and executive produced by her. What did you think of her as a creator, outside of just being a performer?

Tara: It just felt like such an incredible insight into her artistry, and how much her work is fully her vision – she is a visionary. And I guess we knew that, but this really cemented it – how deeply involved she was in the details beyond the broad concept, be that costume design, actually meeting and selecting all the individual dancers or devising both the direction of the show and the documentary itself. And eight months of prep after giving birth to twins is no joke, it was such a fascinating look at how the performance of a lifetime required SO much work, so much attention and devotion. It makes you respect her craftsmanship beyond being an exquisite performer.

Niellah: So, how effective did you think Beyoncé’s storytelling was? Parts felt very “indie movie”, grainy recording – generally “artsy” but obviously still super beautiful! Not too dissimilar to her 2013 film, Life Is But A Dream. Also, do we think we will ever get a documentary about Beyoncé that’s not curated by her?

Tara: I have to be honest, there were moments I wanted the visuals to be less grainy and artsy because I want to see the queen in 20-20. However, I respect her having a concept and desired aesthetic and carrying that through. So often the genius of women like Beyoncé is dismissed – because god forbid we take a woman seriously, a pop star seriously, a black woman seriously. The artistry of the storytelling was powerful – the way she intercuts all these intimate moments from her own life, and the community of people who are also part of the creation to add these extra dimensions to when we watch the show is so clever. I like the way she doesn’t speak directly to the camera, and yet it feels so intimate. And yeah, I can’t imagine we will get anything beyond the narrative she wants in our lifetimes to be honest – she is well within her rights to be as private as she wants with the story of her and her family. So that she gives us these curated insights into herself at all – her as a worried mother, as a goofy wife waiting hopelessly for a compliment from her husband, but most importantly her as a serious, thoughtful artist – is a really sweet thing that all her fans can cherish.