Sometimes it’s tempting to try to repurpose our pain as something ‘useful’. Perhaps it hurts more to simply accept that the trauma we experienced was wrong. 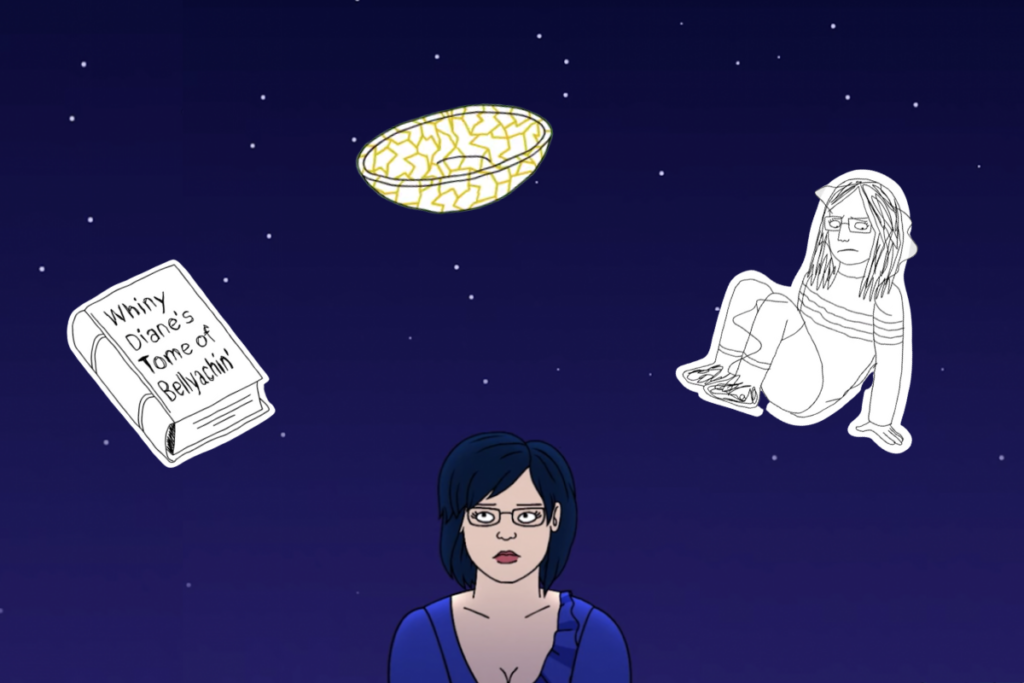 All images via Netflix

Late last month, the final episodes of the last season of BoJack Horseman came out. And, with its departure, I found myself saying goodbye to my addictive yearly dose of nihilism and existential dread. So much more than a cartoon about a talking horse, BoJack Horseman has consistently engaged with heavy and awkward topics. Throughout the self-destructive misadventures of a “Hollywoo” has-been, the show has taught me a lot about loneliness, addiction, change, and the search for meaning.

I’ve never been someone that believed that you have to fully relate to struggles in order to take steps to understand them. But, as a young woman of colour, I find Diane Nguyen, BoJack’s ghostwriter best friend, more relatable than BoJack himself. When I look back on Diane’s storyline, I see the story of young women of colour trying to stay afloat in a world that doesn’t seem to want to give. As a witness to her changing relationships, careers and battles with her mental health, I feel as though my anxieties are being played back to me. This particularly applies to the way she relates to her trauma. If you’re like me, you may have felt exposed to an almost uncomfortable degree during the final episodes – your binge session suddenly interrupted by the creeping question: “wait, is this me?”

In some ways this is surprising, because throughout the show, Diane’s own trauma has rarely taken centre stage. In the early seasons, she exists as a mechanism for BoJack understanding himself, rather than as a person to be understood in her own right. As the ghostwriter of his memoir, she almost takes on a role as his counsellor, listening to and recording his deepest thoughts and memories. She serves to articulate his life in ways that he cannot, which often leads to tensions with him when she doesn’t shy away from highlighting his flaws.

When we do get to know more about her struggles, most of our revelations are BoJack’s too. The extent of Diane’s estrangement from her family, and the intensity of her depression, is information only gifted to us through its relationship to BoJack’s own emotional journey. In the early seasons, she also often serves as a moral sounding board; in the final episode of season one, BoJack confides in Diane, saying: “I really wanted you to like me”, and asks her if she believes that he could ever really be a good person.

In the early seasons, Diane almost functions as BoJack’s counsellor

In the first part of season six, we see her take on this role once again. During his time in rehab, BoJack sends lengthy voicemails to Diane about how he’s doing and all the progress he’s making. Her ability to validate his growth is clearly very important to him. But as the season goes on, with a lot more distance between them, we get to know Diane as an individual rather than simply a point on BoJack’s moral compass. She is no longer the ghostwriter of his memoir – a job that literally centres around the life of someone else – but someone with far more autonomy over what and who they wish to write about.

The tenth episode of season six, “Good Damage”, follows Diane as she tries to put all of her past trauma to “good use”. The subconscious exploitation of her trauma is strung out in an episode where she attempts to make her misery useful. After leaving the hedonism of “Hollywoo” behind, she moves to Chicago, goes on antidepressants and is commissioned to write her memoir. But as she tries to write about the pain from her life – her relationship with her father, other men, and her childhood bullies – she finds the whole process foggy and can’t seem to pin down where the trauma started or what she could possibly have learnt from it all. The same suffering that was once used as a plot device for BoJack doesn’t actually aid her own healing. At times she even questions whether she deserved the constant bullying and neglect she experienced, or whether she was wrong to position herself as the victim.

“Sometimes it feels easier to constantly try to repurpose our pain as something ‘useful’ to other people; perhaps because it hurts more to simply accept that the trauma we experienced was wrong – that we didn’t deserve it”

Throughout the episode, she also compares her story to kintsugi – the popular Japanese art of fixing broken pottery, where broken fragments are bonded back together with gold to form a beautiful product. The comparison makes sense; after all, there is sometimes something appealing about the idea that our trauma makes us beautiful and unique. Through broken parts, we can still be useful. But as she begins to give up on the memoir, she concludes “all the damage I got isn’t good damage. It’s just damage […] all those years I was miserable were for nothing”.

This line, in particular, stuck with me. It forced me to reflect on the ways that I have dealt with my own trauma, and the ways I’ve tried to make sense of it all. It reminded me that the desire to make meaning out of trauma can be just as damaging as the trauma itself. I know I’m not the only one that has tried to justify past hurt as giving me some sort of duty to serve others – to heal them, or to help them understand themselves better. In the past I’ve poured my heart and soul into (often emotionally exhausting) recounts of my past, as though my pain might help others. There have been times in this process that I have worn my pain with honour and pride.

Throughout “Good Damage”, Diane’s relationship with her trauma is called into question

Sometimes it feels easier to constantly try to repurpose our pain as something “useful” to other people; perhaps because it hurts more to simply accept that the trauma we experienced was wrong – that we didn’t deserve it. We find comfort in believing that pain has a purpose, but then also burden ourselves with the task of trying to find out exactly what that purpose was. Our pain makes us both the teacher and the lesson. But sometimes there is no lesson – not everything is “useful”, particularly experiences that are unjust. “Good damage” is a spiral, one that relinquishes the people that hurt us from taking accountability for what they did, and puts far too much responsibility on us.

For these reasons, Diane’s story, and her place as a secondary character, is so important in addressing narratives around trauma. So often, when trying to tackle our demons, we hope that we come out the other side as a beautiful kintsugi bowl: useful and whole. We pray that, at the very least, our pain can be the end of someone else’s. But, sometimes the search for meaning just leads to more pain. Sometimes, being “useful” is not the healing you need.