‘It was my way of saying thanks’ – Brittany Howard on her new in memoriam project, Jaime 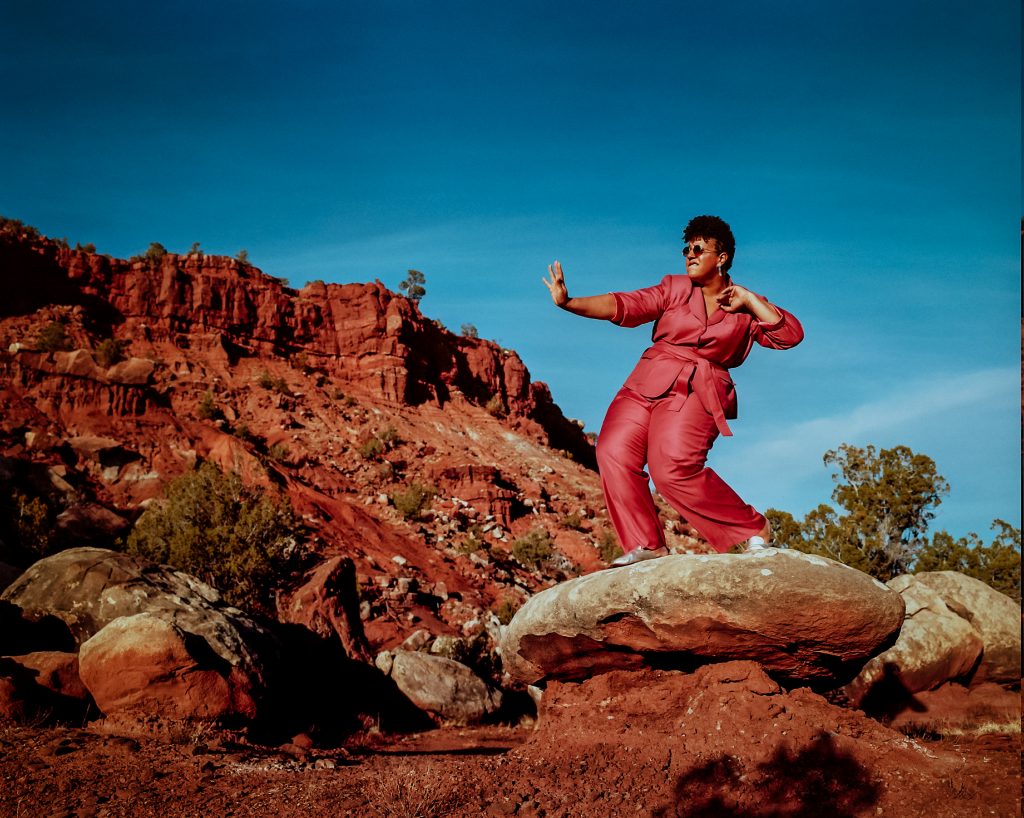 Brittany Howard’s voice and expansive career have been magnificent to witness. After a thriving career in bands – including as the lead singer of the award-winning Alabama Shakes – this year the 31-year-old has returned with her first solo project, Jaime. A heart-warming, complex exploration of her life, her childhood and her family, Jaime was named after her older sister, who passed away from retinoblastoma (eye cancer) in their teens. It’s she who Brittany credits with shaping her love of music – but also shaping her character.

Recorded after a cross country drive, taking Brittany from Nashville to a small house in Topanga, California, in this project we get to explore Brittany’s life through a collection of memories and sounds. ‘21st Century Metal’ is powerfully political, ‘Stay High’, one of the first releases from the album, is a smooth, summery song with a wonderful video exploring her community in Alabama. And ‘Georgia’, the jewel in the album, is a soft, imploring first-crush love song.

Brittany is undoubtedly redefining and reclaiming what a rock’n’roll artist sounds and looks like – channelling the spirit of the genres’ foremothers, like Sister Rosetta Tharpe and Big Mama Thornton. Watching her perform is a visual and audible treat. Moving the length of her electric guitar with ease, she sings with a voice that can turn into a demanding roar and shrink to a soft and controlled hum. Her lyrics roll out honesty, joy and everything in between.

We spoke on the phone about leaning into a solo career, Terry Crews starring in her music video and so much more:

gal-dem: why was 2019 the year to release your first solo project?

Brittany Howard: I didn’t think too much about it really, I just wanted to create something in a way I’ve never done before, having full control over the whole project. Being my own producer, writing my own songs.

The album is named after your sister Jaime. What role does she play?

My bigger sister, she taught me everything I knew about using my imagination. She got me into the arts, into being a creative person. Without her, I wouldn’t have fallen in love with music and creativity like I did. Naming it after her was just my way of saying thanks.

“My bigger sister, she taught me everything I knew about using my imagination, she got me into the arts, into being a creative person”

Which track do you think would be her favourite?

How do you think this album explored your identity in ways that other projects might not have?

What I’m saying in the songs are my memories, very much wholly me. It couldn’t just be something you could dance to. Everything was really informative, everything was interconnected. I think I had to go and do this project, produce this project, have all the right sounds, use my voice in different ways to get the full story out there.

So, does Georgia, from your love song ‘Georgia’, know about the track? I’ve never heard a song like it!

It wasn’t to any particular person, I just really love the name Georgia. It’s one of those songs, as soon as you hear the name ‘Georgia’, it instantly takes you back to Ray Charles, and the love song he wrote. You know it’s a love song and it’s a beautiful name to say – it’s full of beauty. Like you say, you’ve never heard a song like that, and that’s why I wrote it, I’d never heard one like that before. I was like, ‘Oh this could be something really interesting’. It was really moving to me as well.

What advice do you have for young black LGBTQI+ women who might want to express romantic love through their music?

The closer you are to yourself and when you create from a place that’s like yourself, the more people are going to relate to it and get your story. I think it’s best to write without any angles and just to be uniquely yourself.

How did you get Terry Crews involved in the ‘Stay High’ video?

I wrote him a letter. I was writing the treatment to it and I knew I wanted it to be this big, intimidating guy, but I also needed him to be really sweet. He really reminded me of my dad because my dad is hugely intimidating but he’s actually just like a little kid. I wanted someone who was really big and strong, and just powerful – and to do these little dances and sing the song in falsetto. That’s what I wrote to Terry. ‘There’s no one else to do this but you and if you don’t want to do it I’m not going to do the video.’

So, it’s meant to be your dad, and your family in the music video?

Yeah, it was. I shot the video in my hometown, everybody in the video is friends and family my cousins my grandmother, people I went to school with people who work in the community. And one thing I loved about it was showing people how different everyone is where I’m from. People see Alabama and instantly they go to segregation, they go to the civil rights movement, racism… Alabama does not have the greatest reputation across the world. I wanted to show people, ‘Look, everybody is different colours, everybody gets along’, and within that community was my family. It was a black man, a white woman and two little brown girls.

So, why did you decide to cameo in your own music video?

I don’t know! I’ve actually never been in a music video, that was actually my first one. It was really, really fun dressing up as different people.

In fact, I didn’t recognise you as the cashier

I had a nice wig, nice plain clothes. That’s funny, that grocery store is where we used to shop.

‘He Loves Me’ is all about God – what’s your relationship like with God and church growing up compared to now?

I grew up in Church of Christ and I grew up in the baptist church. We did that until my sister passed away – that’s when my family were grieving so I didn’t have to go to church anymore. My mother started buying all these spiritual books and she started her own journey into – I don’t know, whatever is out there. I used to read those books when I was little.

For me, and only me, Christianity was really limiting on what’s all out there – these rules based on a time that was thousands of years ago. Everything’s changed now – spiritually sits in a timeless place and it’s much more directed towards inclusion. And I think that’s what the Bible is trying to say, but people take it and make it mean whatever they want it to mean. Spirituality, to me, was a place where I felt accepted and most loved.

“Alabama does not have the greatest reputation across the world. I wanted to show people, ‘Look, everybody is different colours, everybody gets along’”

I know you spoke a bit about filming in Alabama recently, but what was it like growing up there in an interracial family?

I was too young to realise a lot of things, but for my parents, it was really hard. It’s a true story: my dad goes to visit my mum, stays the night, wakes up the next morning and someone had cut off a goat’s head, put it in the back of his car, slashed the tires, broke the windshield, basically saying, ‘Don’t come back here anymore, what you’re doing is wrong’. Since I wrote the song [‘Goat’s Head’] someone else had said, ‘That’s actually happened to my mum’.

In ‘Goats Head’ you sing: “I guess I’m not ‘posed to mind ’cause I’m brown, I’m not black but who said that?” Have you struggled with your identity or is this something that’s been pushed upon you by external forces?

It was something that was pushed upon me, growing up because [growing up] I had an understanding of ‘Well, my grandma’s white and I love my grandma, and my other grandma’s black and I love her too’. You don’t think culturally about how that makes people feel. They want to paint you with a big brush. Growing up with my cousins (I love my cousins we’re super close), they would always say: ‘Why do you listen to white music?’ I’m just like ‘I don’t know! I like this music. It’s good’. As far as identity goes, it was strange because I am black and I go through the world black. But then there are things me and my mum can’t relate on. She doesn’t really see me like that, but to everyone else in the world, I’m a black woman.

So what kind of music were you listening to growing up?

Third Eye Blind, 90s alt-rock, alternative rock like The Cranberries. I listened to everything!

I know you’re a Libra. What do you think are some of the best Libra traits you think you have?

I don’t want to sound self-aggrandising but I think Libras are cool at making decisions. A lot of people want to say that we don’t make decisions but actually we make the right decisions because we’ve thought about it. It takes a long time because we see things from everybody’s point of view. Very fair people, very charming, beautiful people.

This interview has been edited for length and clarity. Brittany Howard plays the O2 Forum Kentish Town, London on 10 March 2020