As the Tory government announce a stream of socialist policies they said were impossible, the UK is finally seeing what the left have known all along. 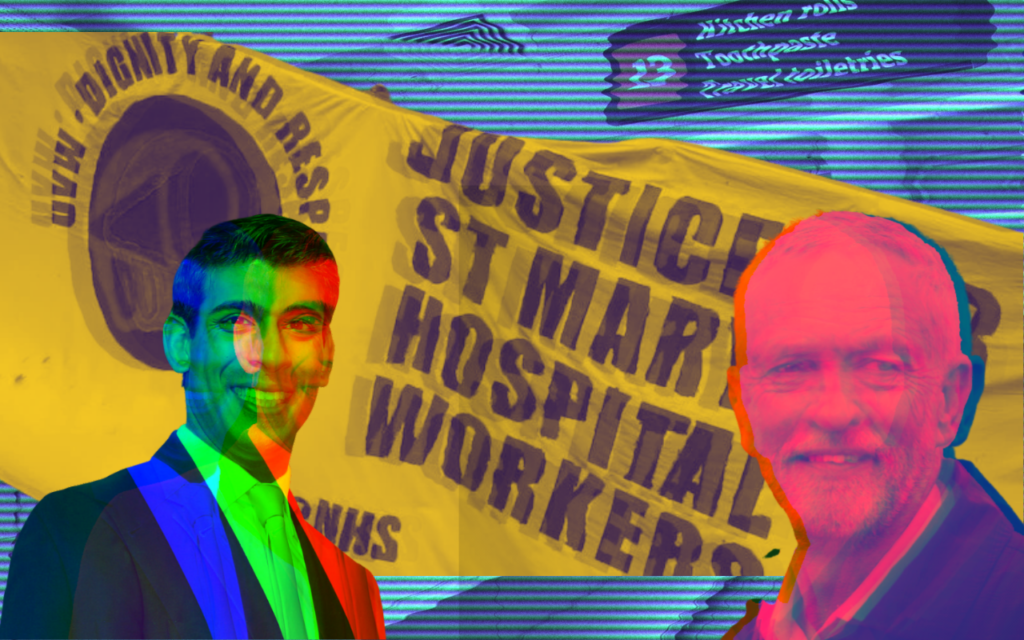 On Tuesday, ITV’s political editor and the government’s recent mouthpiece of choice, Robert Peston, published a blog in right-wing rag The Spectator. Titled “Boris must borrow from Corbyn’s playbook to prevent a coronavirus crash,” it argued four major points: the vulnerable will need more help to support themselves during the crisis, people need (financial) incentives to engage in behaviours that keep everyone safe; that if the predicted one-fifth of employees end up self-isolating then we’re looking at systemic collapse of our current way of living; and that the government and Bank of England should insure companies at risk of failure. Robert went on to quote a Tory minister on the government’s plan for the next year to minimise the effects of the devastating economic impact coronavirus looks certain to cause.

“We’ll find ourselves implementing most of Jeremy Corbyn’s programme,” the Tory source said.

In case it needs spelling out: this is socialism, baby!

One can only imagine just how furious The Spectator’s red-faced and right-wing readership would be upon seeing those words. But for those on the left, it’s almost as rage-inducing watching the UK sleepily wipe the crust from its collective eyes and take proper stock of the dire position it’s facing – and the left wing policies that could alleviate it. Now that a crisis threatens to wreck the livelihoods of those normally comfortable under capitalism, they’ve joined the pleas for increased state support that were previously confined to marginalised groups and their allies.

In a little over four months, covid-19 has brutally exposed the failings of capitalism.

First the cracks appeared on the frontline. The effects of a decade’s worth of cuts to the NHS and privatisation were laid bare as the service began to take the strain of the virus’ spread. Week-long waits for testing were reported and helplines were overwhelmed with calls. When callers did get through, people staffing the line were unable to offer much in the way of practical advice as official government strategy was yet to be announced.

As the crisis progressed, it emerged that the NHS is critically short of ventilators needed to save lives, having only 5,000 on hand. The government scrambled to set up a supply chain to build 20,000 more within the next two weeks, with hapless Health Secretary Matt Hancock even tweeting a call for any manufacturers.

This was followed by an equally worrying admission that there simply weren’t enough beds for the projected 7.9 million people who, according to government forecasts, could be hospitalised over the next 12 months. The spotlight turned to private hospitals – a capitalism special – and the estimated 8,000 beds lying empty “waiting for the wealthy to fall ill”. In Spain, the socialist government has nationalised all its healthcare providers to tackle covid-19. In the UK, the power is firmly in the hands of the private companies. Sure, the government could use the beds, said Spire, the body who owns them (and makes 25% of its income from NHS contracts). But at a cost of £2.4 million a day. Of course, a fully nationalised health service would prevent this sort of disaster profiteering.

Meanwhile, thanks to underfunding, staff shortages leaves healthcare workers (of which one in five are BAME) on poor pay, long hours, and stretched to breaking point. The NHS has also started requisitioning final year medics, postponing up to one million operations and redeploying workers in areas outside of their speciality. Elsewhere, healthcare workers devastatingly speak of preparing themselves to “bury their colleagues,” during live TV interviews.

Last week, underpaid cleaners walked out of Lewisham Hospital– the first in the capital to treat a coronavirus patient – and went on strike after external contractors ISS failed to pay them full wages for the second time in two months and provide proper protective gear for staff to work in. Backed by their union, GMB, they’re one of many groups of workers who have turned to strike action and are relying heavily on union support.  Trade unionism is a traditionally left wing practice and once again growing in popularity. In recent months a series of victories by the likes of UVW have demonstrated the effectiveness of collective organising. But would it have reached this stage if the workers were already being given the proper pay and support the left-wing have been advocating for?

The plight of employees in general is also forcing some serious questions to be asked about the precarity of workers rights in the UK. Like: why doesn’t Universal Basic Income – an unconditional regular payment made to all citizens – exist? Why is statutory sick pay £18 a day when the estimated average living wage is £9.30 an hour? Why is that £18 a day only available to those who make over £118 a week, a figure that disproportionately excludes women of colour (WoC) who experience intersecting gender and racial pay gaps? Why is there no safety net for anyone who is self-employed? Why is the government avoiding substantially subsidising businesses during the crisis, particularly hospitality and retail industries which will see hundreds of thousands out of work?

Data also shows those who can “work from home”, as the government advises, are more likely to be well-paid individuals from wealthier households. Whispers already abound that schools are being kept open thanks to fears that thousands of parents currently working in healthcare would be unable to afford childcare costs, and subsequently be pulled away from work to look after their offspring – something that could be offset by free childcare initiatives previously proposed by the left.

It’s also clear that the infrastructure needed to prevent sick employees – who feel they have to keep working to stay afloat – from spreading disease further are ideas proposed by the left: increased sick pay, on par with the likes of other European nations (which is an average of £245 per week) and an extension of the grant to all workers, including those who are self-employed.

Sadly, layoffs are already in full swing. But the impact of these could be immediately mitigated by the introduction of measures like a Universal Basic Income and ensured pay for a period for all those who’ve lost work as a result. Denmark, for example, has promised 20 days pay for people fired due to the crisis, payouts matching 80% of the average income of the self-employed for the last three years (capped at £48,000) and subsidies for those caring for coronavirus patients. The Tories have already scrapped the Minimum Income Floor used to decide how much Universal Credit someone is entitled to (which has been heavily criticised for not taking into account fluctuations in earnings). It’s hardly a stretch to extend that further. It cannot fall to GoFundMe and JustGiving to pick up the slack when it comes to thousands out of work.

A roof over our heads

Then there’s housing. While the Chancellor has announced a three month “holiday” on mortgage payments for homeowners, so far no such similar measures for the 20% of the UK population that privately rent have been forthcoming. Which means, depending on your landlord’s mortgage, they can continue to collect your rent, while their own debt (the mortgage) remains frozen, with slashed interest rates. In short: they can pay the mortgage off a lot quicker and at a lower rate.

With people of colour and migrant communities far more likely to rent than people who identify as ‘white British’, in every socio-economic group, it’s clear who will be more affected by no rent freeze or “holiday”. In comparison, even centre-left countries like France have suspended the payment of rent and utility bills to ease the strain. We can’t rely on the goodwill of landlords to independently relinquish their right to collect rent – they see their property ownership as a legitimate form and fair form of income and will want to cling ever tighter to the regular payments in these uncertain times. Which is why strong measures urgently need to be announced to relieve renters  – and include a ban on evictions. Anything less will endanger thousands and help increase the number of homeless individuals in the UK.

And as for the estimated 320,000 people already experiencing homelessness or rough sleeping, something curious has happened. After decades of inaction, the government is quietly freeing up funds to tackle a crisis it has resolutely ignored until now. Suddenly, a £3.2 million emergency fund has been found, with councils asked to provide accommodation and services for rough sleepers. Like so many other aspects of life under capitalism that we have always been told are just “the way it is”, coronavirus has caused the stark realisation that actually… it doesn’t have to be that way.

And that’s the rub, really. Others are finally seeing what the left have been saying all along: that there has to be more than this, that with just a few simple measures we can create a society that supports everyone, that the false meritocracy and precarious cruelty of late-stage capitalism can only lead to disaster. But the sight of right wingers, who were months earlier scoffing “anyone but Corbyn”, now furiously tweeting the Prime Minister asking for help with their hospitality businesses, is hardly satisfying. Ok, it’s a little satisfying; but that small flicker of smugness soon extinguishes when the full severity of the situation is recalled.

It’s hard not to imagine that the policies the left have championed for so long could have greatly mitigated the impact and anxiety wrought already by coronavirus. It’s even more difficult not to mourn our lost decade of austerity and suffering now recent events show that it was not a necessity, but a choice.

But at least perhaps now the self-interested might realise what the rest of us knew all along: we weren’t cheerleading socialism for our own sakes. It was for everyone’s.