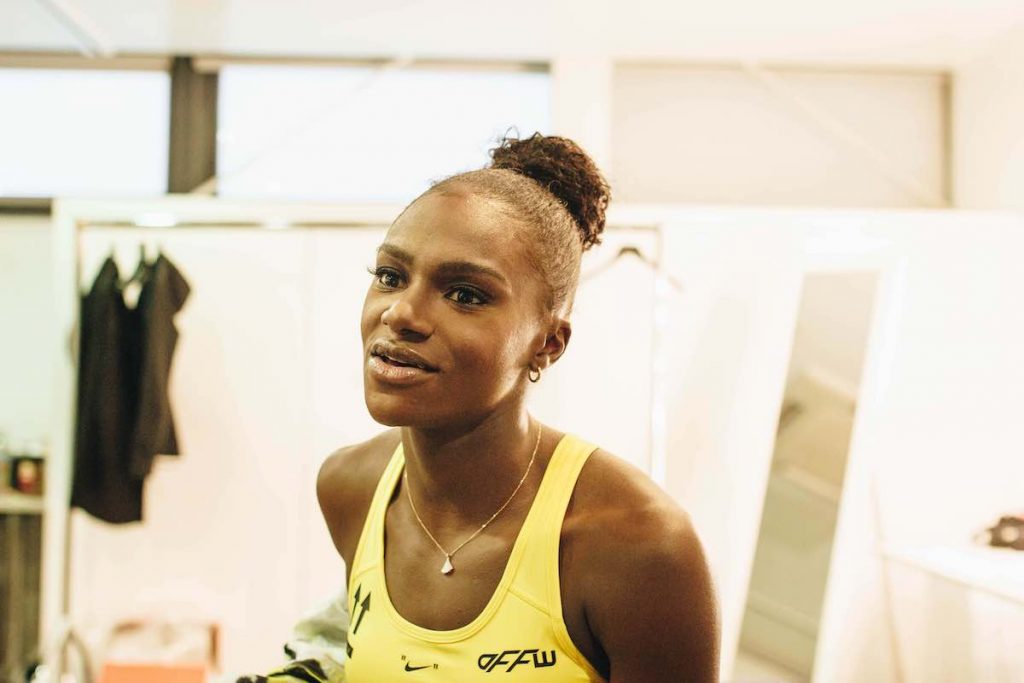 The fastest woman in the world, Dina Asher-Smith speaks to gal-dem about training, competing, visiting schools and why she thinks everyone should try sport.

I am greeted with a warm smile and a friendly hug from 23-year-old Dina Asher-Smith, who is now the fastest women in British history. At the IAAF World Championships in Doha last month, she won gold in the 200m race and broke the national record in the process. She also achieved second place in both the 100m and the 4 x 100m alongside teammates Asha Philip, Ashleigh Nelson and Dary Neita. Dina is passionate about diversity in sport, particularly when it comes to encouraging young women to get involved in athletics.

Dina is also the face of Nike and Virgil Abloh’s Athlete in Progress running collection. The collection is inspired by the style and confidence of track and field athletes. In the week prior to the release, Nike and Off White hosted TRACK & FIELD’ C/O VIRGIL ABLOH in collaboration with Bone Soda to celebrate. The event, which took place in Lee Valley Athletics Centre in North London, involved 12 teams competing in a range of activities in order to win a trip to Paris to attend Virgil’s Off White show. It’s here that I meet Dina for the first time.

The 200m World Champion was kitted out in the latest pieces from the Athlete in Progress range, a neon yellow sports top and leggings, grey and pink Vapor Street trainers and a striking yellow and black tie-dye jacket, which she wore loosely hanging off her shoulders. Dina has a calm confidence with a softness about her that is really endearing.

As we sit down, she warns me that she is feeling a little ill, but despite being under the weather, her radiance shines through as she giggles with her friend Channing who’s also in the room. “I’m laughing because Channing and I go way back, she’s one of my best friends and I’ve never interviewed in front of one of my friends before,” she explains.

I was curious about whether Dina thought her personality on the racing track as a bold, fearless superstar athlete was the same as when she was chilling with friends. “Whilst I’m very focused and dedicated, I’m naturally a sunny, happy person and always have fun off track,” she beams, “so, I like to carry that through to when I’m on track simply because I don’t want to change. I might want to win and be the best in the world, but ultimately I’m trying to have fun and be myself.”

We’ve seen women’s sports become more popular over the last couple of years and have witnessed some amazing performances from the likes of Serena Williams, Megan Rapinoe, Shelley-Ann Fraser-Pryce, Alyson Felix and Simone Biles to name a few. However, assumptions are still sometimes made about the appearance of sportswomen. “People are always shocked that athletes wear makeup,” Dina tells me. “And I’m just like ‘of course!’ I’m on TV, and if I do well then my pictures will be all over the newspapers. This is the time to be wearing makeup!”

Looking back over 2019, it’s been an incredibly eventful year for women in sport. From the Women’s Football World Cup and the Netball World Cup, to the US Open and the IAAF World Athletics Championships, we’ve seen world-class, record-breaking performances all over the world. Just last week, the record for the highest attendance at an England women’s football team home fixture was broken, when the Lionesses played against Germany at Wembley. However, Dina thinks that “every year is a great year for women in sport”, not just 2019.

“Each year there are women winning in whatever championship they’re competing in,” Dina reflects, “The only thing that has changed recently, is that there has been a lot more publicity, which is why 2019 appears to be a pivotal year for women’s sport”. Hopefully, this increased coverage will engage more women who think that sport “isn’t for them.” Part of the challenge is changing people’s perceptions of what a sportswoman looks like, showing them that there isn’t just one type of woman who participates in sports and highlighting the range of sports and activities that they can get involved in. I am the captain of my company’s netball team and our key focus is to encourage colleagues to get involved in sport and prioritise their work-life balance. As a result, we’ve seen colleagues from a range of abilities and ages join the team, from interns to directors – some of whom have never played netball before. In any given industry, there is a diverse range of women within it, and sport is no different. “We are literally just women who are doing physical activity – anyone can do it”.

Alongside increasing the representation of women in sport in mainstream media, it’s also important to educate women on the benefits of sport, such as improved physical and mental wellbeing. Sport can often change our own perceptions of ourselves in a positive way, especially in a world where women are constantly exposed to unrealistic beauty standards. For Dina, being an athlete is about more than just changing what her body looks like. “When lots of women think of their bodies, the first thing that we may think about is the aesthetic,” Dina explains. “For me, I’m always like ‘I need to get my quads stronger, I need to be running faster’, and then maybe when I’m chucking on a dress before a night out, then I’ll think about what I actually look like.” It’s vital that parents, educators and role models encourage women to view their bodies in a range of ways –- not just in the way that society tells them to.

Dina’s attainment-focused mentality has developed throughout her sports career and translates into other aspects of her life. She describes graduating with a BA (Hons) in History from King’s College London as her proudest achievement to date, outside of athletics. Spending time supporting young people is particularly close to Dina’s heart. “I love going into schools and seeing children get really excited over athletics. I went to one school and their Year 6 class made a film for me and learnt a song for me – it made me cry!” Something as seemingly small as Dina visiting a school clearly has a massive impact on the aspirations of the young children who meet her.

And this is only the beginning – it’s easy to forget that Dina is only 23 years old. “To be fair, my proudest moments are coming. There are a few things coming up that I can’t talk about right now, but I recently had a call about something that I’m really excited about.” She doesn’t tell me anymore, leaving a wave of mystery in the air. “My proudest moments occur when we manage to do something that makes people sit up and listen,” she says. “Working with a brand like Nike gives me the opportunity to continually change people’s perceptions of sports and help them see that you don’t lose your identity by doing it. I hope that the stuff that I will be doing next year will go on to further that and make more young women see that pursuing a career in sport is a viable pathway.” I guess we all need to watch this space to find out what else Dina has up her sleeve in 2020 and beyond.

“I’m trying to mention Ru Paul in every interview I do, to speak it into existence!”

In between training, competing, visiting schools and taking part in campaigns, I wonder how Dina has any time to wind down. She mentions that she really values spending time with her friends, many of whom she has known since childhood. We dive into music and TV shows she’s enjoying right now. Dina enthusiastically gets up to retrieve her phone and open Spotify. “Right now I’m going through a bashment phase and I’m having the best time with it. But the top songs on my Spotify playlist are ‘Dumpling’ by Stylo G, ‘Walking Trophy’ [by HoodCelebrityy] and ‘Juice Remix’ [by Ycee ft. Joyner Lucas]. I’m also loving ‘John Cena’ [by Sho Madjoziby], I’ve been warming up and training to that song for months now.” In TV, Dina tells me about her love for the Great British Bake Off and her obsession with Ru Paul’s Drag Race, which she dreams of one day being a guest judge on.  “I’m trying to mention Ru Paul in every interview I do, to speak it into existence!”.

As we wrap up and get ready to check out TRACK & FIELD, Dina takes some time to speak to a young girl who is an aspiring athlete. They chat about training before taking a few photos together. This perfectly encapsulates Dina as an athlete and a person; she’s always making sure that she is inspiring and investing time to prove that sports should be accessible to all. As the TRACK & FIELD event kicks off Dina’s final words of advice to the competing teams are “just have fun and win!” – a motto that she clearly lives by.