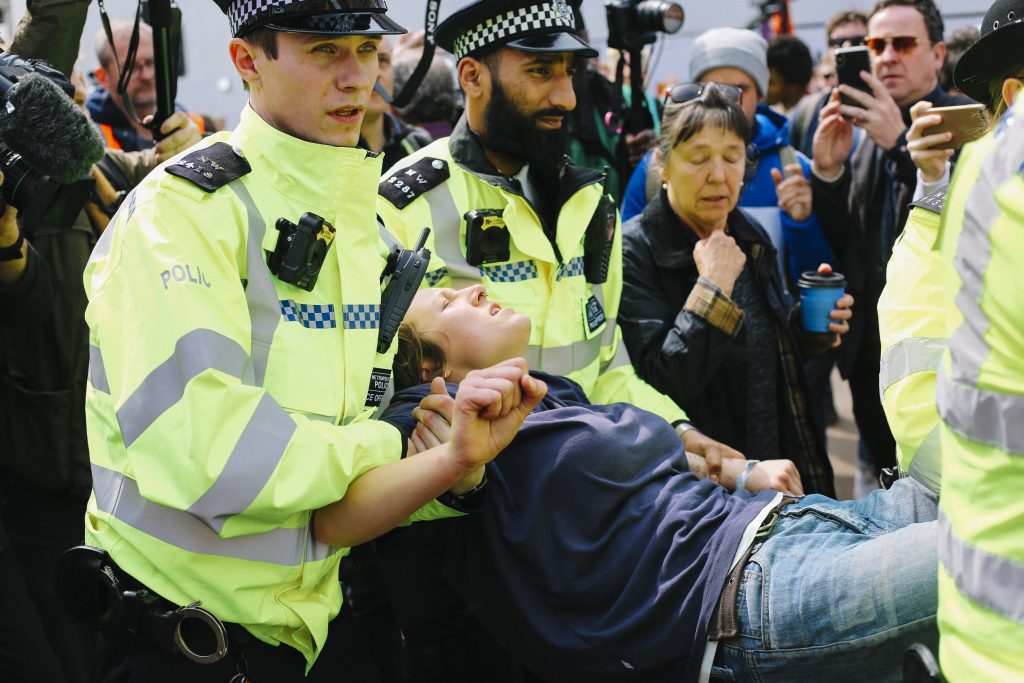 Extinction Rebellion (XR), a movement whose civil disobedience actions seek to highlight the “global ecological emergency”, is the climate change campaign group your mother never bothered to warn you about. This week, XR began a two-week “shutdown” in central London to “demand decisive action from governments on the environmental crisis”. The shutdown has been framed by the collective as a rebellion, a festival, and everything in between. Concerns have been raised by climate justice organisers that their approach lacks understanding of the root causes and impacts of climate change, and their tactics of engaging with law enforcement fail to acknowledge the long history of police brutality against communities of colour. XR’s primary objective? Get arrested.

On their website, XR includes arrest and jail-time as a key tactics to “shake the current political system” and raise awareness about climate change. In a “prison workshop” published on YouTube in 2018, an XR organiser outlines the group’s prison strategy. The video acknowledges that the prison system is “really messed up” and “not really the place to be”, but that nonetheless that the status quo is “killing us and needs to be disrupted”. This rhetoric, which is characteristic of XR’s campaign literature, fails to recognise that the very institutions they are so keen to interact with such as police and prisons, have been systematically killing people of colour and lacerating our communities since day one.

In a Tweet posted on 16 April, the group states that “Most police are reasonable people. Some are idiots. No different to the rest of society. We hope that the police will soon join with the rebellion, either passively or actively, in a move that would force the government to the negotiating table.”

XR members’ ability to perceive the police and criminal justice system as benign structures who might even join their “rebellion” smacks of race and class privilege. A follow-up tweet quickly added that the police are institutionally racist, but the inherent contradiction in these two statements is revealing. XR’s approach may at worst callously overlook the historical treatment of communities of colour by the police, and at best be messy and ill-considered.

The group’s principles and values include that “We live in a toxic system, but no one individual is to blame.” Whilst finger-pointing is unlikely to stitch up the holes in the ozone layer, identifying the key players in global ecological degradation is a necessary step for adequately responding to the issue. The seeming lack of interrogation of the unequal ways in which climate change affects individuals and populations exposes significant flaws in XR’s approach.

In 2016, members of Black Lives Matter UK chained themselves together on a runway at London City Airport to protest the disproportionate impact of climate change on people of colour (PoC) worldwide. In a video shared by Black Lives Matter UK on Twitter, members explained that the UK is one of the biggest per capita contributors to global temperature change and that seven out of ten of the countries most affected by climate change are in sub-Saharan Africa. This means that climate change originates in the wealthiest and most powerful countries in the world, and the shockwaves are felt most dramatically in countries who, due to histories of colonialism and resource exploitation, are least resilient to its impacts.

Movements such as Black Lives Matter which fight for climate justice argue that the impact some states have on the planet is about much more than “biodiversity loss” and “greenhouse gas emissions”. Environmental justice groups such as Indigenous Environmental Network, Global Grassroots Justice Alliance, and the Climate Justice Alliance centre demands and actions which recognise the way that privilege protects some people from the impacts of climate change. These groups foreground the critical role of indigenous peoples, traditional ecological knowledge and grassroots solutions in mitigating and adapting to climate change.

Alex, a climate justice organiser with Black Lives Matter UK expressed concern that Extinction Rebellion’s approach sidesteps much of the progress that was hard fought for in the climate movement. An open letter published in 2015 by Wretched of the Earth, a coalition of indigenous and PoC-lead climate justice groups, described their experiences of having indigeous communities’ banners in the People’s Climate March of Justice and Jobs replaced with a group of people dressed in animal headgear. The letter describes PoC climate justice organisers as being “consistently erased as frontline fighters”.

“We have spent time critiquing, challenging, and pushing the climate movement,” Alex explains. “Some really great stuff has come out of that. For example, the Stansted 15 [15 activists who successfully grounded a mass deportation charter flight in 2017 by locking themselves in front of the aircraft’s wheel] came from an environment background and used the tactics of climate justice campaigning for a different purpose. Extinction Rebellion are just ignoring all of that, and starting from square one again.”

Earlier this week, Ben Smoke, one of the Stansted 15 who faced charges including a terrorism-related offence carrying a possible life imprisonment sentence, wrote for the Guardian warning that Extinction Rebellion protestors should be “careful what they wish for”. Smoke acknowledges the inherent privilege in seeking arrest for protesting, and notes that the trial support incurred “unfathomable amount of resources, time, money, and energy from across the movement”.

Alex also has questions around XR’s preparedness for engaging with police. “[Getting arrested] is definitely part of a repertoire of resistance, but the way [Extinction Rebellion] are doing it is quite dangerous,” Alex remarks. “I don’t know what trial support they have; they aren’t going to have all 500 people who have been arrested trialed on the same day. That means you are going to have really isolated people going through quite traumatic experiences.”

Questions are being asked about what happens next: the “solutions” presented by Extinction Rebellion include the implementation of a Green New Deal which would seek to shift the UK to a renewable economy by 2029. Alex explains that such an approach fails to recognise Britain’s fundamental role in climate change globally – primarily through aggressive extractive industries such as fracking and mining.

She adds that Britain, through the World Bank and the International Monetary Fund (IMF) is preventing other countries in the Global South from accessing green technologies and switching their economies. Seemingly nationalistic calls to “green” the British economy whilst countries in the Global South face increasing levels of ecological degradation and natural disaster evidence the depriotisation by powerful international economies and corporations of the lives and livelihoods and communities of colour.

Extinction Rebellion has successfully mobilised significant numbers of people of all ages around climate change, many of whom are engaging with climate justice activism for the first time. However, without careful consideration, such a mobilisation risks trampling over the careful labour of organisers of colour to shape a movement which has, in the UK, historically silenced the voices and experiences of our communities. Extinction Rebellion organisers would do well to listen to, and take action on the concerns being raised about their approach and tactics. The struggle to rectify damage done to our environment must necessarily be steered by the expertise and counsel of communities who experience the sharp edge of ecological violence. Climate justice will be secured for all of us, or none at all.

gal-dem has reached out for Extinction Rebellion for comment.