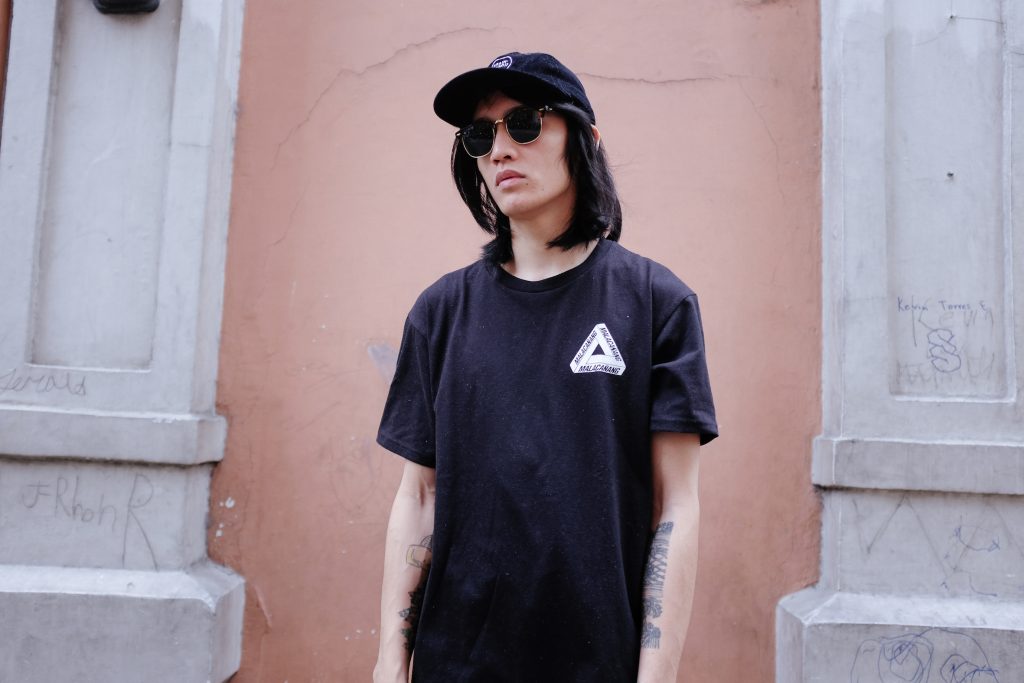 In the Philippines, karaoke culture is enormous. Every other night someone in the near distance strains through a road trip classic, emphasising words misheard, permeating any attempts to sleep. I avoid it every time I visit family members, after an ill-fated attempt at ‘Don’t Speak’ taught me my place in life: away from a microphone. It’s the last thing I speak to Eyedress about (phonetic spelling of real name Idris) when we meet before his show in London.

“’This Night has Opened My Eyes’, by The Smiths.” Off the top of his head, a song that tells the story of class divides, young parenthood and squashed expectations. “Pretty emo, really,” he adds. Idris Vicuña is a rare find, like women who go alone to swingers parties or like fresh air on a commuter train. A musician who lives in Manila, he’s unlike the racially ambiguous pop stars people call on when naming Filipinos who aren’t Manny Pacquaio. A “fully Philly”, to quote someone who once described themselves to me at a fireworks display. You’ve got Nicole Scherzinger and Bruno Mars, Mutya Buena if we’re going that far back, though all of them are ‘expats’. It’s rare to find someone who still calls Manila their home, and I’m curious as to how someone from a country with a ballad based music industry ended up in Dalston.

“’I was uncertain of everything,’ he recalls of the time when he lived in England, making music but with ‘no homies, nobody to call. I kept asking, am I going to make it? Am I going to survive here for a year?’”

The internet created Eyedress. It developed his influences after a childhood spent living in the States, bringing his music to the download folders of European tastemakers, and eventually over to London, during a stint where he lived under the wing of XL Recordings – home of Ibeyi and Adele. “I was uncertain of everything,” he recalls of the time when he lived in England, making music but with “no homies, nobody to call. I kept asking, am I going to make it? Am I going to survive here for a year?” Lonely in London, a city that sometimes doesn’t offer to belong on a plate, he thought the foxes might eat him when he took out the bins at one point.

The experience matured him, though in the end, it resulted in him being dropped by XL. Eyedress found himself alone again, though this time back living in Manila with disappointed parents. “They’d been telling people their son had been signed to the same label as blah blah blah. They were putting me on blast on Facebook. Then I got dropped.” We wince together at the thought.

“Anyone spotted having too much of a good time is dismissed as a drug user, something that can lead to much wider trouble if taken into the wrong hands”

Undeterred, he still makes music in a city that historically hasn’t had much space for left-field creativity. “I think people [are] generally shy, they don’t want to be judged,” he theorises. Anyone spotted having too much of a good time is dismissed as a drug user, something that can lead to much wider trouble if taken into the wrong hands. “If you have drugs and you’re poor, and you’ve got nobody who can pay them off, they’ll probably just kill you. Even if you’re rich they’ll kill you. One of my friends’ cousins got jumped. She got murdered and they dumped her in front of her village.” Murdered and dumped. Eyedress sighs. It must get tiring being made to remember the horror outside his walls, let alone live surrounded by it. But he is stoical, as I’ve learned many Filipinos to be about matters they cannot control. Cartel-esque political parties have run the Philippines for decades, and Eyedress knows nothing will change soon.

He navigates the heat and the traffic of the city for his daughter, who is now walking and is his primary concern. “All I think about is ways to support her…I’d like to feel competent, to feel like I’m contributing.” And so, he does, in the same way that hundreds of thousands of his peers do: by working hard to get himself abroad. It’s paying off though, as very recently the focus came to Manila with the Philippines’ very first Boiler Room.

Eyedress remembers the night as “a big crazy party,” where typical uncontrolled chaos reigned and worlds apart musicians shared a stage. “It was a meeting of the classes; these guys Owfuck [Manila rap group] are really from the cut and they were playing next to artists who are pretty rich. It was dope.” A stepping-stone towards better things for Manila’s music scene maybe? Maybe not. Eyedress is not complacent, remaining ever grateful but never expectant of better things. You can take the boy out of the Catholic Church but you can’t take the church out of this one.

The chorus of The Smiths’ ‘This Night Has Opened My Eyes’ opens with “Oh save your life/ Because you’ve only got one”. Eyedress no doubt chose the song because it plays in his mind. I imagine the words cutting through a humid Manila night, stealing someone a few hours of sleep, the poignancy lost to nobody.