Fairview has been described by some British critics as the most divisive play of the decade, but for black Brits, it raises questions we do need answers to. 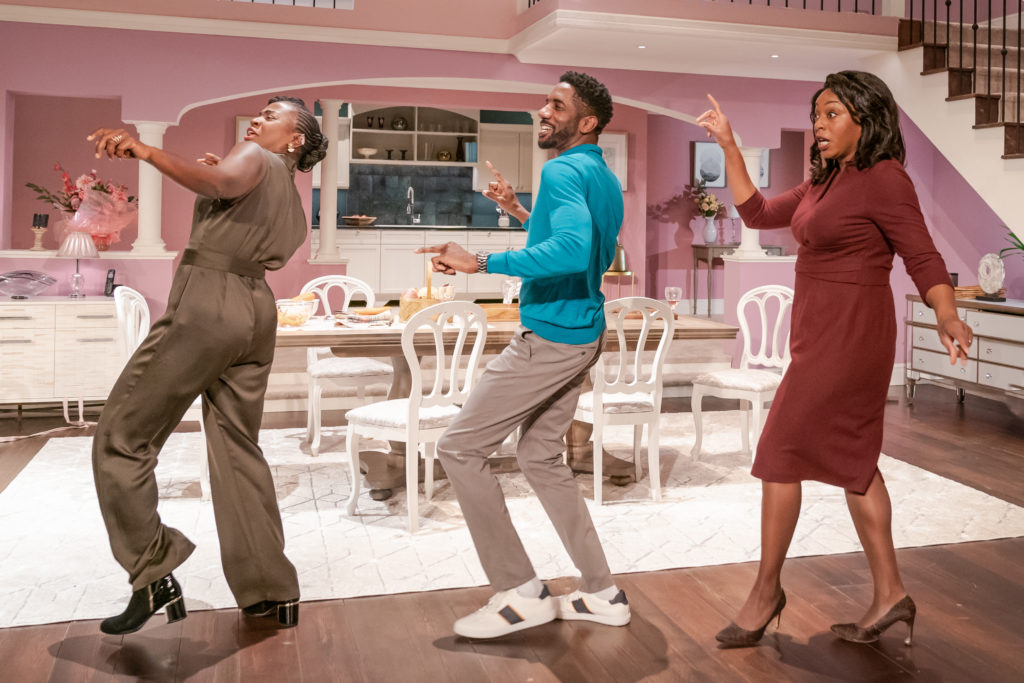 “What are you looking at?” is the opening line of Jackie Sibbles Druys’ Pulitzer winning play, Fairview. It is spoken by a character, Beverly, as a rebuttal to her husband, who she catches watching her as she fawns over her own reflection. Like everyone else, I had come to Fairview expecting to watch a show in the relative anonymity of a dark theatre seat. Yet as the play unravelled, this initial question of “looking”, rapidly turned into an active enquiry of the audience’s perceptions of blackness and black performativity. Under the direction of the London based director Nadia Latif, Fairview is about to finish its sold-out run at London’s Young Vic theatre. It is here that I watched the play twice, and, after speaking on separate occasions to Nadia and Jackie, discovered the different nuances this distinctly American play drew out within a black British context.

Described by some British critics as the most divisive play of the decade, Fairview is difficult to explain without giving away spoilers. It is a grinding kaleidoscope of perception: the first act is a sitcom setup of a black American family acting out familiar stereotypes. The twist comes in the second act, which repeats the actions of the first. Everything is the same, they mouth the lines but are silenced by the dialogue of unseen voyeurs saying casually racist remarks or sentiments of pity for African Americas. One says they’d like to be black because they can dance with their hips and shoulders, another refutes this because she knows it’s hard being black having watched how people treated her black nanny. In the final act, the black family sitcom is disrupted by the invasion of these white characters dressed up as members of the family and acting out black stereotypes. The lens is eventually flipped and the audience unwittingly becomes the spectacle of the play.

Jackie, who is a black American playwright, is hyper-aware that the majority of her audience will generally be white middle class “art types”. Fairview acknowledges this reality by asking them to reflect on why they are there, and how far they will actually go to make space for black people. It is a plucky and highly necessary move to stage a play which deconstructs white liberalism when politics in the US and the UK are sweeping into right-wing aggressions. When we meet during Fairview’s opening week in London, the Democrats are frothing over their potential impeachment of white nationalism’s agent provocateur Donald Trump. We are also a week away from the general election; the atmosphere in the UK is one dirtied by the mudslinging of identity politics.

Jackie reveals that during previews in New York, two black women got into a heated debate over the approach of the play during the final act’s monologue. One woman felt that in a Trumpian era, black people needed to stand with their white allies and that the play was too divisive. The other woman felt the play wouldn’t translate into any change of perception or meaningful action by the white audience members in the real world. “Both were having intense emotional experiences,” Jackie remarks, “and both are true.” In her mind plays are vital because they are about politics and perceived identity. “I feel like theatre is really good at being lowtech in a lot of ways, you have a person and they are body, face and they just do stuff,” she says. “So whenever you are talking about your body and it is specific to that, theatre is a really good space for it”.

The eloquence of Fairview, for both white and black audience members, is its exploration into the individual’s notions of blackness. “So often the conversation is about decentering whiteness and it seems that some white liberal people just want to be told the right thing to do or the right thing to say, and that’s how to get through it,” Jackie says. The 37-year old playwright is statuesque in appearance and softly spoken in a way that rounds up each punchy sentence. She speaks with consideration and empathy. “I wanted to dredge up all of the problems and to look at urban liberal racism because it’s insidious, but people don’t think they have a problem because they aren’t Klan members,” she continues, “but cities like New York are still so segregated, where people still say ignorant shit all of the time”.

For Nadia Latif, Fairview’s London director and the associate director of the Young Vic, a key issue is that white people always want to see themselves in every story. “I like to see myself included, but I am also able to enjoy things where I am not included, otherwise most of Western art would be inaccessible to me,” Nadia says. “I feel like as a non-white person you’re not extended that courtesy.”

Nadia highlights how the white gaze can destroy black narratives with the example of the recent Academy Award-winning film Greenbook. “It has such a great storyline. It’s about a queer, black classically trained pianist who does a tour of the south,” she says. “It could have been such a universal storyline of a queer man not being able to be what he wants to be, but because people need to seem themselves it ended up being smothered by white supremacy, and how it is more about this white man that drives him around”. In thrusting the disruptive white characters into the play, Fairview pulls up on the privileges of whiteness centring stories around itself. “People find damaged white men endlessly interesting, don’t they?” Nadia says, wryly, “But they don’t find smaller ambivalent things interesting about black and brown people, they find it strange”.

So what are you looking at? This initial question expands into a question of what even constitutes black art. Can blackness ever be truly explored unrelated to its relationship with whiteness, and should it be? “It is complicated because you have got to stick truth to power, take down the ideas, institutions and the basic supremacy power that sits underneath everything,” Nadia says. “But capitalism is an extension of white supremacy, so even buying a ticket to go and see an amazing piece of work, you are already part of the system; those are the things you have to think about every day”.