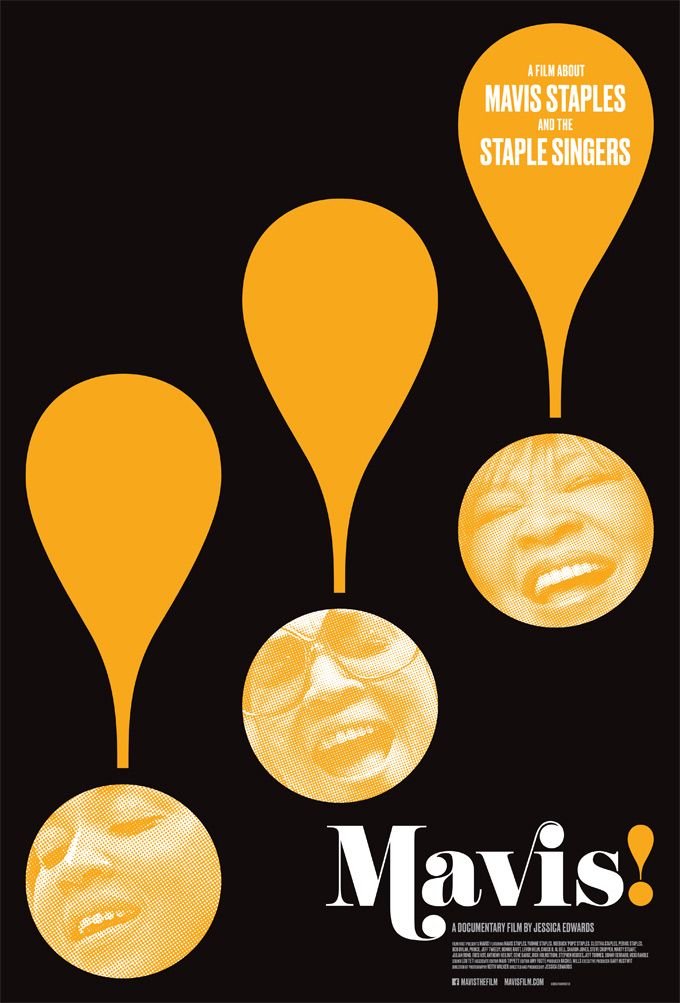 Mavis! is the 2015 documentary by director Jessica Edwards, which tells the story of legendary singer Mavis Staples. It charts her rise from being the child star of her family gospel group, The Staple Singers, to her successful solo career as an adult.

You may not know her name but you’ve probably heard her voice in songs such as “Respect Yourself”, “Let’s Do it Again” and, perhaps most famously, “I’ll Take You There”, which appears frequently in film and TV soundtracks and has been heavily sampled by artists such as Salt N Pepa in Let’s Talk About Sex and Dizzee Rascal in Dirtee Disco.

The sound of the Staples Singers started off as gospel with a blues inflection from Mavis’ other worldly voice and Roebuck “Pops” Staples guitar playing, but evolved with the changing world around them to incorporate folk, soul and rock music. Pops, who led The Staples Singers, comes across in the film as a gentle giant: a self-educated guitarist with incredible drive and vision for the future of his four daughters and son. But Mavis was the undeniable star of the group. With her deep and distinctive voice she confesses people thought it more likely to be from “a grown man or a fat woman” than the teenager she was when they released their first hit single, An Uncloudy Day.

Not only talented musicians and singers, The Staples Singers campaigned for the civil rights movement of the 1960s and were friends of Martin Luther King, often accompanying him on his campaign trails, singing what they described as “freedom songs”. Julian Bond, a civil rights activist and founder of the Student Nonviolent Coordinating Committee describes their music as “the soundtrack of the civil rights movement”.

It’s inspiring that at a time when “almost none of the other groups or quartets” were singing about racial injustice, The Staple Singers had the courage to do so. It’s something that resonates a lot with me today, especially with the rise of the Black Lives Matter movement. We have come so far but there’s still work to be done and Mavis is still singing about it. In the film, there’s a great clip of her performing the 2008 song “Freedom Highway”: “There’s one thing I can’t understand my friend/ Why some folk think freedom/ Was not designed for all men”.

This documentary is an uplifting celebration of the life and work of a fantastic singer. I’ll tell anyone who’ll listen that I love music, but I’ll admit that I didn’t know much about Mavis Staples other than her name. After watching Mavis! I found her determination to succeed, her warmth, and her positivity really inspiring.

In adulthood, when Mavis tried to pursue a solo career but couldn’t get a record deal, she paid to make her own album. She describes how she was “just about to start selling records out of the trunk of my car” when Prince signed her to his record label. Mavis simply wouldn’t give up on herself, and I think that’s an important message. It’s certainly one that I’m going to try and live by.

The film reveals that Bob Dylan fell in love with the young Mavis and proposed to her more than once. Their romance was short-lived but they remained friends. She didn’t accept his proposals, though I think it a shame that Edwards doesn’t ask her why. It may have been her single-minded focus on her career or societal pressure against marrying a white man but as the film doesn’t dwell on it, we’ll never actually know.

Musically, she refused to be pigeon-holed. The majority of the gospel music fanbase, in the 50s and 60s, were churchgoers and swapping over to secular pop or soul music would risk alienating them. It just wasn’t the done thing. But with The Staples Singers and later as a solo artist, she was unashamed about her widespread musical interests from pop to folk, soul and rock as well her aspirations to break into the mainstream music industry. She influenced artists from genres such as country, folk and hip-hop; from Bob Dylan to Prince to Chuck D of Public Enemy. There are so many testimonies to her appeal. In fact, Chuck D proudly states that “the Staple Singers were part of my family’s soundtrack”.

I watched Mavis! with my mum, who had a deeply religious upbringing and has grown up with all of this music. She cried. To be honest, I almost did too. I was surprised at how emotional this film was and how much it resonated with me as a young black woman. Mavis Staples, now nearly 77, is a titan of the music industry and has lived through most of the major political events for African Americans in the last century. She’s incredibly talented and her music spans genres, even at a time when that just wasn’t acceptable.

I think Mavis Staple’s voice has lost some of the sweetness and clarity that it had years ago; it now sounds deeper and more gravelly. I preferred the sound of her youth, but hey, people get older and she’s still better than most singers can ever hope to be. This film has been the best kind of education in that it’s actually interesting. It has an important message for women of colour that if you have a voice and you have something to say, then you should let it be heard. Mavis is matter of fact: “I’ll stop singing when I have nothing left to say.” There doesn’t seem to be any chance of that happening.