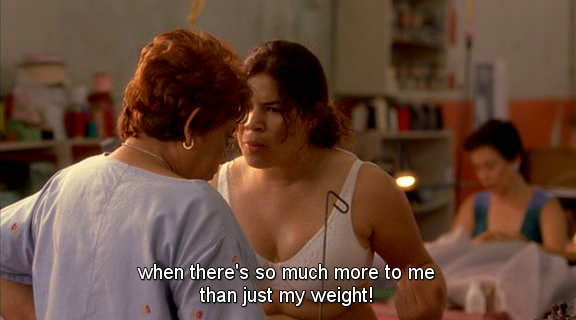 I was initially unsure of what film to choose for gal-dem’s film club. High culture or low culture? A happy film or sad film? Getting to write about films about or by women of colour is a great gift to have been given.  While I may complain constantly about the lack of representation for us non-white gals in the film industry, let’s face it, there are some gems out there, and sorting through them all is a tough job. But a bout of extremely low self-esteem (related, as it so often is, to my weight) presented the answer to me very clearly.

I’ve battled with my weight, and more importantly, battled with battling my weight, for as long as I can remember.  The first time I remember being self-conscious of my weight and my fatness is when I was 11, coincidentally the first time I saw Real Women Have Curves. I was in my first year of secondary school, cursed with a great deal of puppy fat and an extremely unfortunate haircut my dad had given me (don’t let your white father cut your mixed hair, girls).

I only really watched the film because a) my friend had lent it to me and b) I loved America Ferrera and Ugly Betty. So many of the important themes of the film – generational differences, problems facing women of colour, applying to college, romance – went completely unnoticed to me. I don’t think I even got what it was trying to say about fatness, but I enjoyed the film nevertheless. I went back to school and didn’t really think about my own fatness, until people started complimenting me on having “grown out” of my puppy fat. Unfortunately for them, it all grew back as what I guess can only be described as “dog fat” – not the most elegant of terms. I’m still an adult and despite having allegedly lost a great deal of weight recently, I’m still fat.

I have fought very hard in the past few years against my weight-based self-hatred, and I’ve now reached a place where I’m generally happy with the way I look. It’s only when I’m on a desperate mission to buy skinny jeans and can’t find ANY in my size despite the shop having at least 50 pairs in a size six that I start doubting myself and my body. So Real Women Have Curves came to me at the perfect point in my life, just as I was considering venturing back into my old miserable ways.

Ignoring its problematic title, this film is such a blessing: a rare film that’s pro-women of colour, pro-fatness, and as an even greater coup, made by a female director. It follows Ferrera’s Ana, a woman from a Mexican immigrant background, over a summer as she works in her sister’s dress factory, dealing with abuse from her mother and aspiring to go to college.

Her mother is the main antagonist in this film, calling her ‘fatty’ as a nickname and a ‘whore’ when she finds out Ana has had sex, yet she’s never a two dimensional bad guy. In a scene where Ana leaves to go to college, her mother locks herself in her room and stares wordlessly at a photo of Ana, simultaneously provoking frustration and sympathy from the audience. It’s a largely female film – the scenes at Ana’s sister’s factory featuring a plethora of women of shapes and sizes are particularly delightful – where the men are given little to do. Ana is given support in the form of a kindly teacher, sympathetic grandfather and an endearing white love interest, but you get the sense that she’d be perfectly fine without any of them in her life.

Ana’s family struggles are moving and very important to watch – I’m not from a Latino background so I can’t comment on how accurate a depiction these scenes are – but for me, it’s Real Women’s depictions of fatness that make it brilliant. There are so many scenes of pro-fatness, from Ana demanding that her boyfriend turn the lights on before they have sex so that he can see her naked, to her sister making her a dress because fat women deserve to have pretty dresses too.

The scene that lingers in my mind the most however, is a scene set during a swelteringly hot day in the factory. The simple idea that Ana has to undress in order to cool down sets off a chain of events that leads the women (other than Ana’s horrified mother) to strip off and compare stretch marks. As they catch their breath, delirious, sweaty and happy, the fattest of all of them exclaims: “ladies, look how beautiful we all are!”. I’m a sucker for crying at scenes that aren’t sad (just like the time I almost cried in Magic Mike XXL) and this scene quite naturally got me going.

I’m furious with myself that it took me ten years to rewatch this beautiful pro-fat film, but I know that it won’t be the last time I watch it again. While it may occasionally veer into soap opera territory, Real Women Have Curves still manages to be a moving and nuanced coming of age film that I wish more fat, non-white women (my younger self included) would watch and take comfort in.