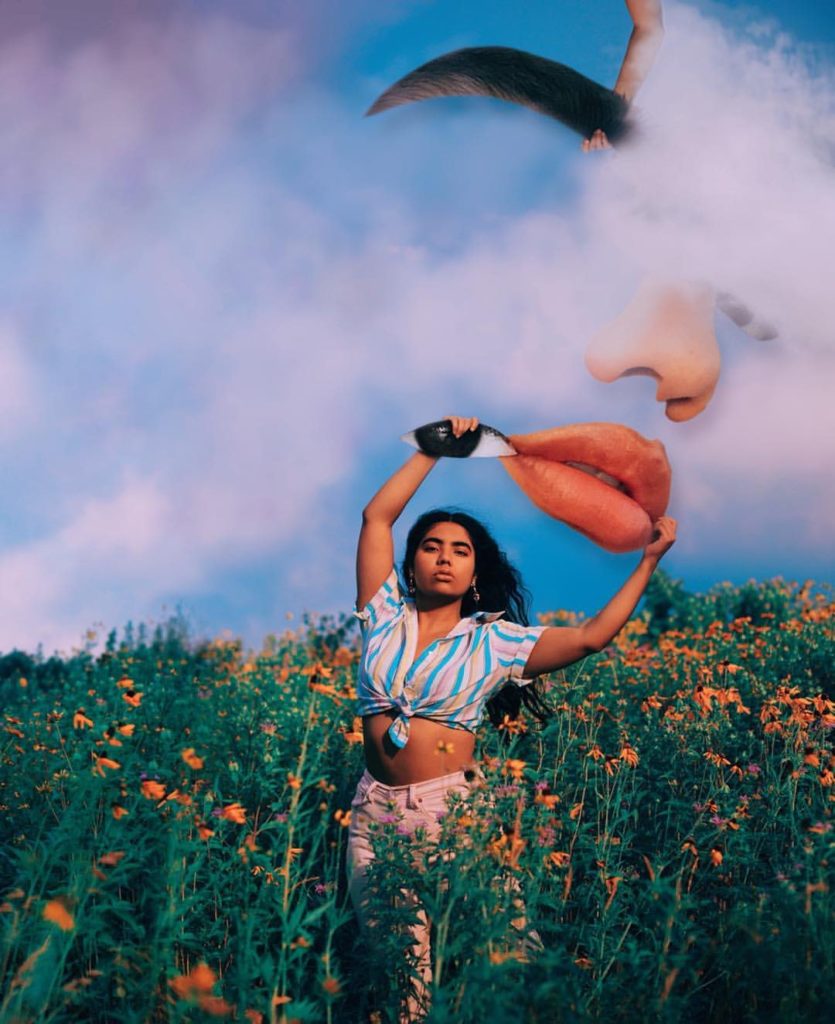 The Chicago-based Guatemalan photographer distorts the world around her emptying the trash from her head.

When you’re looking at a Glenda Lissette image it’s a window into a technicolour dream world, one where you can expect the unexpected. Using ethereal backdrops, she puts so much of herself in her work (except when her presence is only recognised through floating body parts) acting out fantastical scenarios and quirky characters. More accurately each self-portrait is what the 25-year-old Chicago-based photographer sees when she closes her eyes.

“It just kind of pops into my brain, I visualise myself as a character and then I get obsessed with it,” she explains over the phone. “I would say it’s kind of a curse, an impulse. Even if it’s the middle of the night. I’ll have to get up. It controls my life.” She has an eclectic mix of characters at her disposal. There’s her favourite – Gamer Girl – who is inspired by her infiltration into the gamer bro world where she found girls in the subculture were looked down upon. Another is her OOTD invisible alter-ego where she makes herself an invisible sandwich board for her outfits, a comment on influencer culture. “I wouldn’t call myself an influencer. I’ve gotten sponsorships and I go to events but people will literally call me an influencer but that’s kind of gross,” she adds.

A lot of the characters are vehicles to imitate archetypes in humorous ways. Like the super airbrushed skinny rich girl, seen in photos doing leisurely activities like skiing. “I’ve never done any kind of snow sports, I can’t imagine going on vacation and being in the snow. But that’s something that rich white people do a lot. I saw these billboard ads for these snow bunny girls and I just thought: ‘I want to be that’. I bought the set that I saw.”

Women of colour are rarely given the space to self define and unpick the world around us through our own lens, especially in the art world where gatekeepers get to decide what work we should make to gain access to institutions. So often that means we subconsciously start to create through the lens of their narrow view of what we’re supposed to be. “There’s pressure to reproduce stereotypical imagery,” she says. “During the lockdown, I’ve been trying to play with these tropes in my ‘plant mommy’ series. This pressure to be a woman that has a lot of wisdom is beautiful, erotic, confident and spicy.”

As a Guatemalan immigrant, she also feels institutions are far more interested in her reproducing her pain than listening to her opinions. She was recently a part of a showcase of art from the diaspora of Central America, where most pieces picked by curators focused on immigration and there was little press appetite for any other narratives. “There are ways to express your identity without feeling so detached from it,” she explains. “Instead of trying to tell people what my identity is, I just want to express my own ideas. A lot of times we’re not allowed to make work that’s not just so clearly about poverty, drugs or violence and I really want people to understand that these things are just inherently in our lives and you don’t have to sell that to other people.”

However, she makes it clear she thinks there’s a place for that work. Her own journey is peppered with hardship. By her own admission she “grew up really poor” and “had a messed up life”. One of her parents was a political refugee and the other had to cross the desert to start their new life in the United States. “Any reflection of my experience is a reflection of my parents and my ancestors. You don’t have to prove your otherness, no matter what you’re saying it’s all embedded and it’s all valid.”

“I visualise myself as a character and then I get obsessed with it. I would say it’s kind of a curse, an impulse. Even if it’s the middle of the night. I’ll have to get up. It controls my life”

Her history of moving around, sometimes alone, is what originally turned her into a self-portrait artist. “When I was right at the beginning of high school, around 14, I moved to the United States from Guatemala. That was like a really big, huge change for me in my life. It was like the first year I didn’t live with my parents.” Finding herself alone more often, her new guardian was taking a black and white film class which exposed her to visual mediums. “I was like: ‘Okay, this is something I really want to get into in the future’, like once I can afford to buy myself a camera. The following year I moved to Chicago with my mom and I was in this new town with no friends and kept begging my mom for a camera, so for my 15th birthday she got me one.”

After that, she spent most of her time outside taking photos, editing them on a bootlegged version of photoshop her mother got free from college. “Almost immediately I just started taking photos of myself, because I literally had no friends. I started challenging myself like, ‘okay like let me make myself look like a creepy character today’, giving myself prompts and teaching myself how to edit these little worlds. From there on I just haven’t stopped,” she continues. “It came from loneliness but at this point, it’s a choice.”

As she grew up she drew inspiration from artists like Ana Mendieta. “She’s the one that inspires me the most because she was Cuban and she moved to the American Midwest,” Glenda explains. “She felt this disconnect from her homeland. So she created a lot of work about her connection to the land. As someone who’s literally moved like 20 times before I was 18, I really connected with that. I never really felt like I had a home, a community or a space that was mine. I always felt like Mother Earth was home for me and no matter where I went photography has always helped me to explore the space around me and find familiarity.”

In a world where we’ve become so used to seeing manipulated images to the point where they barely even register as fake, Glenda’s work dials this up to the maximum. “I see Photoshop in the same way I see painting. I use it to sculpt and add things and I don’t like to limit myself to just photography standards of what a portrait should be and use it to sculpt the entire image,” she says. Using the editing software she layers her photos with lots of coded references, her favourite pop culture treasures, memories. And, for Coachella girl with her culturally appropriative festival glam, there are palm trees dotted in the background despite the fact that it was actually taken in the bitter Chicago winter. “It was literally negative 30 degrees here with snow on the ground, but I was rubbing glitter all over my boobs,” she laughs.

But with great manipulation comes great responsibility, something the fashion world and media have reconciled with since the advent of high tech airbrushing. So often women grace the covers of magazines and behind the scenes, editors choose which bits of them to nip and tuck in order to sell issues. We know Jameela Jamil loves to call out this practice. By using herself as the model, Glenda manages to avoid “exploitation” that she’s seen elsewhere. “I know that I can push myself and I’m not putting anyone else in any harm. It can be very taxing emotionally sometimes when I modify my own body because I’m doing things that I don’t like and I don’t want to necessarily see. But I can’t imagine doing that to someone else, like that would just be horrible,” she continues.

Focusing on all the areas of yourself that could be minimised is unhealthy but in some ways creating the images and laying bear the way we torture ourselves helps Glenda process her feelings. “It’s not necessarily a statement for others but more so a reflection of the trash that I have in my head, the expectations that I put on myself. Sometimes I make fun of myself and show myself the versions of me that maybe I wanted to be and stretch that out to create something absurd.” You can see this in the dramatic Barbie doll-like proportions in a shot of Lissie, “my alter ego that comes out glowing when I remove the hair off my asshole”.

Replicating and distorting these images compulsively means Glenda has created a portfolio of daydreams. Her portraits are mythmaking: creating an alternate world where she gives in to the unhealthy body expectations we’re taught to hold, the archetypes of womanhood we should be, the unattainable Instagram lifestyles we sometimes covet, or the imaginary activities we might do if she were elsewhere. With each bold and saturated image, she’s creating her own visual language to unpick the myriad of thoughts she has about herself and other women she sees.

See more of her work below.

Me, Myself and I is a week-long celebration of self-portrait photography focusing on the power of creating art alone.

How to shoot your own thirst traps