‘Have you noticed white people never move out of your way?’ The politics of the pavement

I’ve been making a conscious decision not to move out of the way for white people for a year now – and a hierarchy has become clear. 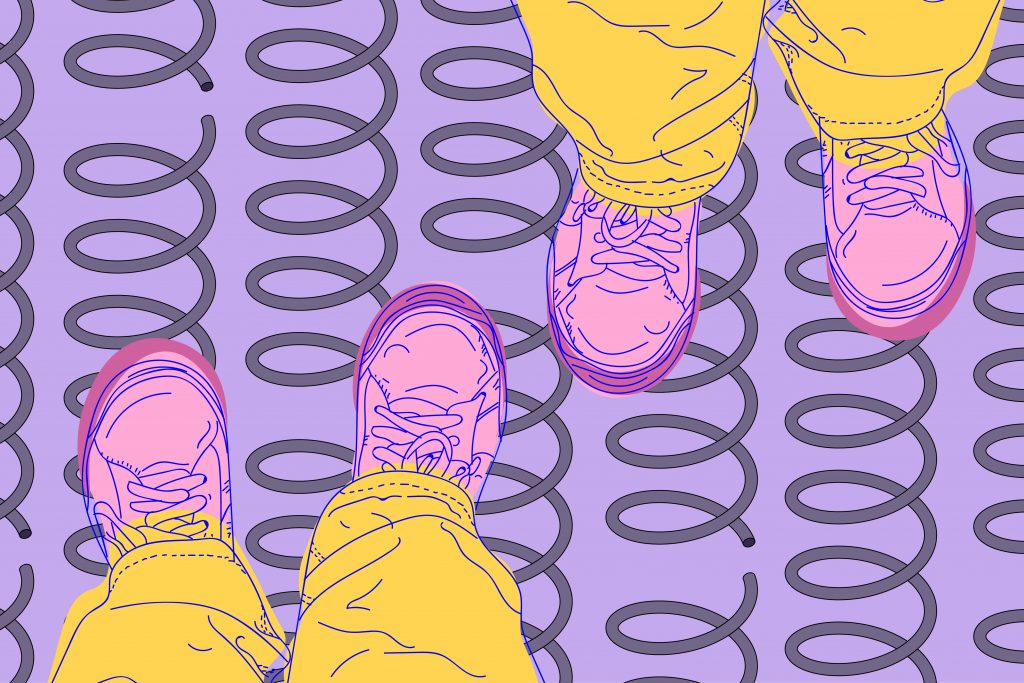 Living in a city with 8.8 million other people certainly has its downsides. You notice them as you squeeze onto the already full carriage. It’s a silent game we play together as we weave through crowded stations and dart across busy streets – tutting at tourists who don’t know the rules. Then one day my sister came home with a straightforward question “have you ever noticed that white people never move out of your way on the street?” She was inspired by a challenge that was popular on social media at the time, and she was angry. I realised then that there were unspoken rules that we all acted on, beyond standing on the right and walking on the left.

A year ago, writer Hannah Drake issued the “hold your space” challenge, after noticing how people of colour, particularly black women, “navigate throughout spaces making accommodations for white people.” Dozens of women seemed to relate, sharing tips and experiences of the challenge online. Hannah argued that this policing of black bodies stems from Jim Crow laws that “provided racial etiquette for black bodies”.

For the last year I’ve been ‘holding my space’ on the pavement. I’ve been barged into, scowled at and everything in between, for simply deciding not to move out of the way. I used to think that stepping off a narrow pavement to let a group pass was just the polite thing to do, until I realised not everybody would do it. Some people walk with the belief that even the Earth should reposition itself to suit their chosen path. Here I am in the UK, millions of miles removed from the American South. But to me, the hierarchy is still obvious.

“I’ve been barged into and scowled at and everything in between, for simply deciding not to move out of the way”

09:15 15/07/19, Piccadilly line Westbound – it’s by no means a busy train, but the (white) woman next to me is desperate to have her suitcase to my right, by her seat. She knees me once (a mistake). Once again (surely it’s not intentional). A third time (any second now she’ll settle). Strike four. There shouldn’t be a fourth strike but I’m too tired this morning.

But wait – surely this couldn’t happen here? London is constantly framed as a “progressive” city: at least enough to know that racism still exists in the world. And the history of racism in the UK is nowhere near that of the Jim Crow South – at least that’s what the standard curriculum would have you believe. If you consult my old history textbooks you’ll see that Queen Victoria’s reign was the only significant social and cultural moment between Elizabeth I and the First World War. It is this complete denial of Britain’s violent colonial past that allows the majority to ignore the extant racial hierarchy at its core. In his essay ‘Traveling White’, writer Chinua Achebe recounts an experience of sitting in the white section of a “Jim Crow bus in Her Majesty’s Colony of Rhodesia”, which was seen by fellow passengers as rebellion against the status quo. This too is British history.

What is evident from my personal experience is that these negotiations of space are not only informed by race, but also gender, disability and class. I’m speaking as a black African immigrant woman, whose experience differs greatly from even a black man. In his song ‘But You’, Dev Hynes laments over his treatment as a black man in public spaces. He worries about being seen as a threat, even though he knows that he’s “better than they thought”. Being given more space is not always a win. In this case, the same fear that causes someone to cross the road to avoid you, leads to over-policing of black men’s existence in public, and racist Stop and Search policies.

08:36 19/02/19 Great Northern train to Moorgate – a (white) woman just hit me with her bag. She was rushing off the train, I am sitting in an aisle seat. She did not have time to apologise. She did have time to politely ask another (white) woman to excuse her so she could exit the train.

It is not that I haven’t had many experiences with men in public not respecting my right to space (even things like standing too close at concerts). But the negative interactions with women have struck me the most. I realised that the same women crying “chivalry is dead” in girl power crop tops would trample me if I dared not move out of their way. Sojourner Truth asked “ain’t I a woman?” back in 1851 and even now as I enjoy many freedoms she fought for, the sentiment still feels the same. Blackness and femininity are constructs that were never intended to fit together. The move from “you don’t need that seat, you can handle it” to “you don’t need that pain medication, you’re strong enough to bear it” is a step not a leap.

01:32 09/12/17 (pre-challenge) Libertine – I’m tired and already do not want to be here for the second night this week. I also do not want to miss out. The promoter (a black man) asks me to stand up so that another girl can sit down. I’m currently sat with two of my friends. Why didn’t he ask one of them? (I know why he didn’t ask them) Why did he ask me? (I know why he asked me)

No, I don’t go to that club anymore, and I now know all these clubs are racist. But no matter the space, doing this challenge and writing this reflection did not make me feel good. I felt like an obstacle, undeserving of space in the most basic sense, and invisible, all at the same time. Who knew when people said they “don’t see colour” they meant they didn’t see us at all? And to the skeptics and apologists, yes I did consider that it was just me, and how I was raised to interact with the world. But I don’t understand what would invite others to push me, barge into me and ask me to move.

09:20 01/08/19 Piccadilly Line, Westbound – I offer my seat to a (black) woman on the train, as I am only one seat down from her young daughter. She politely declines, and I am relieved that I don’t have to stand (I’m not feeling my best today). The seat between me and her daughter soon becomes available and she takes it. I continue reading my book. As the woman leaves the train she says to me “you make sure you have a good day” with such rare sincerity. I don’t feel invisible.