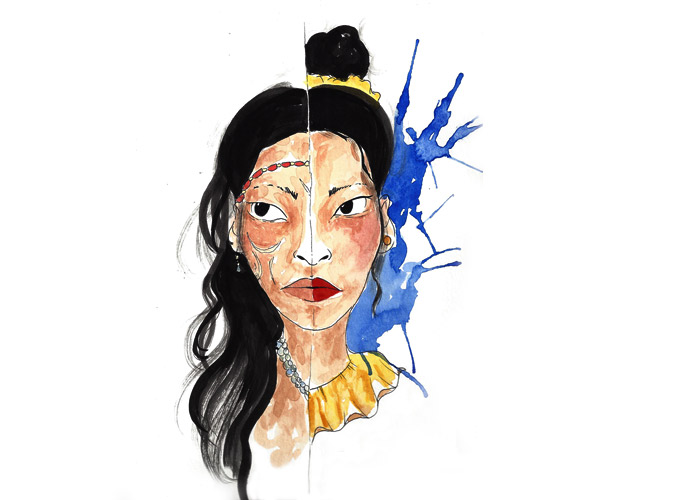 When people of colour talk about community, they do so with an identifiable connection to their heritage, a shared story, and increasing civic representation. There is no indigenous American culture in Britain today; of course, the population of those who identify as such is extremely low, which means that outside of a family connection the community is almost non-existent.

Politics is full of rhetoric concerning immigration, fears about people who are different, and bans to keep people out. It is easy to fall into a trap of saying that some very small ethnic communities have been cleansed internally by white British culture. I do not think that this is the case with mine. My mixed race is, for the forms, “Other.” I carry with me a lost pride; I am an indigenous South American, but I know almost nothing about my story.

My indigenous heritage is a mixture of Kalinago from Trinidad and Arawak (pronounced air-a-wack) from Venezuela. The Kalinago, or Carib, tribe mostly come from the Lesser Antilles countries but speak some form of the Arawak language. The Arawaks (sometimes known as the Lokono, meaning “the people”) came to the northern coast of South America from the Orinoco river region in the Amazon rainforest. According to Survival International, a charity that works to protect indigenous peoples’ rights, there are around 400 tribes in the Amazon alone.

“It is incredibly lonely having a rich cultural mix, but being unable to explain the progression of the story”

My father doesn’t think there is a racial profile category that reflects his mixed heritage either. “It feels like there should be a connection but there isn’t,” he says. “If I think about my other (white) heritage in my family there is a clearly traceable connection.” It is incredibly lonely having a rich cultural mix, but being unable to explain the progression of the story. There is little information as to when, or more accordingly, why my ancestors moved from the mainland to Trinidad.

Any means of trying to foster some sort of education stops in our museums. There are indeed few pieces of Native American history exhibited, but almost nothing of the diverse South American tribes. It is almost completely inaccessible. “Anyone who, like me, wants to access the artefacts of their heritage is prevented from experiencing this basic human right (to know their story) and the remnants of colonial past suppress my ability to do that,” my father says.

How can those of us with indigenous heritage, however small a population we are, explore our stories in a more meaningful way than reading ten-year-old webpages?

“Food is such an important way of learning about other cultures, but even more so for trying to understand your own”

Arepas (erepas) are a doughy food pocket from Venezuela made out of corn, and eaten as a staple, like bread, across the country, amongst all socioeconomic backgrounds. This is one of the most famous Venezuelan food exports but is ultimately an indigenous dish. Food is such an important way of learning about other cultures, but even more so for trying to understand your own.

I cannot speak Spanish, which is often met with disappointment by the person asking where my name originates (my second name is usually mistaken for being Italian). Arawak is the largest family of languages across the Americas. There are a few words in the English language that are derived from Arawak words. Many etymology dictionaries give Spanish as the language that gave us words for a hurricane, canoe, hammock, barbeque, potato and tobacco. These languages are on the verge of extinction, a trend that indigenous communities all over the world are facing.

This can be incredibly lonely. Cultural assimilation works only to the extent that it expands a personal capacity to grow into a new culture, one that can offer a better standard of living, one that can help us to contribute to a new community, both by adopting new ways of viewing the world and by introducing old customs to new environments. But, there is a line which is crossed whereby those old customs are forgotten; that is what I feel has happened with mine.