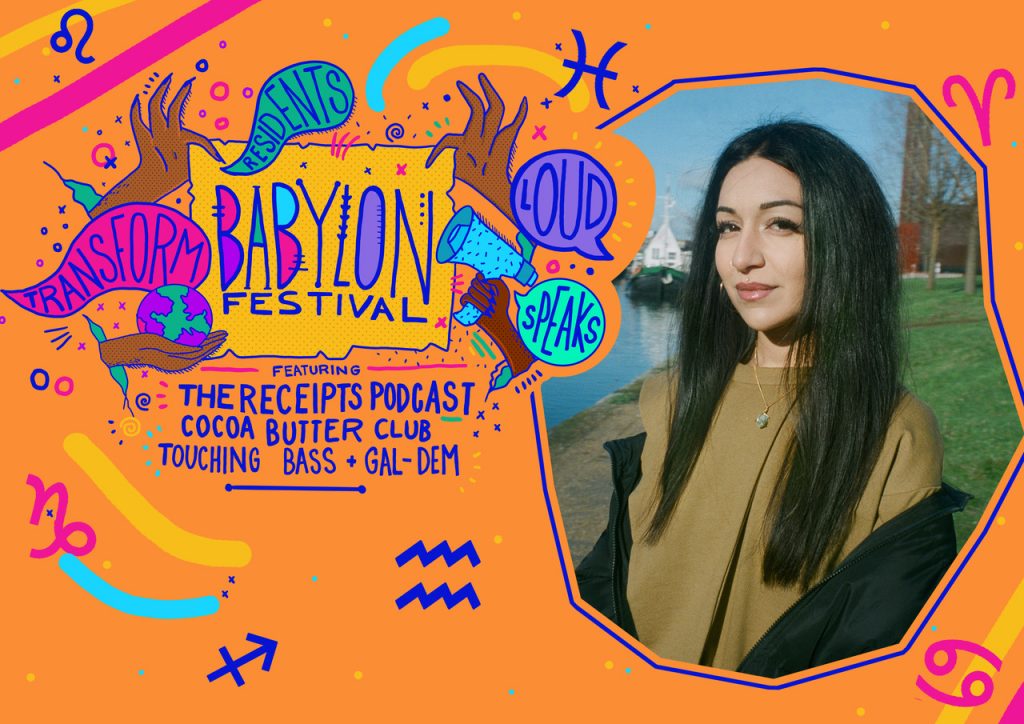 Astrology has surged in popularity recently, and it’s got everything to do with the state of global politics. From dating apps letting you filter through users by their star sign to zodiac themed club nights, it’s clear that people are looking for answers outside of the traditional systems in place that keep failing them. While it’s not uncommon to see a rise in alternative spiritualities during times of political unrest, astrology maintains a unique relationship to the experiences of qtipoc+ folx, who don’t always resonate with the teachings of more traditional religious institutions. We spoke to multi-disciplinary visual artist, DJ, performer, workshop facilitator and astrologer Marissa Malik ahead of gal-dem’s Reclaiming Astrology panel at Bush Theatre’s Babylon Festival.

At 24, Marissa is like a polymath and your grandmother’s hands and a teenager who has just bought a diamante-studded handbag from a mall and, wide-eyed, has a story to tell you about it. Knowing Marissa is like floating on a lilo on the Atlantic and looking at the sky for ages and not being scared. It’s like a free membership to an extremely high-quality app about diasporic spirituality, deconstructed club music, and skincare.

We catch up with Marissa in a tea shop in Soho ahead of the Reclaiming Astrology panel. We stop the interview a few minutes in because she seems distracted. “Yeah it’s just hard because this place is haunted”, she explains. “Maybe that’s why the staff are so aggy”. We move to a taco and cocktail bar a few doors down while she recalls the time she worked in a haunted Urban Outfitters (“that was tricky”). We order expensive drinks and try again.

gal-dem: Ok, so you were telling us how you got into astrology.

Marissa Malik: When I was 10 or 11 when I got a book called Knowing the Signs or something, because I wanted to know more about myself as a Pisces. There were a few people at my school who had the same birthday as me, but I felt that they were so different to me and I really struggled with that. So I started from a place of kind of criticising how that worked, because it felt really prescriptive. As I got older, I got more and more into it astrology fell more and more in love with it. I think I really began a serious journey into being an astrologer when I was in my early 20s because I dated three people in succession who had the same birthday; all Geminis. It really struck me as significant, and I thought: what is this?

What did your family have to say about it all?

Growing up, my dad’s mother lived with us and she was really low key about her witchcraft and mysticism, but I remember I would come home with an injury from a soccer game and my grandmother would say okay, come sit down I’ll do reiki on your leg. She would knit and sing Bible ballads. It wasn’t necessarily an overt teaching, but it was this very subtle and ancestral integration that “this is what we do”, it’s just something that we need. When I spoke to other people in the small, very white town I grew up in, I started to realise that some of the practices that were going on in my house were kind of strange. There was enough openness that I could explore those things and my parents weren’t going to get super mad at me. But past a certain level it was unacceptable because of my mum’s Catholic vibes.

I grew up in a home where gay people were vocally accepted. My family’s view was that gay people aren’t going to hell, and the notion of getting married as an obligation to God was never really put on me. Instead there was more emphasis on the immigrant notion of like, be financially stable and supporting yourself. But every Sunday without fail we’d go to church and I was really resistant. It felt really contrived to me and the church we went to was just full of white people and it was frustrating.

With astrology I kind of left the unnecessary ritual and the god-like figure who I didn’t feel connected to or didn’t have any inclination to appease, behind. Astrology gave me an avenue where there was no judgment on myself; it was just a kind of guidance and advice and acknowledgement of things to be aware of. Astrology gives you so much positive reinforcement.

“You can’t be gas-lit out of the fact that Venus was in Aries when you were born. It’s just what it is”

Is that why queer people love it so much?

Obviously it’s difficult to speak about a monolithic experience of why queer folx like astrology, but I think historically with the colonial decimation of what the West perceives and defines as queerness in ancestrally colonised people, there’s so much friction between institutions of governance and where queer people fit in. Often queer people in our ancestral communities were the spiritual leaders that everyone needed. Because of this, spirituality and a relationship to mysticism and other realms is so important to queer people, especially queer people of colour. Everyone in this life, I feel, wants to or needs to feel connected to spirit in some way, whether that’s in material things or in structured religion. I think astrology provides something, just something for queer people to have that’s about them in a non-judgmental way, in a way that is just kind of a fact, because whether you believe in astrology or not, you have a birth chart. You are a living snapshot of what the stars looked like when you were born. The fact of the matter is this planet was here when you were born and so much of how queer people, especially queer people of colour, are oppressed is by erasing and mythologising what we do or say and and kind of turning it into a subjectivity. You see that with corrective r*pe or people responding to people coming out by saying, “Oh, you’re having a phase”. You can’t be gas-lit out of the fact that Venus was in Aries when you were born. It’s just what it is.

Astrology itself is a construct though, right?

I guess you could say that, but astrology is a specific reading of astronomy, or what science calls astronomy, so even though you can say, “oh astrology is bullshit”, you can’t say that the planets don’t move in specific patterns. Astrology is an interpretation of astronomy that you can use to guide your life in a really beautiful way; on your own or with other people. It’s deeply personal, so it’s almost like astrology can be your guru, just without trying to steal your money.

Ha. How does astrology play a part in your day to day life?

Astrology influences me when I’m at the crests and troughs of different emotions. I think astrology has helped me become a more grateful person because when my life is going in a beautiful direction I think about which energy I need to thank for it and it helps me stay humble, remembering that there are outside factors contributing to what’s going on in my life.

Astrology helps me have consideration for others too. I feel like, especially in queer PoC radical circles, it’s so easy to be like, “fuck this person”, or “this person’s cancelled”. Astrology forces me to hold space for people’s fuck-ups. It’s not like I necessarily blame their wrongdoings on the stars, but I factor in that there could be external influences affecting their behaviour. Like when my Aquarius friend isn’t super honest with me I’m just like, “okay, this fixed sign is really going through it right now, and they might need to settle something in themselves before they can talk to me”.

“A lot of queer people of colour are really trying to explore ancestral healing and intergenerational trauma, and how we need to heal now in order to move forward”

Yeah, it seems reflection and communal maintenance of mental health is so much more present, accessible and mainstream now as an idea. How is astrology linked to that conversation?

I think astrology is very much a practice of care, and I think the way that queer people of colour have to create our own communities and really emphasise cultivating safety within those environments goes hand-in-hand with how astrology can work. Astrology can be used in many ways, but I think the way a lot of people use it, is through self-improvement and self-help and self-awareness and I think that all falls under the umbrella of healing.

Individual autonomy and individual healing benefits everyone and I think a lot of queer people of colour are really trying to explore ancestral healing and intergenerational trauma, how we need to heal now in order to move forward and create revolution that’s going to be effective and sustainable. Astrology is a way for people to access that in relation to spirit without the structures of organised religion. But I think the next step for that is finding platforms for more astrologers of colour to facilitate that healing.

You’ve been pretty clear that you don’t feel astrology is a religion but if it was, where would its place of worship be?

I think actually one of the beautiful things about astrology is that there isn’t one central hub that people have to like pay homage to. I think so much of organized religion promotes border state violence and the propagation of colonialism. The fact that you can do astrology from anywhere is so decolonial because it imbues the sacred back in wherever you are. Wherever you are is sacred and you carry that with you. You don’t have to go anywhere to find that.

So the panel on Saturday is called ‘Reclaiming Astrology’. Who or what are we reclaiming astrology from and what can we expect from the event?

I think we’re reclaiming astrology from the mainstream gaze of whiteness. I think of reclaiming astrology in the same way that we think about reclaiming feminism. A lot of people think of feminism as something that’s for and by white women, with liberation being very linked to whiteness like, you know, dying your already translucent armpit hair purple and believing in the gender binary. Similarly, so many astrologers that we see in mainstream media are white, which taints astrology with this notion of white occult practices or like, or Western witchcraft period. I think on this panel, we’re trying to reclaim astrology from those confines.

Reclaiming Astrology: contemporary mysticism and its relationship to qtipoc+ communities is at the Bush Theatre as part of Babylon Festival at 5pm on Saturday 9th February 2019. Tickets are priced at £10.

This interview has been edited and condensed for clarity.