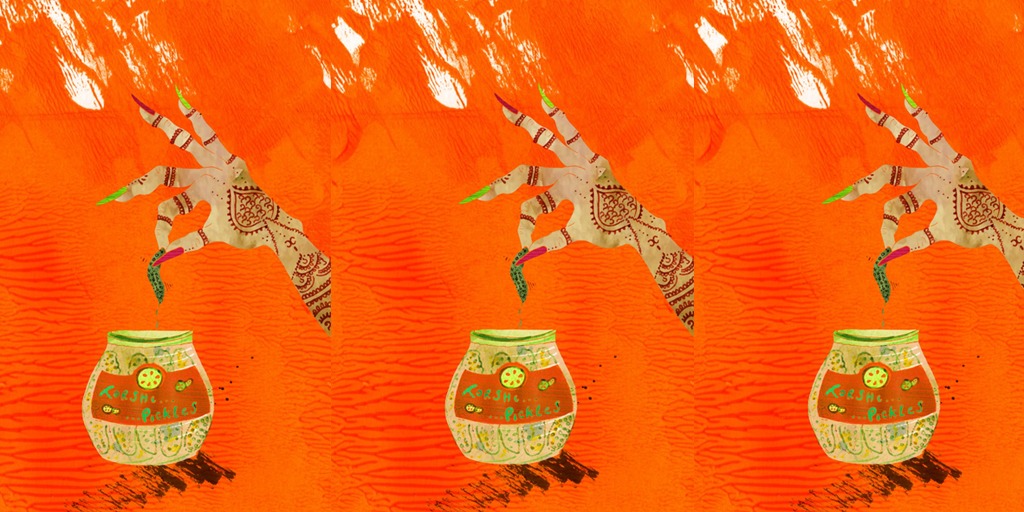 Are PoC very superstitious? Rituals, well wishes, and warnings may seem silly, but for the diaspora, they’re a path that leads you back home.

Hannan Issa was visiting her aunt in Jordan when she first heard the superstition about periods and pickles. “She had brought lots of Iraqi food for us to try and this included a jar of pickles, or torshi in Iraqi Arabic,” she tells me. “One day she angrily came into the living room asking if either my sister or I had opened the jar while on our period as all the pickles were spoiled.” It might sound like a joke, but Issa tells me she was deadly serious – her aunt truly believed that opening a jar of pickles while menstruating ruined them. She isn’t entirely sure where the superstition came from but it was enough to leave her speechless at the time, especially since she hadn’t even touched the pickles.

The West has many of its own superstitions. They’re defined as a belief in the supernatural, often manifesting in the idea that a particular action will lead to positive or negative fortune for the person. Carrying charms for good luck, wearing your “pulling knickers” on a night out, avoiding black cats (about 70% of cats in shelters are either black or black-and-white) and not opening an umbrella indoors are all examples of them. For most people, these are routines they habitually do without any real belief in their ability to alter events.

Within diaspora cultures such as my own Indian heritage, superstitions felt much weirder to me growing up, a bit embarrassing even, partly because of how seriously they were taken. If my mum told me one, it was because she truly believed it. In contrast, children in my class had never heard of them and would probably laugh at me if they knew I was avoiding certain precious stones as they could bring a bad omen, throwing salt for good luck and cleaning the house for Diwali so the goddess Lakshmi would visit. I grew up around these things as unquestioned facts, scared to share them with friends out of fears they would think I was strange.

But, there’s homely comfort in these beliefs for diasporic families. My mum instilled in me that eating boiled almonds would help me pass my GCSEs. Despite externally ridiculing it as a horribly angsty teenager, I still followed the ritual as it was somewhat comforting and relinquished some of my anxiety. This is often the charm of believing in superstitions – life is chaotic and unpredictable and believing you have some control to restore order is incredibly appealing. In all fairness, my exams went fairly well, so maybe she was onto something. I should have been less of a shit.

Across the world, there are a number of beliefs that inflict the supernatural onto benign everyday occurrences and spark fear and unease. Superstitions that have circulated Carribbean culture, for example, say that if a lizard lands on your leg you’ll get pregnant and that leaving a bag on the floor will result in you losing money. In Cameroon, sneezing is said to be a sign that someone is thinking of you.

The concept of the evil eye, in which a person is “cursed” by a malevolent force if they attract its gaze, is a common belief in Indian, Turkish, Pakistani, Israeli and Afghan cultures, among many others. Meenakshi Bala, a 24-year-old of Tamil Eelam heritage, explains that one of the superstitions she grew up with was that in order to remove the evil eye, you would need to spit on soil and dried red chillies before putting them outside and setting them on fire. “I insist my mum does this for me regularly because the evil eye is 100% real,” she says.

Similarly, Sidrah Zubair’s grandma of Pakistani origin instilled evil-eye fear in her. Like Meenakshi’s family, her grandma had her own way of staving it away. “If my grandma thought someone had given me or another family member the evil eye, she’d get an egg and move it around the person three to four times while reciting a prayer,” before throwing the egg away outside, the 22-year-old explains.

While it’s not always as specific as the evil eye, bad luck or bad omens are another common thread among superstitions. In Chinese culture, a big taboo that has continued through generations is to never leave laundry that was initially hung in the sunshine out overnight. It’s thought that if you don’t retrieve it back before dusk falls, wandering spirits will attach themselves to the clothing, taking over the personalities of whoever puts them on. Meanwhile in Mexican culture, superstitions make something as vital and restorative as water the enemy. “My mother believes that drinking water when under emotional duress – after receiving bad news or being deeply terrified – will cause diabetes,” explains Lille Allen, 22.

While diasporic superstitions can feel incredibly macabre and unsettling, some told me they still see them as a positive thing. Andrea Drizzle, 30, remembers her parents sombre faces after hearing one of her dreams as a child. “I would come downstairs in the morning, and we would always tell each other our dreams,” she tells me. In this instance, she told her parents she’d dreamt someone was trying to take her teeth out. It’s a pretty horrendous dream for any child undoubtedly, but it was their reaction that shocked her. “My mom looked at my dad and just gave him this really serious look.” They looked like someone had died, she says. But that’s because in their minds someone had; dreaming about teeth was a sign someone you know has passed away. They then began listing off names of people who could have possibly passed away overnight.

“If my grandma thought someone had given me or another family member the evil eye, she’d get an egg and move it around the person three to four times while reciting a prayer”

Andrea found the situation really funny and thinks the belief could be rooted in Venezuelan superstition. Ultimately she appreciates that it’s part of who she is. “I love all the particular things that are part of my culture,” she explains. “It connects me with them and others”.

Knowing where beliefs such as these stem from is incredibly difficult, as they shift in nature over centuries. Many Western traditions come from a belief held by the Romans or a Biblical reference which has adapted over time, for example. One suggestion for why the number 13 is unlucky is that Judas (the disciple who betrayed Jesus) was the 13th person to arrive for the Last Supper, while the idea that breaking a mirror is unlucky is thought to be the result of ancient Roman culture, where it was believed that mirrors held part of the soul. For diaspora cultures in the West, many have been adapted even further with the geographical shifts, incorporating elements of the new assimilated culture.

However for some, unsettling superstitions are a map of family migration. Zuleika Lebow, 29, struggles to know where her superstitions came from. She learnt as a child not to put a handbag on the floor as it would cause you to wish your money away; to cover your mouth when you yawn or it would let bad thoughts in; and to always greet your house when you got back home. The latter meant saying “Hey, house” anytime they came home – an endearing ritual I’m tempted to adopt myself. All of these came from her grandparents who she says were British-born but of Ashkenazi Jewish descent from Latvia, Lithuania, Belarus and Poland. “I suspect they’re a mix of British and Baltic superstitions,” she explains. This mix of beliefs mirrors her history – she’s unsure which elements come from which area, but they’ve come to represent her unique heritage.

As members of the diaspora, it can feel frustrating to not be able to understand why our relatives hold onto seemingly irrational beliefs. There’s a fragmented jigsaw of things we took for granted as children, but curiosity and our ability to believe in the unbelievable is one we should hold onto. We should take every opportunity to interrogate our cultures, even the customs that once scared, unsettled or embarrassed us.

One thing that was universal from speaking to a diverse group of people about their diaspora superstitions was the degree of overlap: most of them are attempts to protect from misfortune. Superstition is the antithesis to the norm. The fact that we internalise our own as the weird ones is probably due to our own niggling feelings of abnormality as minority communities.

In reality, you could argue diaspora superstitions are incredibly natural.Is it really surprising that our parents held onto rituals related to aspirational things such as money or job prospects, when they were uprooted to the West, a place where the odds were already stacked against them? They’re our own culturally specific methods of keeping the lives of the people we love on track. That’s a much less spooky thought.