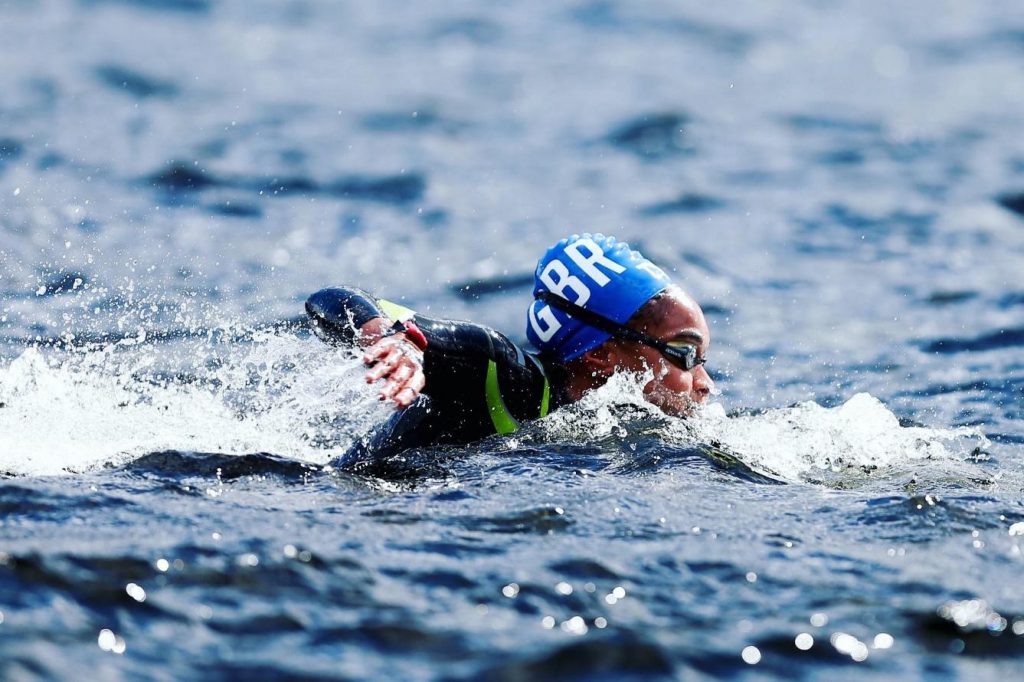 We all know the stereotype that black people don’t swim. I’m not sure where it originated – although I’m sure the answer is lurking somewhere on the internet – but it has caused so many black people to turn away from a life skill and a potential sport where they are underrepresented. It is estimated that ethnic minorities are three times less likely to know how to swim than white people.

My name is Alice Dearing, I’m currently 22, and am the second black woman to compete for Britain in swimming – behind Achieng Ajulu-Bushell who did so in 2010. I made my first senior team in 2014 for open water at the European Championships. Since then I have competed at three European Championships and two World Championships (soon to be three this week). As well as many other international events competing with the GB flag on my swimming hat.

I started competitive swimming when I was nine, with my brother who was 14 at the time. We lived in a diverse suburb on the outskirts of Birmingham, so there was a higher proportion of non-white swimmers in the area compared to other parts of the country. Because of this it never dawned on me that we were such a small minority; the majority of the clubs I have swam at have always had at least one other non-white swimmer. Whilst not a high enough percentage to reflect the population in the surrounding area, I never gave a second thought about mine or my brother’s race.

It wasn’t until I was about 11 that it occurred to me that not everyone saw us as the same. I remember overhearing a girl say: “I don’t want to swim with any Indians”, to which the other girls around her squealed out of shock and laughingly told her she couldn’t say that. I knew this was not aimed at me, firstly because there was an Asian girl who swam with us and secondly, while you could argue my mixedness made me “racially ambiguous”,  my mother (who is black) was always the one to take me swimming, so it was clear what my ethnicity was. But I can still remember how this comment saddened me at the time, and struck something deep within me that I didn’t know existed.

People would also approach my mother and say things like “we didn’t expect Alice Dearing to look like that!” We would laugh about this, thinking they were referencing the fact that I was small for my age, and was competitive with the other girls. But it could also be judged to mean they didn’t expect a girl with a very “white-sounding” name to be black. And here is the trap I never want to fall into; unnecessarily making myself a victim of discrimination in an environment where I am an obvious minority. I still don’t know for certain what those parents meant when they said I wasn’t what they expected. I was (and still am) small for a swimmer – their thoughts could have been completely non-race related. I have been fortunate not to experience any direct racism – apart from a comment made from a coach to another swimmer, calling me a “skinny n****r” when I was 17.

Looking after my hair is difficult. Growing up, my mum would braid and relax my hair for me just to make things easier day to day. Swimming eight to 10 times a week with gym sessions on top of that meant doing hair in the middle of the week would be wasted energy. I made the decision to “go natural”, i.e. stop relaxing it and embrace my curls, in the middle of 2017. And it was a hard year and a bit, having two very different textures of hair and training getting my hair wet and dry multiple times a day. I hated how I looked and was grateful when I finally got “the chop” (cut off the old, relaxed hair) in September 2018. Whilst the chlorine damages and dries out everyone’s hair, arguably it is harder for black women – hair can be so intertwined with our identity and the water completely changes the quality of it.

Although I have bantered about my race in the past with other swimmers, it is something I’ve stopped doing. As I’ve grown older, I see the potential diversity I bring to a team as something that should be respected. I’d love if we didn’t need to have to have conversations about diversity and I could just float along happily, without addressing the lack of black people in swimming – both competitive and leisure. But coming up to my fifth year swimming for Britain on senior teams, I might as well use my voice and try to encourage more people of colour to take to the pool.

In regards to currently being the only black woman on the team, I don’t see it as negative; in an ideal world it would perfectly represent the population of the UK, but the current lack of diversity doesn’t mean that can’t happen in the future. In 2016 the US saw the first black woman to win Olympic gold in the pool in the 100 metre freestyle – and I wholeheartedly believe in representation affecting participation.

At age group swimming competitions I have seen more and more people of colour swimming and taking part, much more so than when I was that age ten years ago. Hopefully, in the future this will lead to more people on GB teams too. The stereotype of black people not being able to swim is slowly dying. I’m excited to be a part of it.