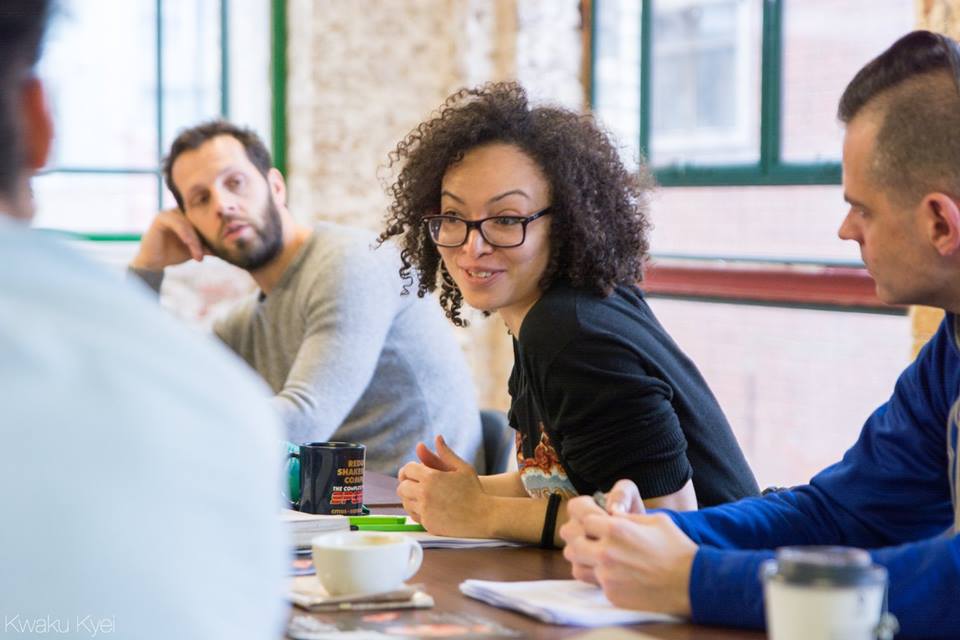 How do you reconcile your identity as a mixed race person in the UK today? What impact does social media, and the ceaseless stream of online commentators have on your perception of self? #HashtagLightie, a new play which had limited run at the Arcola Theatre, raises and explores these questions through a window into the lives of mixed white and black Caribbean siblings, the Millers. When the youngest Miller, 15-year-old Ella, starts a YouTube makeup channel called #Lightie, attempting to celebrate mixed race beauty, each of the siblings’ perceptions of their own identity are questioned.

gal-dem spoke with writer Lynette Linton as she made her way across London from the Gate Theatre, where she is Assistant Director, to a Q&A for the afternoon’s performance.

gal-dem: Hi Lynette, thank you so much for a terrific play last night, it was clear from the audience interaction in the Q&A that the conversation around mixed race identity in the UK still needs to be had. But let’s start with how you got into playwriting.

Lynette Linton: I started writing when I was in school. I used to write novels because I was obsessed with Harry Potter and Noughts and Crosses by Malorie Blackman. I used to write a chapter a day and bring it in for everyone to read in class. My mum used to say “you’re going to be a writer” and I used to say “no, I don’t want to be a writer, I want to be an actress”! And for a while that’s what I wanted to do. I went to university and studied English and continued acting, and then I went to the National Youth Theatre when I was 21 and met Rikki Beadle-Blair (Director of #HashtagLightie). He does the new writing festival at Stratford East and asked me to write a play. I wrote a play which was commissioned about moving out of East London, going to University and realising that the rest of the country is not London. That went down pretty well, and from there Stratford East supported my career, gave me space and time to develop another play that I wrote called Chicken Palace that was on at Stratford East in 2015. And since then I have been writing and writing and writing.

I also started to direct as well. After I worked with Rikki on set he said, “You should think about directing, you’re a little bit cocky”! He asked me to assist him on his show Gutted and then I started training to become a director in different theatres. Then, in 2015, I assisted at The Gate Theatre and kept my relationship with them going and am now Associate Director. I’ve constantly been working, I’m exhausted!

I bet! It’s great to have that kind of career where you just keep going, it’s so lucky to find those opportunities. Although I’m sure it’s also down to a lot of hard work. Rikki mentioned last night how hard you have been working to get to where you are.

It has been quite difficult, I have had to work part time for a couple of years to make sure money was coming in. My biggest thing was just having this motivation from not seeing myself on stage, not seeing stories on stage that resonated with me. You can’t go to a theatre and say “put my play on #HashtagLightie” – what does that even mean?! But obviously there is an audience out there for it. There is a voice that needs to be heard, so you just kind of have to do it yourself. But then work out how you are going to get into the mainstream theatre because we need to be doing that as well.

One of the things I noticed was how you have worked with a different Arts organisations like Ideastap and Stonecrabs. How important do you feel those kinds of organisations are for women of colour within the UK to get their voices heard within the theatre?

Really, really important. Ideastap has closed down now which is such a shame as they would give funding to people who were at the early stages of their career. It’s such a shame as I really miss that platform and I know a lot of people do. Stonecrabs are amazing because they give help to people who have thought that maybe they want to be directors but are not sure what to do. I think it’s really important that more things for free need to be set up. The courses for directing especially are hundreds and hundreds of pounds and I could never have afforded that. I was incredibly lucky in a way that I met Rikki because then he was like “come and shadow me, come and assist me”. And then I was able to go “okay cool, I’ve learnt what I can from you, what do I do next?” And then I found Stonecrabs which was also free. So in that sense I didn’t spend money to learn, where a lot of people do. That’s a really important thing, for there to be accessibility for people, wherever they are from or whatever they want to do.

The closure of Ideastap shows in a way how we are still not moving forward. Hiive have sort of taken over from what they did now but it still doesn’t feel like there is enough. The Arts Council is the main funding body in this country and if you don’t have Arts Council what do you do? If Arts Council say no to you month after month it doesn’t mean your work isn’t good enough.

As both a writer and director, have you ever been tempted to direct your own work?

I co-directed my own play Chicken Palace last year, it was brilliant. I think sometimes it’s good to step back and let someone else take on your work cause they’ll bring a new world to it and you’ll think “wow, I’ve never seen that before”. But I’m a bit of a control freak! Because I’m a director I can hear exactly what it should sound like in my mind. I can hear the characters voices. Especially with shows that I’ve written for actors like #HashtagLightie. Devon Anderson (playing Aaron Miller) had been cast in the role for the last year, every time I wrote lines for him. Same with Chicken Palace, the actors were cast a year before we put it on so I could hear how I wanted them to say it. But then having another director in the room, someone like Rikki, is amazing, because he goes, “have you thought about emphasising this word” and it just changes it completely. I think it’s a toss up, after Chicken Palace, I was like, “I never want to direct one of my plays again!” because I want to work with as many directors as I can. But never say never. 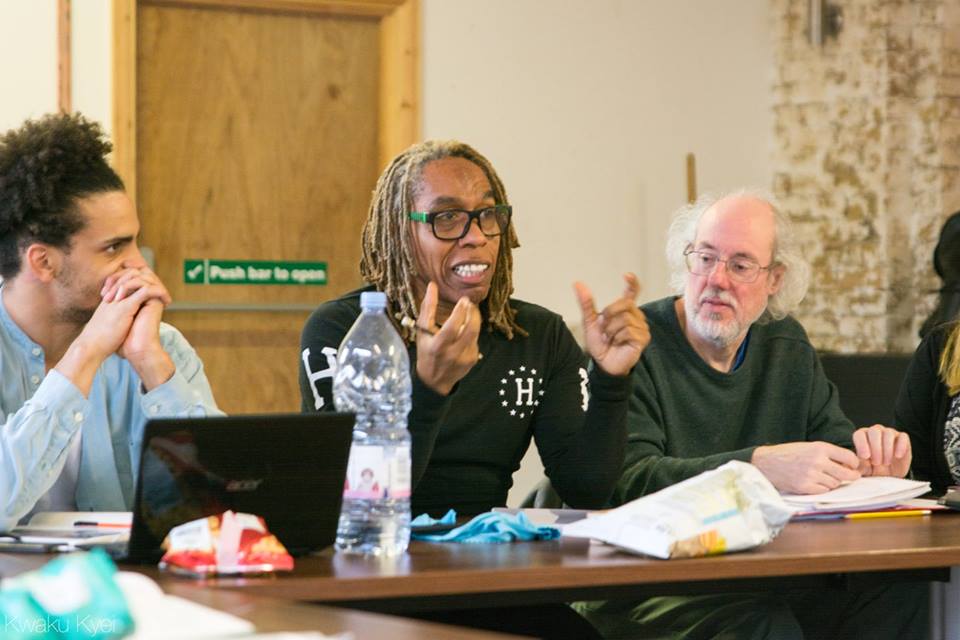 Were there any particular bloggers that you had read about that inspired using Ella as the protagonist?

No particular person as such, it was more the comments around some of the different blogs I had looked up and things I had seen. I had watched a video of Tia and Tamera on Oprah discussing the abuse they had received in their interracial relationships. That was the spark that made me want to explore how our identities can be influenced by online. From there, I started looking at comments and from there started looking at bloggers. I looked up hundreds and I have merged personalities from America and the UK to inform Ella’s character. It was more about the comments that people get on their blogs than an individual blogger.

No, I don’t really. Myself on twitter?! Sophia (Leonie) in the play has a blog, from a female perspective commenting on the world and goings on. I read hers now and again.

Do you consider your plays to be political, or are you more concerned with telling the human story?

When I look at the three plays I’ve had staged, Chicken Palace was commenting on the gentrification situation in East London and how the Olympics has come and Stratford had suddenly become two different places; where Westfield is and where the old Stratford is. I realised I was really annoyed by that and people coming in and not appreciating the people that were there before. Chicken Palace, which started as a comedy, like a murder mystery, turned into a piece that said a lot about the local area. Same with #HashtagLightie. I wanted to explore being mixed race and then it merged this whole conversation about light skin, dark skin, and what it means. So for me, and the theatre that I make, it’s a bit of both. Assata Taught Me (upcoming at The Gate Theatre in May), is based on an imagined friendship between and Assata Shakur and a young Cuban boy and looks at black identity from the point of view of a black Cuban and an older African-American woman. So there’s politics involved in that. The stories that I tell are fundamentally human, but some of the stuff I am working on right now does have a political backdrop.

#HashtagLightie ran from 4th Feb at the Arcola Theatre. Booking is currently open for Assata Taught Me at The Gate Theatre running 4th – 27th May.