‘It’s like they want brown faces, not brown people’: BBC staff are being silenced after the Naga Munchetty complaint 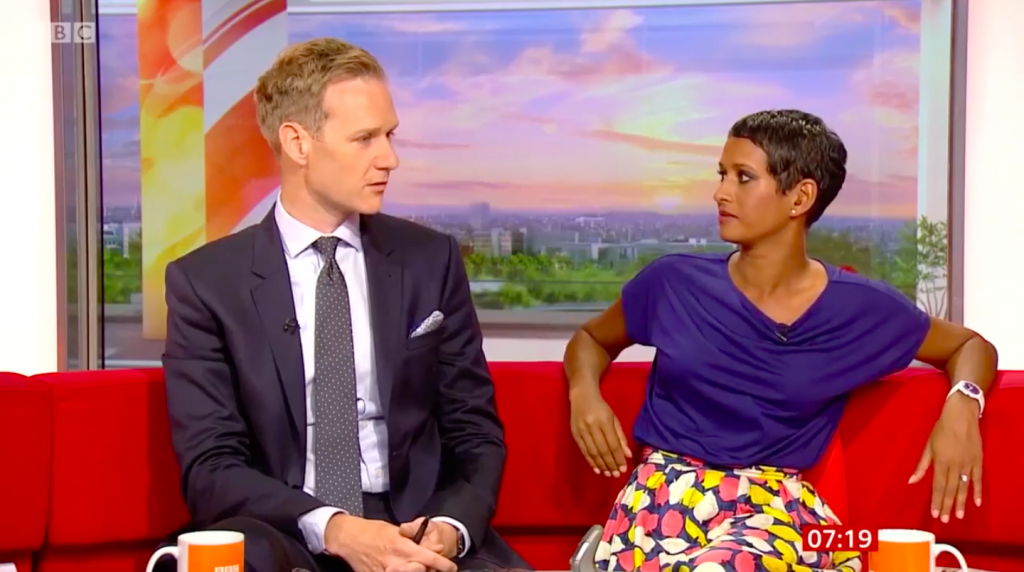 This week, in what most outlets would call a “race row”, BBC Breakfast presenter Naga Munchetty was subject to an upheld complaint by BBC, bringing the broadcaster under serious scrutiny. Saying that Donald Trump’s use of the phrase “go home” was “embedded in racism”, and that she was “furious” he had used it, the company line is that Naga broke the BBC’s impartiality policy. But many people of colour beg to differ.

When I speak to Hannah*, a BBC staff member who couldn’t use her real name for this piece, we’re typing over WhatsApp instead of having a conventional phone interview. It’s imperative that colleagues don’t overhear our conversation, so she asks if we can stick to messages: “I’m in the office all day, so might be easier…”

This isn’t so dramatic considering the circumstances – as Hannah and I speak, #IStandWithNaga trends at number two in the UK, and an open letter signed by media figures like Angela Saini, Lenny Henry, Krishnan Guru-Murthy and gal-dem editor Charlie Brinkhurst-Cuff, is published in the Guardian. But BBC staff members have said that they have been internally warned about speaking out amid the backlash – which feels like a second instance of people of colour (PoC) being silenced when calling out racism. In a statement following backlash, the BBC stated that criticism “is based on a misunderstanding of the editorial guidelines and how they apply”.

In a further statement to gal-dem, a spokesperson said: “We know there has been a lot of debate on the issues raised last week, but the statement from the executive team on Friday is clear, the BBC is not impartial on racism. Racism is not an opinion and it is not a matter for debate. Racism is racism. Naga has the very clear support of the top of the organisation.”

In some ways, this course of events is unexpected. The BBC has worked to establish a reputation for diversity within its ranks. The broadcaster has a comprehensive diversity strategy – which includes an investment of £10 million – and opens its 2017 diversity report with an A4 spread of Naga sat on the studio’s trademark red sofa. The organisation’s prestigious journalism trainee scheme has also been praised for developing young journalists of colour. For these reasons, the BBC describes itself as a “diversity champion”, and the journalists who spoke to gal-dem describe it as one of the better UK outlets when it comes to its coverage of race.

Sabrina*, another BBC staff member, tells gal-dem she was surprised by the handling of the complaint against Naga. “I remember at the time of Trump’s comments, an email went round from our DC bureau chiefs telling us that reporting on Trump’s comments as ‘racist’ was fine and factual, that we didn’t have to skirt around it by using ‘alleged racist comments’, or ‘comments which have been criticised as racist’.” Sabrina emphasises that for reasons like this, she is proud to be a BBC journalist, and that in many instances, the broadcaster covers racism sensitively.

But after the ruling on Naga, it seems there is still some way to go. Journalists of colour are already systematically silenced within the media – which makes the knock-on effects of incidents like this all the more significant. Broadcast journalist and author Afua Hirsch, who started the open letter, tells gal-dem that the BBC’s decision won’t only affect its credibility, but also represents poor staff treatment. “Its ruling treats the expression of an overtly racist statement – which is what Donald Trump’s ‘go home’ comments are widely accepted to be – as an opinion that should be treated ‘impartially’,” she says. “That sets a dangerous precedent that legitimises racist views, and sends a message that broadcasters of colour should be expected to debate their humanity and right to exist live on air.”

Patrick Younge, who was formerly the BBC’s most senior black executive, agrees, describing the ruling as a “bad mistake”. “This is a judgement that will have a chilling effect, it will make [PoC] staff question whether they can really be their authentic self and work for the BBC.”

Hannah says the move completely changed the way she thought about the corporation’s approach to diversity: “First, it made me really angry, and then just sad… There has been a focus recently on championing diversity. But the ruling made me question all of that — like they just wanted brown faces, rather than brown people, all along.”

Sabrina agrees, saying: “the decision also makes me angry – the BBC is so preoccupied with appearing impartial that it’s blind to its own biases. It’s like the BBC guidelines don’t want to ‘see colour’, but we all know how flawed (read: ‘racist’), that logic is.”

“If we don’t use our experience to inform our journalism, then we are nothing but mouthpieces for propaganda, and our representation within the BBC is nothing but tokenism.”

The double standard between the treatment of Naga, versus that of her white counterparts in the corporation, sends a particularly stark message to journalists of colour. Patrick says: “In the final exchanges it’s her co-host, Dan Walker, who goes further to attributing motive than she does.” Patrick points to the fact that Dan said during the on-air exchange that Trump’s racist rhetoric “feels like a thought-out strategy to strengthen [Trump’s] position”.

In addition to this, Nick Bryant, a white staff member who works as the BBC’s New York correspondent, directly called Donald Trump’s “go home” remark racist on Twitter in July. This happened seemingly without reprimand (the tweet is still up as of 28 September). The takeaway for BBC journalists of colour is that the rules are stricter for them.

“It feels like they just wanted brown faces, rather than brown people, all along”

Of course, one partially upheld complaint doesn’t give us the whole picture – it instead points to wider issues regarding how the BBC operates as a whole. Patrick feels that rulings like this shouldn’t be viewed in isolation – they point to problems in the wider organisational structure. “The biggest failure in the BBC is their inability to recruit and retain [PoC] staff and promote them to the highest levels of the organisation,” he says.

Gary Younge, brother of Patrick and editor-at-large at the Guardian, agrees, telling gal-dem: “[The BBC is] an institution that is geared up for a notion of objectivity and fairness – but we were never included in the making of that notion. We weren’t in the room. For the most part, we’re still not in the room.”

Gary says that it’s not as simple as what he calls “black faces in high places” – we need to ask ourselves “who’s in front of the screen, and who’s behind the screen”. Pointing to the discrepancy between people of colour in audience-facing roles, and people of colour involved in production, strategy and decision-making, Gary adds that historically “the BBC were quick to bring in black people reading the news, but it took a long time to get any constant non-white presence on the Today programme.”

“I think they thought ‘well you can’t see them, it doesn’t make any difference!’”

The presence of structural problems is also evident to Sabrina during day-to-day editorial decisions. “The BBC absolutely has a problem with race and diversity – you see it in most teams. I once remember flagging up problematic language in our reporting, but the senior white male editors stood by it. The problem is that you’re fighting too many (often white) individuals with unconscious bias that makes it hard to keep fighting from within.”

“The BBC absolutely has a problem with race and diversity. It’s hard to keep fighting from within”

Hannah says that she doesn’t think this issue is necessarily a problem confined to the BBC, but one that’s present across the UK journalism industry. “Overall British journalism is still 94% white, and of all the places I’ve worked, the BBC is not the worst on race.” And this is true – beyond the BBC, we see the effects of structural whiteness time and time again in the media we consume, from white editors producing articles laden with cultural inaccuracies to skewed panels where one person of colour is burdened with the emotional labour of explaining racism exists. This is compounded by the pay gap of up to 20.8% that BAME broadcasters still face.

What now feels crucial, is the need for the BBC to interrogate what it sees as “impartiality” when it comes to race. This means overturning its decision on Naga, but more broadly, consciously adjusting its policy to treat racism as objective fact. Gary thinks that if the BBC puts time to it, this is easy to do – it’s just about assessing what’s an objective, indisputable phenomenon. “Like with the case of climate change… it’s about interrogating – okay, some people say this isn’t racism, but how credible are they?”

Hannah says that part of the solution lies in reconceptualising what “diversity”, or any other strategy pertaining to race, really intends to achieve. “There needs to be an understanding among senior editors and managing editors that diversity doesn’t just mean people who don’t have white skin, it means a diversity of experiences that people should feel free to share in their work.”

“At this moment in particular, it’s more important than ever that we say what we see”

And as Gary points out, the BBC don’t call it “so-called climate change”, but this ruling demonstrates that the language of objectivity urgently needs to be extended to conversations about racism. Whilst impartiality is a complex concept that evolves and changes over time, Gary says that the current political climate of growing far right racism calls for it. “At this moment in particular, where we’re seeing not only the rise of the far right but the ascendance of the far right into positions in the media, it’s more important than ever that we say what we see.”

What seems clear is that while this is by no means an issue restricted to the BBC, the broadcaster holds immense power in setting the industry standard of what is deemed “impartial”, or in other words, neutral. To earn back the trust of both its PoC audiences and staff members, it now must use that power wisely.

*Names have been changed for anonymity