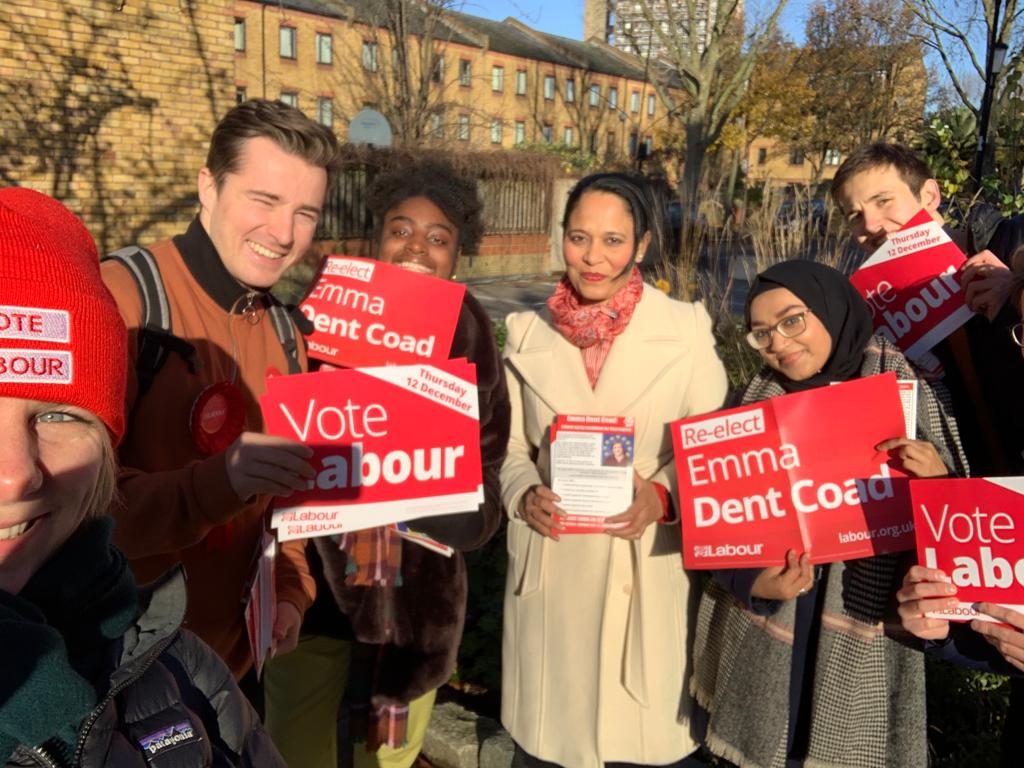 We have two more days to get out and fight for a revolutionary change. I am urging you all to pull on your thermals, don your turtlenecks and join people across the country in the final two days before the election.

It doesn’t matter if you have never canvassed before. There are many Labour candidates who would love to welcome you into their campaign families, especially in the crucial two days in the run up to polling day. And if you’re new, there will be people there to train and support you.

Over the last few days, I have met many voters who are undecided. This presents a great opportunity for us to convert them into Labour voters. Recently I came across a mother of two who had decided she would not be voting for any political party in the upcoming election. Why? She said that politics and politicians had failed her family.

As I continued to talk to her, I came to the crux of her frustration. Her entire family (four in total) lived in a cramped one-bedroom apartment. It was the only home they could afford, even though she and her husband both worked. It was a pretty harrowing experience listening to her detail health issues which had arisen from living in overcrowded accommodation. After explaining the Labour Party’s policy to tackle overcrowding and affordable housing, I left them with an “I’m Voting Abena Oppong-Asare” poster and their pledge that they would vote for our local Labour candidate.

“It doesn’t matter if you have never canvassed before. There are many Labour candidates who would welcome you into their campaign families in the crucial two days before polling day”

This story is like so many that I’ve been hearing on the canvas trail these past few weeks. It speaks of the confusion, lack of trust, and despair that the past few years of harsh Tory policies and political turmoil has created. Two days before the election and the story is still the same.

Last weekend, I was disheartened after knocking on the door of a Caribbean man, who told me in no uncertain terms that he would not be voting in this election. Who can blame him – the Windrush Generation and so many marginalised communities have been let down by the hostile environment created by the Conservative party. I wished that he had given me a bit more time so I could have helped him see the power that voting can have.

Speaking with people like him is emotional. You can see how years of cuts; divisive and hostile policies have had a huge impact on people of colour and working-class communities. For some, it feels like politics is the problem, and can’t be the answer.

There are many more people like him I have come across in the last few days and with a couple more days to go I anticipate I will meet many more. But this is good, because you never know who you will motivate to go out and vote and each vote counts.

Yes, we’ve had doors slammed in our faces and today I had a mother yell at me for advocating on behalf of Labour. Thankfully, we haven’t experienced anything like what our Labour comrades in Hereford and Rotherham have faced.

But mostly, my experience of canvassing has confirmed that politics can and will be that answer. The sense of community in the build up to this election has been completely heart-warming and overwhelming. So many people want change – and so many people are giving up their time to go out on the streets, speak to neighbours, friends and strangers, and do what they can to help people see there is a way to a more positive future.

The exciting thing about canvassing is that you never quite know what you’re going to get on the doorstep, or even on the streets. It’s great when cars drive by, showing their support for Labour by honking their horns in solidarity. It’s even better when you meet three generations of one family, who speak to you about how hopeful they are for a Labour government.

You get to meet some amazing people, too – like the young man who told me he wasn’t old enough to vote, but that he would make sure everyone in his household voted Labour. Or the elderly guy who stopped us on the street mid-canvass to let us know that he didn’t like our Leader and would vote Conservative. It only took one minute to ask him what his values were, before finding out he was a former Labour voter. Once we spoke to him about key areas like education, local council issues and nationalising the railways he changed his tune.

If there’s one thing door-knocking in this election has taught me, it’s that amidst this political turmoil and despair, people will come together in the most beautiful ways to fight for a society that benefits the many and not the few. Canvassing has been cathartic and has given me the opportunity to make a difference and turn out the Labour vote.

I have a great feeling about this opportunity for change. If canvassing isn’t your thing, or you simply aren’t able to, there are other ways to get involved. This is especially important as I know of the fears many of my Hijabi Muslim and PoC friends have. They worry about the Islamophobia or racism they may face on the doorstep. For them phonebanking is a great and powerful alternative. Other ways to help include sorting leaflets or buckling down in many of the campaign hubs that will be set up on polling day.

According to Best for Britain analysis, there are over 57 seats where we can oust the Tories. If you want to unseat the architect of Universal Credit, head to Chingford and Woodford Green to support Faiza Shaheen. If you’re closer to South, skip along to Battersea to campaign alongside Marsha De Cordova. Wander out east to Erith and Thamesmead to help us elect Abena Oppong-Asare, the first black prospective parliamentary candidate for the constituency.

Being surrounded by such positivity has given me hope and a new vigour.  Together we can do this – we have two days left.

If you want more info on what you can do in the next two days, use Momentum’s Plan to Win tool.