Jools Walker talks biking whilst black, mental health and how her debut book is encouraging women to get cycling 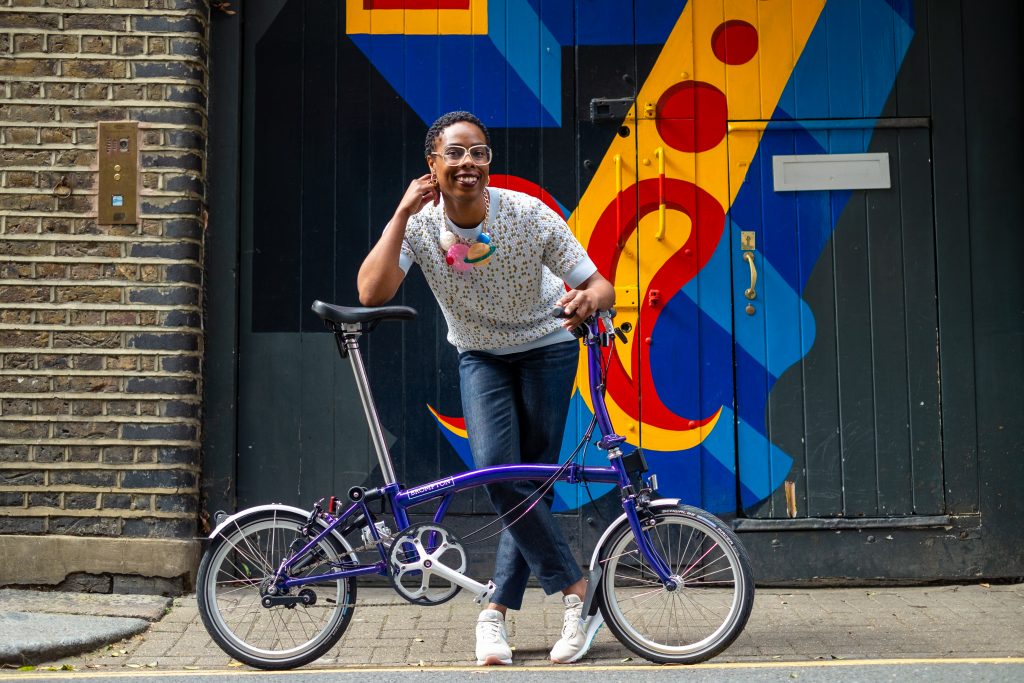 Ever since my mum pushed me down a hill without my stabilisers on aged eight, I’ve always got a thrill from cycling. But the older I got, the more I believed that girls like me didn’t actually cycle as adults. I only ever saw a few black women on bikes lost amongst the hordes of middle-aged men aggressively weaving through traffic in unforgiving Lycra. I loved cycling but it felt like cycling just didn’t love me back.

Apart from riding on the occasional Santander bike, and randomly partaking in extreme biking on holiday, cycling didn’t properly come back into my life until a few years back. Eventually, a mixture of wanting to save money, time and the environment lead me back to the idea of bikes. So, I decided I wasn’t going to be scared anymore and I took home a friend’s old blue bike, and saddled up. Sadly the process to get me back on my bike took over a decade and it might have happened sooner if I’d known about other black women cyclists like Jools Walker.

I first met Jools (also known as Lady Velo) back in 2017 on a panel about activism and marginalised voices at WagFest. I was a bit nervous, but we got chatting and it was a joy to speak to someone who understood the complexities of being a black woman in London who loves cycling too. Jools is already a big name in the cycling scene, mainly because of her hit blog Velo City Girl, where she documents her world as a black woman who bikes.

Now, she is loudly reclaiming space in the cycling scene and making the world that little bit less intimidating for people like us. Her debut book, Back in the Frame: How to get back on your bike, whatever life throws at you, takes a deep dive into her personal life, and the realities of cycling for women of colour.  We chatted on the phone a day after her the launch to chat cycling black families, mental health and the importance of representation.

gal-dem: So when did you decide it was time to transition from blog to book?

Jools Walker: The idea of putting together a book formed three years ago. As cliche as it sounds, I felt like I had the experiences from myself and other women of colour, who I wanted to talk about and who have gone through struggles in regards to a world that doesn’t necessarily feel like a space for them. This wasn’t just going to be a cycling book, that’s not just the soul of the book at all, there are so many more elements to it.

I had a literary agent approach me, we sat down and went through the ideas I had. There was no guarantee it was going to happen. I still consider myself to not be someone to have this kind of opportunity. Publishing is wild! I learned over time with all the meetings and publishers, how interesting it is as a black woman trying to get into the world of publishing. That was eye-opening and a whole other story in itself.

Many of us can cycle, but for women, especially women of colour we just stop cycling as we grow up. Why do you think that is?

I started on my sisters hand-me-down BMX. I was seven years old, my parents couldn’t afford to get the bike I wanted outright. I was so in love with my sister’s bike and in love with her attitude. It was around the time that BMXing started to blow up in the UK. She used to get loads of stick for it as a young black girl, but she didn’t give a shit – that’s something I respected about my sister. The friends that I used to ride around on the housing estate that I grew up on, and still live on, we were our own little crew and a family. I didn’t imagine there would become a point where I didn’t feel comfortable on my bike anymore, or a time when I was going to have to put up with catcalling. The innocence of your childhood and just being on a bike and enjoying something felt like it was robbed from me when I hit my teens. I gave it up.

It’s one of the hardest things getting back into. It’s a joy when you’re there, but putting yourself in that world can be strange, especially when you’re not seeing yourself reflected. You wouldn’t magically think “this is the place for me”. It is still perceived as being a very white middle-class activity. It’s very male pale and stale.

Quite often for black and brown women, our parents discourage us from cycling as we get older, especially in London on the road. What we do to stop this fear from being another barrier to cycling?

I’m 36 years old and I still have this conversation with my mum every time I get on a bike! She’s proud of me and she’s happy I found the joy I used to get as a kid. But it still gives her the fear of God every time I go out. Talking to your parents about it is essential, I’m educating my mum as I’m educating myself. The funny thing is, my mum used to ride a bike when she was in Trinidad. The kind of people she sees on the road cycling – it’s speedy, they’re very fast, the lycra and the road bikes – you feel worried. Culturally, it might be ingrained into black parents! She sees how happy I am and how much I enjoy it, she knows if I get freaked out on the road I will get off and walk with my bike. Talking to our elders, talking to our parents is really important.

In the book, you talk about mental health and your own depression diagnosis. How has cycling and mental health informed each other in your life?

It’s been an interesting relationship between the two. I knew that I had depression from a very early age. I grew up with a parent who lived with depression. But again, that was something culturally that we just didn’t talk about. My mum is very open as she’s allowed me to write about it in this book, it was a huge chapter of my life. I didn’t get officially diagnosed until I was in my late twenties. I was juggling a full-time job, I was also a full-time carer for my mum, stuff was going good with the blog, and then everything just kind of went “pop” in my head and I wasn’t coping anymore.

Being in the cycling industry, and not feeling like you’re making any change in there is like you’re screaming at a brick wall, that was depressing in itself. I had these grand ideas, I wanted to make these changes, then when I got a job in the industry no one was listening to me. That was one of the things that knocked my mental health. I resigned from that job. I also had a stroke when I was working in that job. I had to pull myself out of it: reset and start again.

I went onto antidepressants. The thing that worried me was that my bike wasn’t making me feel better. I don’t prescribe cycling as a cure for depression. It hasn’t cured mine, it’s helped. But learning to ride my bike again and doing it on my own terms, the endorphins were running again, that moment of being able to reclaim my own time.