In the first instalment of her new column, Aleesha Khaliq explains why none of the Labour leadership contenders are lighting a fire inside her. 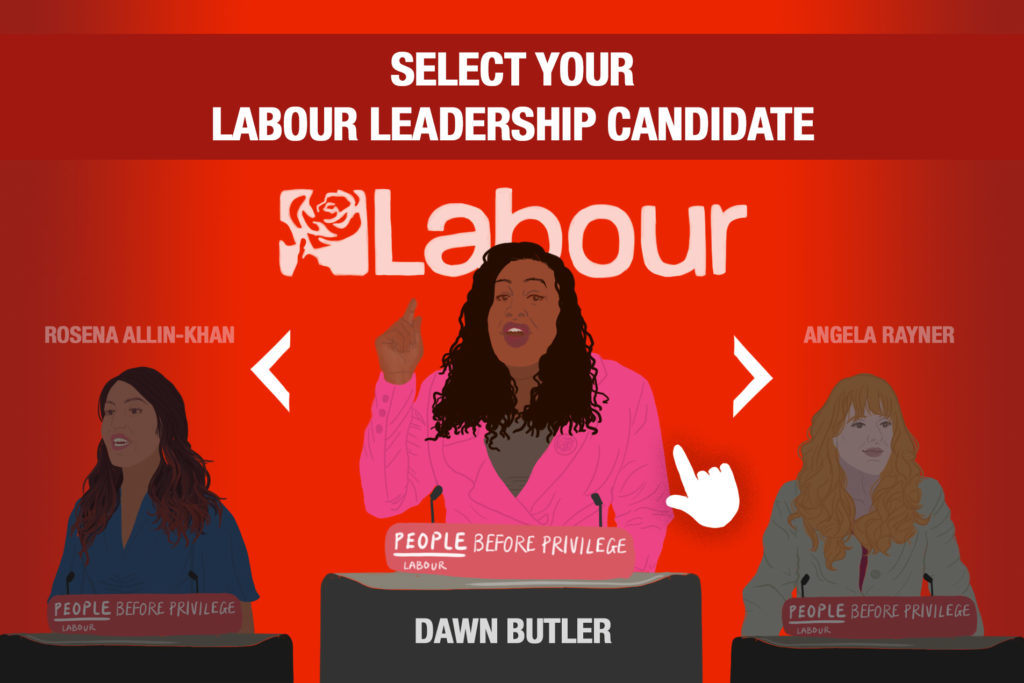 The Labour leadership contest has lurched into motion and it’s dredging up old memories for me. Looking back at 2015, I remember immediately voicing my support for Jeremy Corbyn. I was 17 at the time and fairly new to UK politics after watching Ed Miliband resign as leader.

Watching the 2015 election unfold and seeing how politicised my college was, I realised the importance of politics and that I aligned with some (not all) of Ed Miliband’s politics. But when Jeremy emerged, I was inspired, in large part because of his history of activism: his pro-Palestine action, his arrest while protesting apartheid and his vehement opposition to the Iraq war as a “rebel” MP.

To me, a politician who defied the whip again and again to stand up for the marginalised was a politician I knew I could get behind. He seemed like one of the only politicians with values and humanity, and it felt so refreshing after spending my youth hearing the widespread distrust of politicians after events like the Iraq war.

Fast-forward to 2020 and I find myself in a position of confusion and disillusionment. Not only because I’m unsure of which candidate to back, but also due to the lack of diversity within the candidates and the lack of support for the few who are POC. Understandably, many candidates either withdrew (Khalid Mahmood for deputy, Clive Lewis for leader) or didn’t want to stand (David Lammy).

Proposed policy and proof of commitment to the values I hold is what ultimately matters to me most but watching talented POC candidates fall by the wayside has been utterly disappointing. I wouldn’t have supported someone like Clive Lewis, with a past chequered by allegations of inappropriate behaviour. But seeing women like Dawn Butler and Rosena Allin-Khan have to work so hard just to make it onto the ballot at the last minute, has been a wake-up call. Especially while candidates like Angela Rayner hoovered up nominations long after she was past the threshold for what was required.

To be honest, I wish those three women standing for deputy were in the battle for the top job. Out of all the candidates, Angela Rayner, Dawn Butler and Rosena Allin-Khan seem the most like leadership material to me and it’s a hard choice between them as to who to back for deputy. But I’m going with Dawn; in her I see that passion, that anger, and that charisma and genuine care that politicians tend to lack. She’s always been strong on issues of inequality so she gets my endorsement for deputy – and would have done if she’d gone for leader too.

But when it comes to the candidates who are in the race for leadership, I’m more conflicted. Rebecca Long-Bailey ticks boxes: she stands up for socialist values, defends the rights of migrants, opposes systematic racism and makes sure to address problems facing all working class people; not just white ones. But she doesn’t light me on fire. I don’t see that Jeremy-like enthusiasm for change or that burning desire to come out and heavily oppose the injustices of this hard-right government. I find myself wondering whether she would resonate with the electorate or engage those voters that we lost in the election.

While Keir Starmer is polling the highest amongst Labour members, his voting record – such as voting against investigations into the Iraq war and voting in favour of mass surveillance into people’s communications and activities – worries me. His desire to root out factionalism is the right way forward but he was also the architect of Labour’s terrible Brexit policy. Meanwhile, his London colleague Emily Thornberry, has a good record of holding Boris Johnson to account as shadow foreign secretary, especially on issues like Yemen and the imprisonment of Nazanin Zaghari-Ratcliffe in Iran. But she doesn’t inspire members and is unpopular with the electorate.

Jess Phillips is now out of the race, although her track record of lazy, white-focused feminism had ruled her out for me from the beginning. She’s perpetuated harmful ideas about ethnic minority communities, like accusing British Pakistani men of “importing” wives for disabled sons and delighted in claiming she’d told Diane Abbott to “fuck off”, which makes me sick. She was never an option.

And then we have the only POC candidate standing for leader: Lisa Nandy. (although many are unaware of her Indian heritage). She’s northern which might resonate more with parts of the electorate who feel abandoned. But I’m still not inspired; she’s been praised by Katie Hopkins (even though Nandy denounced her endorsement) and hired a former UKIP and Leave EU data expert for her team. She’s even admitted her dad thinks her views are “too right-wing”.

I’m not any closer to a decision about where to place my vote for Labour leader. When it comes to the deputy leadership election I’m almost spoiled for choice. But the leadership contest doesn’t feel the same.

“This generation of young people growing up want authenticity. We want leaders who don’t just say words but actually act upon them”

To me, it seems as though none of the candidates standing have a strong political history of activism and fighting for the rights of marginalised groups, which Jeremy did, which was why he was so popular amongst people like me.

This generation of young people growing up want authenticity. We want leaders who don’t just say words but actually act upon them. We want leaders who join us in the streets and stand with marginalised groups at all times. We want someone with conviction and empathy. Too many people – particularly those who bear the brunt of austerity and the decisions made by those in the Westminster bubble – distrust politicians. Apolitical people will tell you “they’re all the same”. We need a leader who disproves that and shows care.

I want to feel some connection to my leader. I want someone I can get behind, that I can put my faith in, that I can fight for with pride. And at the moment, none of the people vying for the job have earned that from me.

This is part of the Keyboard Warriors politics column, written by @a_leesha1