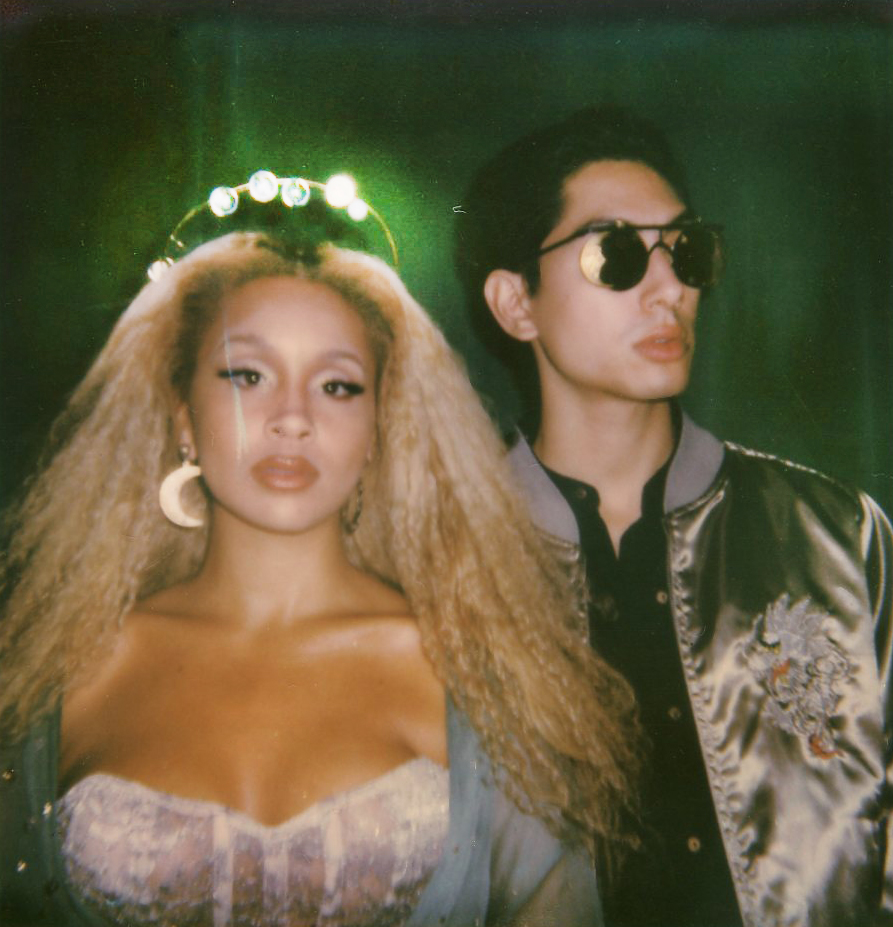 NYC duo LION BABE have become known for their lithe and dreamy dance-pop sounds. Singer Jillian Hervey and producer Lucas Goodman were introduced through a friend in 2012, and put out their giant first track ‘Treat Me Like Fire’ in the same year – since then have been honing their music, from their 2014, Childish Gambino-featuring EP, to their 2016 debut album, Begin (both on major label, Interscope).

But since then, the pair have decided to go independent, seizing control of their narrative ahead of album number two, Cosmic Wind, which dropped earlier this month. It’s an album that brims with breezy neo-soul and disco-lite grooves, and thematically channels the winds of change and transition.

Following the album and ahead of a summer of touring, I had a chat with Jillian about Cosmic Wind, preconceptions about having a famous mother, and whether she thinks the label “alternative R&B” is racialised.

gal-dem: Can you tell us a bit about going independent since Begin? Has it felt markedly different?

Jillian Hervey: Creative control is really important to us as artists. We both realise that by being independent, we now have the challenge of managing all aspects of LION BABE – but it truly has been freeing to take all of the knowledge gained during our label deal and use it to our advantage to make the music and art we envision. Less drama in general.

You get labelled as “alternative R&B” a lot, which I always think is kind of a lazy descriptor, especially with this album. How do you feel about it as a term, and in relation to your music? Like, to my mind, there’s more in the way of pop or low-key disco, house, even soul… Do you think “R&B” just ends up being a bit of a racialised way to categorise you?

We get grouped into all sorts of genres, but that really is the norm. People are always eager to label something a certain name or genre. I don’t think we are too locked in on defining ourselves as one sound. Mainly because we listen to and are inspired by many different elements of different music. If anything we feel our music is rooted in soul. Racially we are a blend as well. We hope that music isn’t judged by what race you are, but if it is, that is also why our sound is unique. We come from different cultures and so the blend of those traits add to our alternative sound.

How does the writing process work between the two of you?

Most of the time Lucas will have a beat or musical idea started and then I will do a freestyle over it, that has little hooks, concepts, melodies etcetera on it and we will listen back and start to create a structure from there. There’s a lot of magic in initial demos, so if an idea comes out and it’s a little incomplete we just go piece by piece to add to it. It can vary, though – we’ll talk about song ideas beforehand also. If Lucas has a sample he’s thinking of trying, that might inspire what I will come in with to sing.

It’s quite a lithe, sexy album – is that an intentional thing?

We are sexual people but are never deliberate in trying to make something intentionally sexy. In terms of where we are in our lives, we like to have fun and feel good about ourselves, so that energy can definitely be considered sexy. We both love music that makes you feel sensual.

Why did you decide to channel Pet Shop Boys on ‘Western World’?

This wasn’t really a preconceived idea, it happened naturally. Lucas and producer Mike Bloom had just made the groove that day, and then I went in to lay some ideas on it. Lucas was humming the ‘West End Girls’ melody along to the track and it just stuck. Once the idea was there it felt so good so we had to keep it. We then flipped the lyrics to reference our modern society. Fortunately, the Pet Shop Boys are rad and they gave us their blessing to use it.

Do you feel like people form certain opinions or preconceptions of you based on your mother being Vanessa Williams?

People form certain opinions and preconceptions of me in general, but that goes back to people always being eager to label something. It’s a mixed bag – I am never one to shy away from being proud of coming from a talented, beautiful, successful mother, but I don’t think her career or journey needs to be part of our story as LION BABE. I always wanted to make art, be independent in my journey and make my family proud. Some people discover us through her and other people have no clue. She is a great mother and always encouraged me and my siblings to follow our dreams.

Can we please talk about that beautiful album artwork? What was the inspiration behind it?

Cosmic Wind is ethereal and magical, so we wanted to incorporate that into the album artwork. We were thrilled to connect with Dana Trippe who shot the cover, and is one of favorite photographers when it comes to visually combining retro and future elements. We had a tonal theme, and the wings just kind of came in naturally. We have them on tour with us, and when we tried it out during the shoot we all knew it had to be the cover. It really drives the theme of growth and transformation home. We love how it is very present but dreamy.

In terms of collaborators – Raekwon, Leikeli47 and Bilal – was there a specific reason you reached to them?

This album was made at home and being from New York we wanted the collaborations to be New York-based artists. The iconic Raekwon from Staten Island (I mean, Wu-Tang!), Bilal the chameleon of soul and Leikeli the fireball of swag and humbleness. They all are incredible artists who we are fans of, but who also have distinctive voices. When we were making the record their voices just popped into our heads and in these cases we’re fortunate enough to be able to reach out and just ask. They happen to be amazing people as well.

What do you want people to take away from Cosmic Wind?

Growing up is non-stop and life is full of unexpected twists and turns. The climate of the world in general is high-energy and anxiety-ridden, so if anything it is an offering of release, calm and rhythm. Hopefully some of the themes we talk about can relate to someone, inspire someone and connect people.