What’s so special about Marie Kondo’s ‘Tidying Up’? 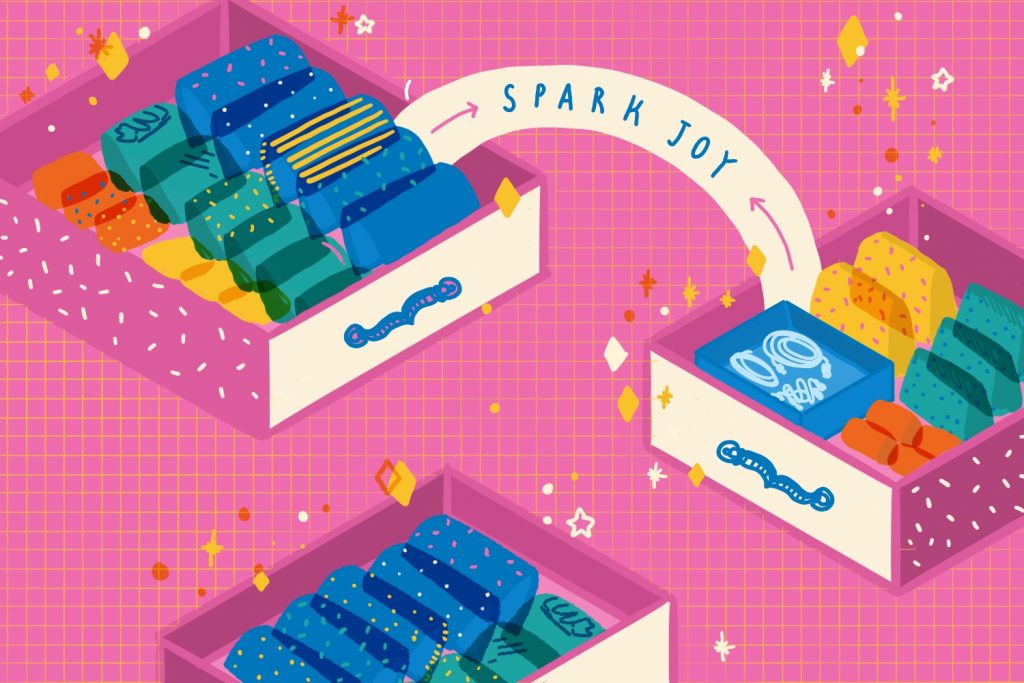 If you hadn’t heard of Marie Kondo before this week, you certainly will have by now. In the days since her new show Tidying Up premiered on Netflix earlier this month, there have been op-eds, hashtags and gifs aplenty, portraying the Japanese organisation guru as everything from a new-age messiah absolving the West of its mindless consumerism, to an austere minimalist, guilt-tripping us all into getting rid of our beloved clothes, souvenirs and books. Books!

Yet while the Netflix show has recently elevated Marie Kondo to meme status, her popularity is not a new phenomenon. Rather, it was in 2014 that she first burst onto the scene with her book, The Life Changing Magic of Tidying Up – a straight-talking guide/memoir that sold million of copies worldwide. After years of obsessing over the art of organisation, Marie’s ethos is that tidiness isn’t simply innate, but rather something we can all achieve with her Konmari method. In a nutshell, for a truly tidy life, one must keep only the items that “spark joy” and then discard all else. It sounds far too simple – a little wishy-washy, even – but through a series of anecdotes, she explains why all other approaches won’t work.

Plus there’s plenty of practical advice too: what to do with sentimental items you can’t quite let go of, how to store the stuff that’s left, and a folding technique so satisfying it’ll have you looking forward to laundry day.

“I’d come to try out every tidying and decluttering trick, but it was Marie’s method that finally made the most sense”

I was instantly sold. If it’s true that it’s the messiest minds that crave tidy spaces, then it’s pretty clear that my long-standing desire for order is a symptom of the various neuroses bubbling under the surface. Still, like everyone I know, I’m prone to keeping my shit out of sight and mind in cupboards and drawers; and while everything on the outside might be clean, clutter-free and arranged at right angles, those little piles of mess often taunt me from their hiding places. I’d come to try out every tidying and decluttering trick, but it was Marie’s method that finally made the most sense. As soon I started to think about what sparked joy, rather than what I felt I ought to keep, had used in the last six months or might come in handy one day, it became a lot easier to whittle down my clothes, makeup and miscellaneous items. The result was less stress, more space and a renewed appreciation for what remained.

Fangirl that I am, when I found out last year that Marie would be starring in her own show, I was thrilled. Is there anything more pleasing to a neat freak than seeing a house full of clutter transformed into a place that’s spick and span?

To my delight, Tidying Up finally premiered earlier this month – deliberately timed for the New Year – as an eight-part series, which sees Marie put her principles into action in homes around America. Among those given the Konmari treatment are the empty nesters still storing toys once owned by their now-adult children; the downsizers with more bric-a-brac than their new space allows; and a young couple clearing out their crap to make room for the first baby. What they all seem to have in common, however, is being unwitting participants of a culture that urges us to accumulate, accumulate, accumulate until we’re weighed down by our own stuff – and have to buy more stuff to stuff that stuff in.

For sheer entertainment value, I’ll admit that Tidying Up is pretty rubbish – as tedious a show as the title suggests. Even for an organising fiend like myself, there’s only so much folding and filing you can watch before drifting off – or onto a better series. Marie of course is wonderful: a softly spoken, quirky character whose habits include greeting the space by kneeling in silence, ‘waking up’ abandoned books with a tap and encouraging clients to thank objects for their service before letting go of them. And her occasional bemusement with American culture, and the small peeks into her own orderly life, make for the more interesting aspects of the show. Otherwise, the format is pretty repetitive: helping average people living in average homes address their average levels of mess. It’s ‘authentic’ and ‘relatable’, perhaps – but that rarely makes for riveting TV.

But that’s not to say there aren’t lessons to be learned from Tidying Up. In fact, I dare anyone to watch Marie Kondo’s show – dull as it may be – and not suddenly feel a little suffocated by the stuff around them. Since reading her book however many years ago, my standards had slowly slipped, but after a few episodes, I was ready to get back to work. Within a couple hours, a bin bag of clothes that I’d fallen out love with was scheduled for a charity collection, off to spark joy for someone else; everything down to socks and knickers were arranged in boxes and lovingly folded into little squares; the miscellaneous drawer that had become home to everything from empty perfume bottles (too pretty too discard!) to recipes ripped from magazines was finally purged of its contents. After my space had been fully decluttered, I even found the strength to overcome “millennial burnout” and tackle the rest of the errands on my to-do list. Such is the life-changing magic of Marie Kondo.

For those who are convinced and finally ready to streamline, frankly, I’d forget the show. It’s certainly not worth the Netflix subscription. Instead, buy the book that sparked the movement in the first place – a light, workable read that will quickly have you Konverted.

Tidying Up is available on Netflix, and you can buy Marie’s book here.