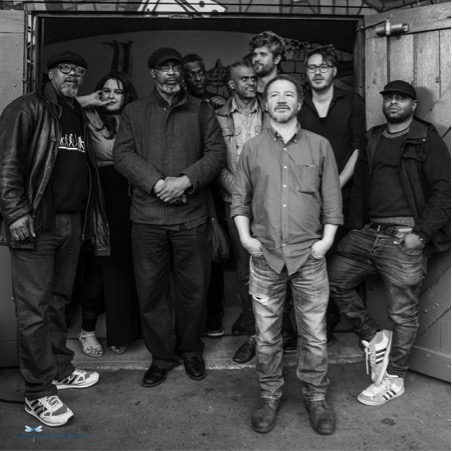 A year after the UK voted for Brexit, its cultural repercussions have been complex and yet, have not reached their full intensity. But what about the consequences for non-white, working class EU migrants? What about for people of colour (PoC) migrants, the most vulnerable group, whose rights are seldom protected? Following the referendum, musician Alya Al-Sultani created Collective X, a group of musicians and artists who are both migrants and PoC. Their upcoming album is the perfect music to find solace in, within the scary post-Brexit world we live in. We premiere their debut single, Take a Moment and speak to Alya about how the band formed.

gal-dem: How would you describe your experience as a migrant woman of colour, making music in the UK scene?

Alya A-Sultani: I felt anxious about this question – which surprised me – but I have to speak my truth. The biggest challenge as a woman of colour making music in the UK is finding an authentic voice.

I also had to deal with internalised racism and making music in a system that does not have me in mind. I used to silence my voice, fearing rejection and moulding myself into something non-threatening.

Finding my rage; allowing myself to not worry about the rejection of the system, has proved the path to finding my voice as an artist. Not only do I no longer value white voices above my own but I have connected with myself and know I have something to say. Not every musician is an artist — artists must have something to say and the means to say it. I have transformed from a musician to an artist.

Being a refugee woman of colour, finding her own way in a white-washed music scene biased towards white success, has been an advantage. It has forced artistic growth in me through the obstacles, rejection and disrespect I have faced.

Brexit inspired you, as you wrote the album right after the referendum results. How did it impact the album?

The whole album burst out of me in 24 hours after the referendum result. It had been writing itself inside me for a year in the run-up to the referendum. The anti-immigration and racist rhetoric that always existed, but was concentrated, […] tugged at old chains around my heart that I hadn’t felt in some time. But the biggest realisation I came to was that we are seen as fair game in the contest of white ideological whims. The fall-out for us was less important than the ideological struggle among different white political camps. We are cannon fodder, even to people on the left we thought were allies.

This realisation left me feeling vulnerable and exposed until I remembered that I have a tribe here, my people, and we need to be there for each other. Collective X is a tribe of like-minded people responding together to minority oppression and the times we are in. But my tribe is bigger than the Collective and I have changed the way I work, the people I work with, the people I support and how I give it.

You said that you’re trying to depart from white-washed music. How are you deconstructing your music?

Avoiding white-washing starts with listening to my authentic voice and thinking about what I want to say with the music, and who I am saying it to – while staying aware of my place in the system. It is also choosing carefully who I make music with. I’ve had bands I’ve disbanded because my voice was drowned out by an aesthetic that had nothing to do with me. I am now making music with the kind of people who constantly remind me to stay authentic.

I don’t owe anybody anything, nor white listeners comfort or security, and I certainly don’t owe white-dominated Western music more reverence than the folk music of Iraq or grime or any other music. Once you see music as a level playing ground, it just comes down to your aesthetic and that is what leads what I do now. It now starts with love and knowing and choosing to make music that sounds good to me. I have learned it from listening to many musicians: Corey Mwamba, Cleveland Watkiss, Pat Thomas, Shabaka Hutchings. Their music sounds like it has that same starting point: knowing what is good and being led by their authentic aesthetic.

Who do you want to reach with the album?

I can’t name it exactly except that I hope it is in aid of justice and equity. The more musicians of colour in the public eye, the harder it is to stereotype us — each of us does a little bit to kill groupism and remind people that we are distinctive individuals.

I have written songs on this album which are for my sisters, for the tribe, for the past and for the future. There’s humour, incredible musicianship, plenty of excellence and kindness – as well as rage and frustration.

Collective X’s first single, Take a Moment, comes out on 9 October. Their album, Love and Protest, will be released on 29 March 2018 with Two Rivers Records. The album launch party will be at Jazz in the Round at the Cockpit Theatre in London on 28 March 2018. They will be touring in the UK and Europe. You can find them on Facebook and Alya on Twitter