Melz on being black in Britain: ‘we are a displaced diaspora in danger of losing our culture’ 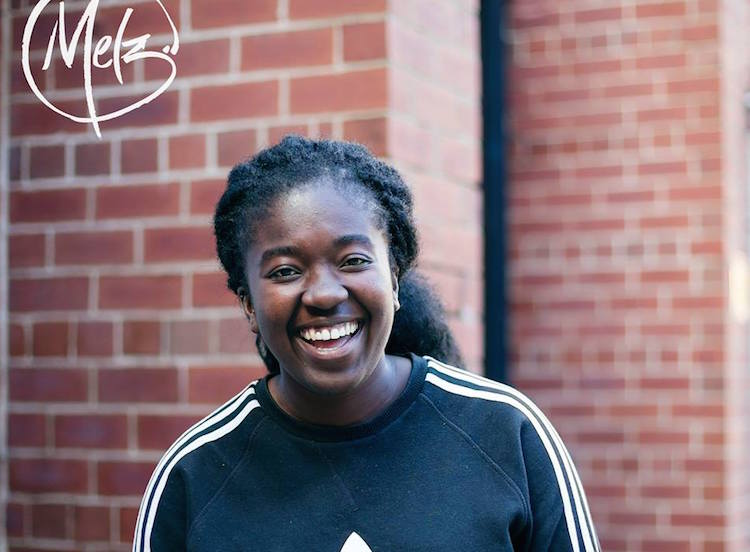 Melz is an artist from south east London, currently completing her masters, tackling social and political thought at Leeds University. Not only that, she is also the education officer working hard to decolonise the University space. She ran the Why Is My Curriculum White campaign and has been involved with the organisation of celebrating Black History Month at Leeds University.

Melz’ aim is to bring conversations to Leeds that once were unimaginable. Melz has just dropped a new track exclusively with gal-dem, so we  thought we’d catch her for a chat about her motivations and aspirations ahead of her performance at tonight’s gal-dem Friday Late at the V&A Museum.

gal-dem: Who do you want to hear the track?

Melz: Black British people really. I guess what I am trying to do with my music is fuse my experience into grime music. I’m trying to encourage the consciousness we are seeing increasingly within the young, black British community.

What was the major motivation behind making the track?

Black British people are continually getting fucked over by the government, by the state, by racists and it’s not a pleasant situation to be in. I wanted to use this song as a way to express that, and so many of the issues that happen to black people, right here in Britain.

When you were making it, did you find that people were agreeing with you? Did anyone tell you, you were ‘too angry’ or ‘too hostile’? And if so what were your responses?

To be honest, I was worried that I was a bit too angry! Whenever I write I just write whatever I’m feeling, and I use a lot of swear words… I thought it was too hostile, I thought it was too angry so I tried to change the hook to “they don’t love us”, something a bit gentler. It was interesting though because both my black and white friends said I needed to stick to the original, because that is the truth of it. My other song is called ‘Fuck Theresa May’, it’s all just very honest and I know it may come back to bite me in the future, but right now that is my truth and I want to live out my truth and I want other people to hear it because it can’t just be mine, it must be other people’s as well.

When did you realise that the system we live is in grossly unfair? When were you ‘woken’ up, and when was the moment when the alarm went off and you realised something was wrong?

The alarm is always going off. I don’t think “wokeness” is a destination, it’s a continuous journey. For me it was when I came to university, I was surrounded by so much whiteness, I didn’t even know what to do with it! So I found refuge in a lot of different ideas and theorists. I had been on such a white western trajectory for so long that whenever I found a reading that deviated from that I was like, “this is the best thing I have ever read in my life!” So when I started looking at stuff like that it really opened my mind. A lot of social media support was going on at the time, pages such as Why is my Curriculum White were popping! It was so great being able to have a conversation that wasn’t always derailed by whiteness. These were spaces where young, British people of colour were coming together and discussing the issues at hand.

It was around my second year of university that I started reading black British feminists, as well as Frantz Fanon, and they changed my world because it spoke to my lived experience in a way that academia never had done.

So, what advice would you give to people who are feeling uncomfortable in their university spaces and predominately white spaces to do? Some people don’t have to tools to know how to deal with these pressures. Of course music is one of your outlets, but what else would you recommend?

I guess just knowing that you’re not alone. I was in the school of philosophy, and my tutor was telling me that every year about two black females come through the school and they always seem to struggle in some way shape or form. So at that point, I felt very alone in that academically. I had to venture out and find my space somewhere else. I tried to find people around me who had similar ideas and interests, I went to places where things were being discussed.

It may be through university societies that you find your support group (although it wasn’t for me). It may come down to you needing to make that space – that’s if you have the energy or the will to carve out your own spaces. I got involved in the student’s union, and I have managed to do a lot in terms of black representation, but it has been hard. I wouldn’t recommend anyone to go and do it, it’s been hard, it’s been tiring and it’s been a headache. But it has meant that I have been able to create spaces for other black people here, well I hope anyway…

You definitely have. So in regards to your music, what would you like to see happen with it? What would be the best thing that could happen with this track?

Right now, I’m just starting out. I’ve got one song out and this is the next one and I’ve written loads others.

Every song I have written so far discusses a political issue, it discusses something that is important to me. I want to do that on grime music, because I think grime is so important to black British culture, it’s so important to me as a person. I grew up listening to it, and it has influenced me so much. So what I want to see with it, is taking myself from this academic space and putting my story with grime, fusing them together and I want to show this new side of grime.

I feel like there is a new generation coming through. Proportionally black British people are the most likely to go to university but also the unlikely to succeed. There are a lot of people who are entering these academic spaces, and having these varied experiences and I feel like younger people are becoming a lot more conscious about the world around them. The inequalities and the shit that is happening all over the world and right here, and I want to give that a voice on grime because I respect the culture so much.

Which one of your songs has the most meaning for you?

Nana Yaa Asantewaa. That’s my name sake. I’m from Ghana, my name is Nana Yaa Owusua. She was a woman who fought British colonial rule in Ghana and when all the man were like “let them just takeover” she was like “nah let’s fight these white people….” That song is all about her, British colonial rule and the strength and power of black women all over the world. That song is really special to me and I’ll be releasing that the start of next year.

How do you view the black British experience?

The black British experience is so particular. We are all living here in Britain but still have a home somewhere else. I’m trying to bring in all aspects of the black British experience, like the Ghanaian aspect, even though I don’t speak the language. For me my language right now is the way I speak. I don’t speak perfect English, but my language is a representation of where I am from. It’s a representation of south east London and black Britain for me. Whilst I may not know my home language  I still know what’s true to my experience through history and learning that.

Check out Melz’s new release from the link below and also catch the artist herself perform live this tonight at gal-dem’s V&A takeover where she will be headlining the MC Corner 20.30 – 21.30.