Nasty Women: the essay collection that gets intersectional feminism right 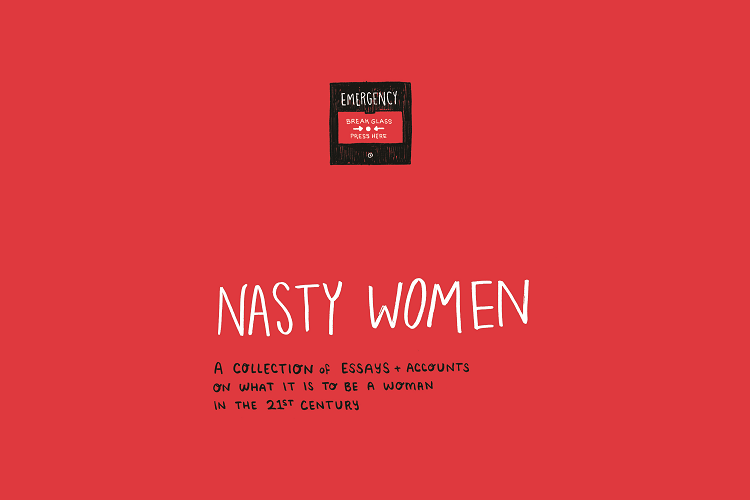 For a great number of people, resistance has a particular sting to it when expressed by women. Whether or not that resistance is voluntarily visible through protest and politics, or involuntarily visible by way of race, gender or one’s physical abilities, making one’s presence known as a self-defining woman can be enough to provoke anger from those who believe that the privilege of free speech should be enjoyed exclusively by cisgender, white, heterosexual, able-bodied men.

Nasty Women, a new collection of essays from independent publisher 404 Ink, captures a wide-ranging chorus of women’s voices from across the globe in the Donald Trump era, with subjects ranging from women’s healthcare rights, body image, intersectional feminism, rape culture, and the importance of internet activism.

Ahead of the book’s release, 8 March 2017, we talked to two of Nasty Women’s featured authors – writer Jona Kottler, author of Fat in every language and director and writer, Jen McGregor, author of  Lament: Living with the Consequences of Contraception – about reproductive rights, body positivity and the general commoditisation of women’s suffering.

Written loosely in the style of a lament, Jen McGregor’s essay compares her experience with using the contraceptive Depo-Provera (Depo), an injection taken at 12-week intervals that subsequently gave her osteopenia (a bone-tissue reducing condition), with that of an abusive relationship.

“It’s ridiculous to long for you when I think about what you did to me. You broke my heart and several of my bones”, she writes.

“Shall I give you the full list? My coccyx, my sacrum, my pelvis (in five different places), one of my lumbar vertebrae, a couple of toes and my scaphoid. (It’s a small bone in the wrist. That one hurt more than all the others put together.)”.

gal-dem: Your use of Depo-Provera lead to being diagnosed with ostopenia, and resembles an abusive relationship of sorts in your essay. What made those two things comparable in your mind?

Jen: Essentially that’s kind of how it feels, I loved Depo in the early days, I really did. It felt like one of those very intense relationships you can find yourself in with people who are very bad for you, but you don’t ever really stop missing the good bits, the highs. Since I got sterilised and my menstrual cycle kicked back in, it’s gotten worse every month, and there is a part of me that is tempted just to go back to the doctors and say: “yes, I know this destroys my bones, I know it has all sorts of unpleasant effects on me, but let’s go back to the injection shall we?” Because at least then, I didn’t have to worry about all of this.

Last year, a trial for a male contraceptive injection was found to be effective but was halted when the risks (almost identical to the pill) were found to outweigh the benefits. Why is women’s suffering almost universally accepted as a necessity?

I think it’s linked to centuries of us being considered the weaker sex, being seen as hysterical. It’s tied to all the same things that people used in arguments against giving us the vote, you know? We’re just seen as somehow, slightly lesser.

I think this is where in some respects, we’re at a very difficult place, because we’ve come such a long way over the 20th century in terms of getting closer to equality that now there are a lot of people who think: ‘well now that problem is sorted’.

You knew you wanted sterilisation from an early age – why do you think you were met with such resistance when you shared this with healthcare professionals?

Sterilisation was the option I wanted from as early on as I’d ever heard of it. I’ve always known that I didn’t want children, and when I was 17 I found out that it would be very unlikely for me to conceive naturally or carry to term, so I just thought: okay, let’s avoid the possibility of ectopic pregnancies, miscarriages, all that kind of thing and just shut the whole thing down right now. So when aged 18 I asked for the procedure and was told “no, you’re far too young, you can’t make that kind of choice” – I could kind of see that they had a point, but it confused me that I was considered ‘too young’ to decide things about my own body, yet old enough to mother a child.

Did that discourage you from seeking the contraception that you wanted?

I kept going back. When I was 25, I finally found a doctor who referred me to the gynaecology department at my local hospital, where I was comprehensively shot down. I turned up for that referral and the doctor basically said, “no, you will want children eventually, go away”.

Why do you think there’s such a disregard of personal choice when it comes to women’s reproductive rights?

What made you choose to focus on this subject in particular as your contribution to Nasty Women?

I’ve written about this in bits and pieces before on my own personal blog, and elsewhere, but I wrote this specifically for Nasty Women, because the book’s title ties it in to what’s going on politically at the moment. I find it very worrying to see a very conservative politics arising and the kind of borderline theocracy that America seems to be hurtling towards, and we’re potentially not far behind that in the UK.

But there’s a particularly worrying argument that I’ve seen made quite a few times, and it was made to me personally a few times when I was on my journey to sterilisation. Essentially people saying to me that I need to have children because I’m white, because we’ve got to “out-breed the other races”.

The idea that Britain and America have got falling birth rates in their white populations, and that the onus is on women like me to somehow do our duty and reproduce for some kind of greater good, I cannot get on board with that line of thinking at all.

There are already issues with women of different ethnic backgrounds being treated differently when we want birth control.

One of the best things about Jona Kottler’s Fat in every language, is the poeticism with which she, a self-identifying fat woman originally from Albuquerque, New Mexico, commands respect. “I cannot define value by the amount of space I take up in a given moment, I cannot speak to myself in that language anymore”, she concludes at the end of her essay, which delves into her experience of being fat in various cultural settings, as well as the ranging severity with with society chastises fat bodies.

Discussing the significance of language where her body is concerned, Jona explores what it means to be fat in various tongues. She was nicknamed Juanita Gordita (Little Fat Jona in English), by her Mexican grandmother, and also recalls what it meant to refer to herself as fat in French: “fat is a continuing condition […] a condition as unchangeable as where I was born or the colour of my eyes […]  And French, I have to tell you, you’re right. Fat is who I am: to people who haven’t met me, (‘the bathroom is over there, next to that fat lady’) to people who know me, (‘you looked so good when you lost that weight’); even to myself”.

gal-dem: My mum is Jamaican, and it’s very normal for people from our culture to comment on people’s weight on a regular basis. How did you deal with that level of candidness when you were growing up?

Jona: There might be cheek pinching in a playful way, for example, but your inner-self does not receive it like that. But it’s one thing to have your grandma call you [Juanita Gordita] and know she loves you, and another to have a stranger talk about your body.

What impact did your grandmother’s remarks have on your relationship with food?

My grandmother would make a million tortillas and they’d be all stacked up around the counters. It was like your drug dealer judging you for being a drug addict. She was the one making the food, but she was judging me for eating it.  I remember taking them and hiding to eat them. I would put one under my shirt and walk away with it so that I could eat it by myself because I didn’t want to be watched.

I don’t know if you do this but if I’m in a restaurant and we’re eating something communal, I look at the skinniest girl and put that much on my plate, wondering whether I’ve exceeded my share.

I have. Which is why it’s so ridiculous that people assume that fat people don’t know how they look or what they should be eating.

[addressing said people] Oh I should be eating salad? Wow. Until a stranger brought that to my attention, I’d never heard of it. I pour syrup on my salad, I don’t see what’s wrong with that.

Oh you’re not supposed to do that?

Hypervisibility can be a daunting thing to have to deal with in a variety of ways. As a fat woman, why do you think people feel the need to educate you on your own body?

It’s fascinating, isn’t it? You don’t know if it’s coming from a place of kindness or cruelty. But they do have this idea that you have gone through your whole life living in your body and never received any health advice. It would never occur to me to tell someone how they should be in their own body, it’s hard enough to be in your own body, much less to be able to tell other people what to do. But it may actually come from that, right? It’s hard enough to be in my body, I’ll just tell other people what to do with theirs.

The reality is that if you’re overweight, you probably know.

Nasty Women’s title draws on Donald Trump’s attack on Hillary Clinton during the final presidential debate. What do you think of your new president?

It’s awful. I remember visiting the UK when Bush was president, and feeling ashamed. Now I’m just shaking my head going: how ridiculous, how awful, not just that there’s that whole surge of terrible nature in my country that is dancing around and happy and proud that they get to say whatever they feel like now, but I think about all of those women who voted for him. White women. I just want to go home and shake them. What were you thinking? How did you think that this would be a better choice for you? How did you internalise that hatred of another woman to the point that you chose the worst possible choice for yourself?

What do you say to people who tell you that being happy in your own skin is an offence?

You kind of go through these phases where you say, well, I appreciate your opinion, or: it’s a complicated issue, and then at some point, you just go: “fuck off!” Because you know that your reasoning is falling on deaf ears anyway, especially when someone thinks that the solution is putting your fork down, when it’s infinitely more complicated than that. Sometimes, you just say: “okay, I’m going to try again”. It’s a little bit like the election. Some days you want to give up and hide and some days you want to march and you have to just allow yourself the room to feel all those things, and to do what you can to say: here I am, I get to be here.