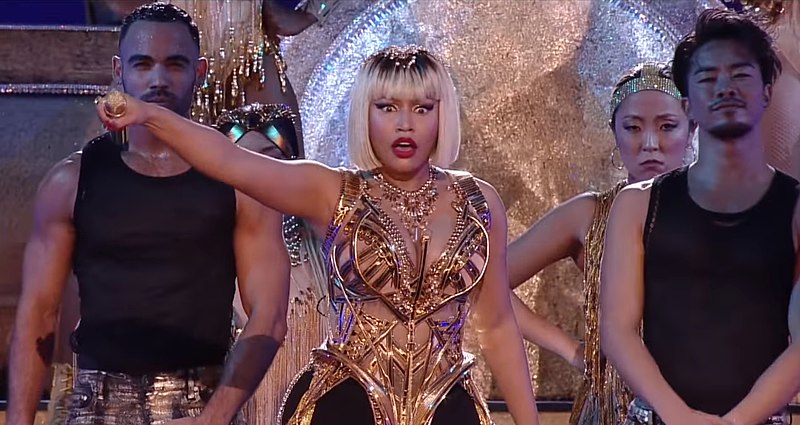 With 40 hours of Spotify playtime and four songs making up my top five, Nicki Minaj was my most listened to artist of 2018. I have a storage box filled with Nicki Minaj fragrances, shirts emblazoned with her face or lyrics, imported magazines from her pre-debut days and a memory box containing ticket stubs from the numerous concerts and festivals I’ve attended solely for Nicki over the last decade. In short, I guess you could say I’m a pretty big fan – once I would’ve even called myself a stan. So, when I say this comes from a place of love, I mean it: Nicki Minaj, I really used to admire you.

But even if I look past the lacklustre music videos (the ‘Bed’ and ‘Barbie Dreams’ videos anyone?), the agonising Queen rollout, that embarrassing Twitter rant, and the seemingly never-ending drama surrounding her and Cardi B, there are some things I can’t ignore. Consider, for example, Nicki’s newfound friendship with rapper 6ix9ine –  a child sex offender who pled guilty to using a 13-year-old in a sexual performance in 2015. Minaj has been quoted as calling him her “baby” and has said, “when I know somebody, there’s nothing you can tell me about [them].” Those don’t sound like the words of a woman who is actually on record saying she thinks people who hurt children should be stoned to death in public. The woman who spoke so earnestly about opening a “Nicki Minaj YMCA” on her second album, surely can’t be the same woman cosying up to a man convicted of child sex abuse without so much as a one sentence statement explaining her actions. But she seems to think it’s funny and that all criticism levelled at her is simply just playing into this bizarre “Bad Guy” shtick she’s developed this past year.

When I first discovered Nicki I fell in love almost instantly. The song was the ‘Freaky Girl’ remix: a ludicrously lewd ode to sloppy sex and a song I had no business screeching out the lyrics to at that age. In a short space of time my iPod shuffle was filled with her mixtapes and features. I prided myself on my ability to mimic Minaj’s quick, punchy raps without flaw – actions, voices and cartoonish facial expressions included. Everything about her enthralled me: the way she could go from sickly sweet to gritty grunge on one song; or effortlessly keep up with her male counterparts; and, most importantly, her strong views.

As much as Minaj has shirked the “feminist” label over the years, not even she denies that she does have natural feminist leanings. Take her now infamous “pickle juice” rant, succinctly defining gendered workplace dynamics for an entire generation; or how she displayed intersectional prowess when discussing how sexualised hip-hop videos are more heavily criticised than events such as the equally sexualised Victoria’s Secret show. Minaj was everything I wanted in an idol and more. The more I listened to her music and her message – the way she unabashedly stood up for herself, worked hard and took what she deserved – the more I wanted to emulate her. Even when she has done or said things I haven’t agreed with, they’ve never touched the core of her character before. The Nicki Minaj I loved was always there, bubbling under the surface, reassuring me that I’d put my faith, love and money into a good person. But I don’t see her anymore.

At this point, I’ve tried to distance myself from Nicki. I’ve muted her name and unfollowed her on all socials, as if she were my ex and not a celebrity I’ve never met. I need to separate the person Minaj has become with the person from my memories if I want to keep this one-sided relationship going. For a while, this little plan of mine works just fine and I can forget all the madness she’s done and go back to pretending like it’s 2010 and Nicki is still the best Nicki she can be. And then I have to go and ruin it by checking her Instagram feed.

There, in full glory for the world to see, is Minaj pressed up against a man. It doesn’t take long for “stan Twitter” to discover who he is; Kenneth “Zoo” Petty a convicted sex offender who also served seven years in prison for manslaughter. When the inevitable backlash came, Minaj played into it, ignoring the fact that this is the second sex offender she’s been linked to , and seemingly taunted concerned fans, going so far as to post a photo of her wrapped around Petty on Instagram captioned: “Oh they wanna talk? Let’s give’m smthn to talk about.” . When confronted on Instagram, Minaj responded with: “he was 15, she was 16…in a relationship. But go awf, internet. Y’all can’t run my life. Y’all can’t even run y’all own life.” As if, sadly and horrifically, people aren’t raped in relationships every day. As if Petty’s age and alleged relationship status negates the fact he was convicted of “using a sharp object” to commit the crime. As if that response means absolutely anything in the grand scheme of things.

This isn’t to say Minaj should be held responsible for 6ix9ine’s or Petty’s crimes, because she shouldn’t – women already have a long history of being blamed for the faults of men. But she should be held to task for  treating such serious, heinous crimes that sadly have affected many of her fans like a huge joke, for taunting those same fans for speaking out in concern about her actions, for disappointing a generation of young people who looked up to her as someone with sound morals who truly cared about women and children.

In ‘Hard White’, Minaj raps “my legacy can never be undone” and she’s right – nobody could possibly take away her record breaking accomplishments and everything she has achieved. But while it won’t be undone, it can most definitely be tarnished. Unless something changes soon and quickly, I worry Nicki Minaj may have reached the point of no return.