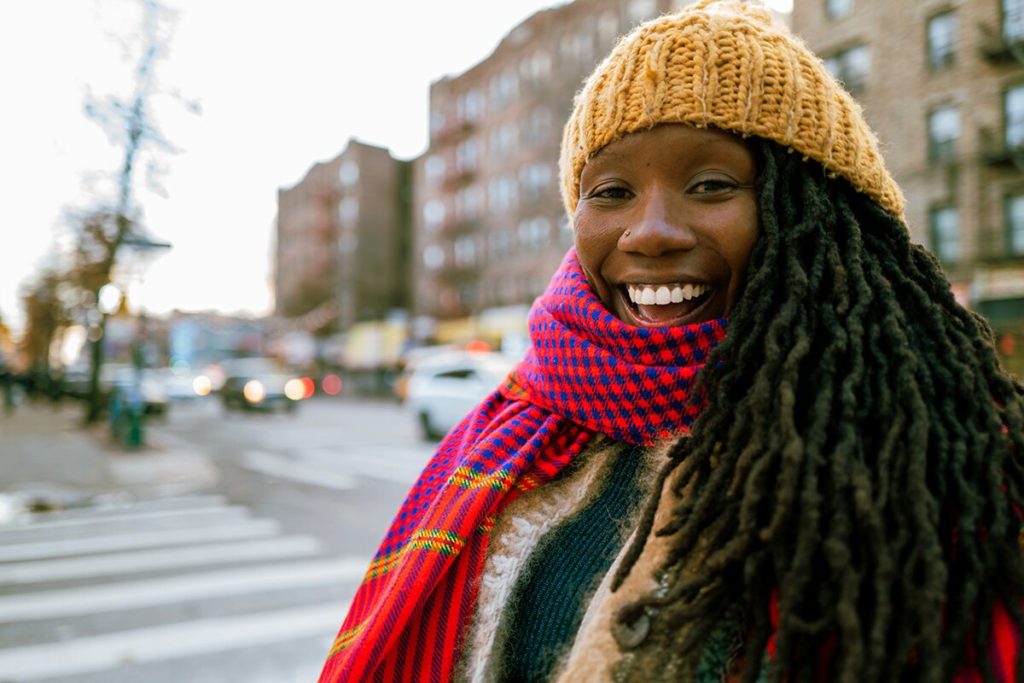 In her latest book, Patsy, the author tells a story that mirrors her own: of a woman who leaves Jamaica seeking a new life and love in New York City.

Nicole Dennis-Benn answers a lot of my questions about her new book, Patsy, before I’ve finished asking them, nodding her head enthusiastically. We’re sitting in the high-ceilinged, book-lined room of her publisher in a part of London where all the houses could be sets for period dramas. Nicole, who favours brightly patterned jumpsuits, maxi dresses and much jingling silver jewellery, seems to have the rare ability to make herself seem at home anywhere, and in turn, make everyone in her presence feel at home too. But, as her latest novel isolates, not everyone is able to hold up this façade so easily.

Her work first caught the hearts of readers with her startling, Jamaican tourism-themed debut Here Comes the Sun in 2016. Now she’s back with Patsy, a book about migration which has a moral thread which ties back to her own experiences of moving to the USA.

Patsy hangs on the weight of personal freedom – and freedom of movement. Telling the story of the eponymous character and her young daughter Tru, it begins with Patsy’s decision to leave her child behind in Jamaica, and start a new life in America as an “undocumented” migrant. Although she is hurting her daughter with her decision, her choice is treated with respect. In love with her former classmate, the ocean-eyed Cicely, Patsy is willing to cross the sea for a chance at happiness with her, to a place where she sees economic opportunities beyond the “concrete ceiling” of Jamaica, where working-class women have few chances for success. “America, like the UK, is sold to a lot of Jamaican immigrants as a fantasy land,” explains Nicole. “You’re gonna go there and you’re gonna do so much better.”

In our interview, Nicole owns her opinions with enviable confidence and a few days before we meet, on stage at Brixton Library in south west London, at the height of summer, she is effusive. It’s her first time in the neighbourhood, and the local crowd, mainly women who reflect back at her with their twisted locs and brightly coloured clothing, are completely in her spell. She calls out to her old friends from St Andrew High School for Girls in Kingston, who are sitting in the back of the audience. She hasn’t seen them in about 20 years. They let out a big whoop.

Later, I catch them to ask them what they thought about the book. For both of them, as Jamaican immigrants to the UK, it resonates. “Even if it hasn’t happened to you, you know someone who it has happened to. So it’s quite a personal story,” says Cheryl Bucknall. “I think anyone who has either lived in Jamaica, or even if you’re the child of an immigrant, you can relate to some parts of the story.”

Although Cheryl describes Nicole as being “an integral part of the class” and social butterfly, her other friend, Gaynor Brown, remembers Nicole as “kind of reserved”. “We both started in 1A, it was called,” Gaynor says. “We were the A group. From 1993 all the way up to 1998 we were together. We were typical innocent high school girls. We’d talk about various things. Girly things. To be honest, I didn’t think she’d become a writer. Genuinely. That’s one of the questions I’m going to ask her – when did she realise that was her calling. She was always lovely. Some evenings we used to be on the phone together, talking.”

Nicole still exudes loveliness, intelligence and compassion. During our interview, this is realised in her dialogue on tactility. “I’m a PDA person, I love rubbing my wife’s back, I love holding her hands, I love kissing her,” she says. But in Jamaica, much like her titular character Patsy, she isn’t always afforded such freedom. “Jamaica is not at that place yet where people can have those open relationships because it’s one thing for people to know that you’re gay but it’s another thing for you to be in a relationship in public,” she explains. “Even though that person might not be doing anything to you physically, the look on their faces is enough. The low growl or groan or ‘Lawd Jesus’ or kiss teeth, that’s enough to pierce my heart.”

Although she has now found spaces in Jamaica where she can comfortably exist with her wife and they became the first lesbian couple to be married there in 2012, the LGBTQI+ community in Jamaica is still fighting for their safety. Homosexuality is illegal and at the end of 2018, a fire burned down the Kingston offices of the Jamaica Forum for Lesbians, All-Sexuals and Gays in a suspected arson attack.

It’s clear that Patsy has also given Nicole the chance to reflect on those early years of moving to America and getting to grips with her lesbian identity. She started journaling when she moved to the country at 17, writing about her thoughts and painful assimilation experiences, much of which she drew on for the book. “That stopped when my step-mother discovered the journal and she saw the writings about the women I was in love with and she’s like ‘oh my gosh like you can’t be living under my house’,” Nicole nods. “Luckily my dad didn’t believe her.” Homophobia for her, she explains, is not “the man wielding a machete or the person threatening to rape you or kill you”. It’s the microaggressions. It’s the feeling of having to “close up” in Jamaican neighbourhoods. “I’m very Jamaican, but I’m also very gay and I’m also very free. I don’t like compartmentalising.”

Even so, Nicole, who moved to Brooklyn in 1999, quickly found that the country “didn’t match up to the pictures or the big grand gifts that we got back home”. She had seen photographs of beautiful cars, piles of snow and had been the recipient of pretty shoes and clothes. The reality was that her dad, who had sent for her, was hustling hard as an immigrant taxi driver, not getting back to his apartment until 4am. “I wanted to really show that painful process of assimilation and also the loneliness that comes with it as well,” she explains of Patsy. “In those critical years, especially the first year, it was like going through puberty all over again.”

Though, in part because of her sexuality, Nicole thinks she would have still made the choice to come to America, reading a book like Patsy before she had arrived would have made the journey a more mindful one. The book doesn’t hold back on its long, grim descriptions of Patsy’s life without legal status – working as a waitress in a hipster Caribbean restaurant and caring for white people’s babies while she struggles to strike up the courage to call her own daughter. She can’t engage in her life there as fully as she once imagined for a long time, and meanwhile, her relationship with her daughter Tru is deteriorating because of the lack of contact.

Tru has become less than a “barrel child” (a common term for Caribbean children who are left behind and often receive “barrels” of gifts from family living abroad) as Patsy makes no effort to communicate with her, sends no gifts nor money. “I go to therapy in Brooklyn and my therapist was saying that the people that come to her the most from the Caribbean are actually people who were abandoned by parents who came to the United States or migrated somewhere else,” Nicole explains of Tru’s trajectory in the novel.  “[Children that were left behind] have a lot of separation anxiety and also detachment based on what happened to them, a parent leaving.”

This separation feeds into the significant struggles Tru has with her mental health, a comment, Nicole says, on the fact that these issues often get branded in Jamaica as “uptown” problems. “As though only a certain class of people would be frivolous enough to have problems like that. Not like this girl who’s in a working class family household and she can lock herself in her room and do things to her body because she’s trying to cope with certain things going on inside. I wanted to put that on the page because it happens more than we know.”

The generational trauma in the book runs deep. While Patsy’s removal is physical, Mama G, Patsy’s mother, leaves her daughter to enter God’s arms. Nicole unpacks how this transition into Christianity has affected Jamaicans in Patsy. Her take on the intense religiosity of some Jamaicans is damning. “[Christianity is] terrible. That’s what trapped us mentally, spiritually, emotionally,” she says, ruminating on Mama G, who abstains responsibility from caring for her child in favour of worship. “I feel like that’s just another way of colonising us, for real. We were given the master’s religion. That’s not our religion. I feel like especially within our black bodies, our brown bodies, it was something that was designed to enslave us.”

Alongside Christianity, much like Here Comes The Sun, Nicole’s new book is also a damning indictment of colourism. Cicely is the most tragic character in the book, but she’s also given an immense amount of privilege because of her light skin and eye colour. “When Cicely chose Patsy as a friend, Patsy felt special because here she is finally being seen by a girl like that,” Nicole explains.

On a personal level, Nicole remembers how she used to see teachers abuse darker-skinned children, and how it impacted her on all kinds of levels. “I used to police my body because, as a darker-skinned black woman, if I wear a nice pum-pum shorts it’s like ‘oh yeah there’s the slut walking down the street’ but let an uptown brownin’ wear the same pum-pum shorts and it’s like ‘oh woah brownin’, slay’,” she chuckles. “I’m trying to wear my short shorts as much as possible and not care because those are the things I think relearning how to be as black women in society, especially in a colonised society.”

Since it was released last summer, Patsy has been named by six publications as one of the best books of the year, longlisted for the Aspen Words Prize and shortlisted for the PEN/Faulkner Award for Fiction. Following her on social media, you can see she has travelled all over the world with the book, but that she always goes back to Jamaica. “Jamaica is still my heart,” she says. “My hope is to run a writing workshop there because I want to give young working class girls the tools to write… I want to hear those girls’ stories. Instead of having people tell it for them, give them the pen and paper to write in a way that people would want to read it.”