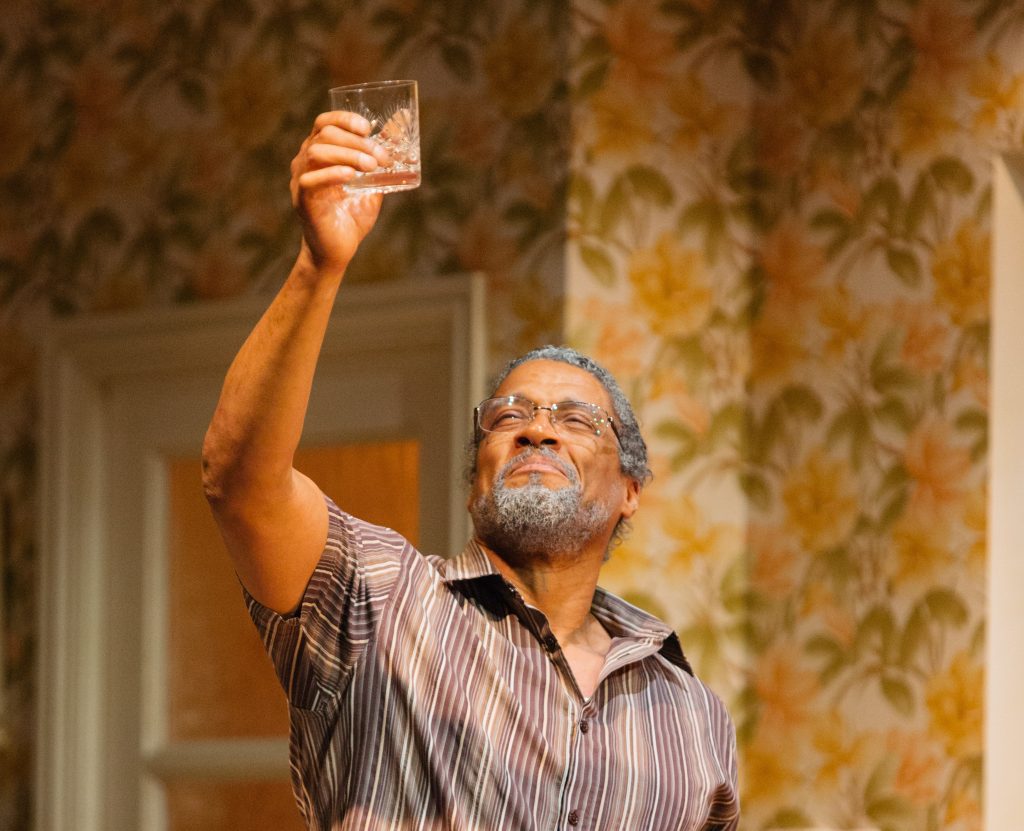 Nine Night follows one family as they deal with the loss of their beloved mother, cousin and friend Gloria. After months of being cared for by her daughter and granddaughter, Gloria sadly dies of cancer. And soon after, her loved ones descend onto her house for nine long nights of mourning through music, dancing and drinking.

Nine nights is the traditional way Caribbeans grieve after a death. Family and friends come to the house of the deceased and sing hymns and celebrate their life. But Lorraine, Gloria’s daughter (played by Franc Ashman) is struggling to find closure in this wake, as family secrets are slowly revealed.

2018 has already been a brilliant year for black British theatre. From Black Men Walking to Hashtag Lightie, great new work has been hitting the stage. Since the sell-out run of Barbershop Chronicles, we’ve been hungrily waiting for more diverse plays from the National and from British theatre on a larger scale. There’s a real yearning for inclusivity and for stories that reflect that. Nine Night goes above and beyond to bring us a well thought out and nostalgic tale.

With a set that transported me back to my childhood, miraculous detail was given to create an authentic British-Jamaican home. From the lace curtains to the frosted doors and the sweet smell of soup wafting in the air, within seconds you’re not in a theatre anymore – you’re in Gloria’s home. Her house is more than four walls, it represents her life, her death and her family.

“Black Brits, Caribbean Brits, are a part of the tapestry of this country and Natasha Gordon delicately shines a light on this through one family’s story”

Natasha Gordon manages to shove a wealth of critical topics into just 1 hour and 45 mins. From the British identity and what that means for Caribbean immigrants, to the power of black economy, interracial families, absent fathers, religion and spirituality and the family secrets that lurk in awkward silences.

With the current horrific mistreatment of the Windrush Generation, Nine Night couldn’t have come at a better time. Black Brits, Caribbean Brits, are a part of the tapestry of this country and Natasha Gordon delicately shines a light on this through one family’s story. These are the forgotten tales of our elders, our families spanning over generations in Britain of people who helped build this country and are now being spat back out. The exploration of black-Britishness is so needed right now.

Nine Night is loud, it’s funny and it’s about coming to terms with death head on and even more importantly coming to the realisation that your loved ones aren’t perfect. Intergenerational family dynamics and the occasional malfunctions of them are a constant undercurrent in the play; Gloria’s younger children are still struggling to see eye to eye with their eldest sibling, who was left to grow up in Jamaica. It explores what having a family split over the Atlantic Ocean is like and how death has the power to bring people together. 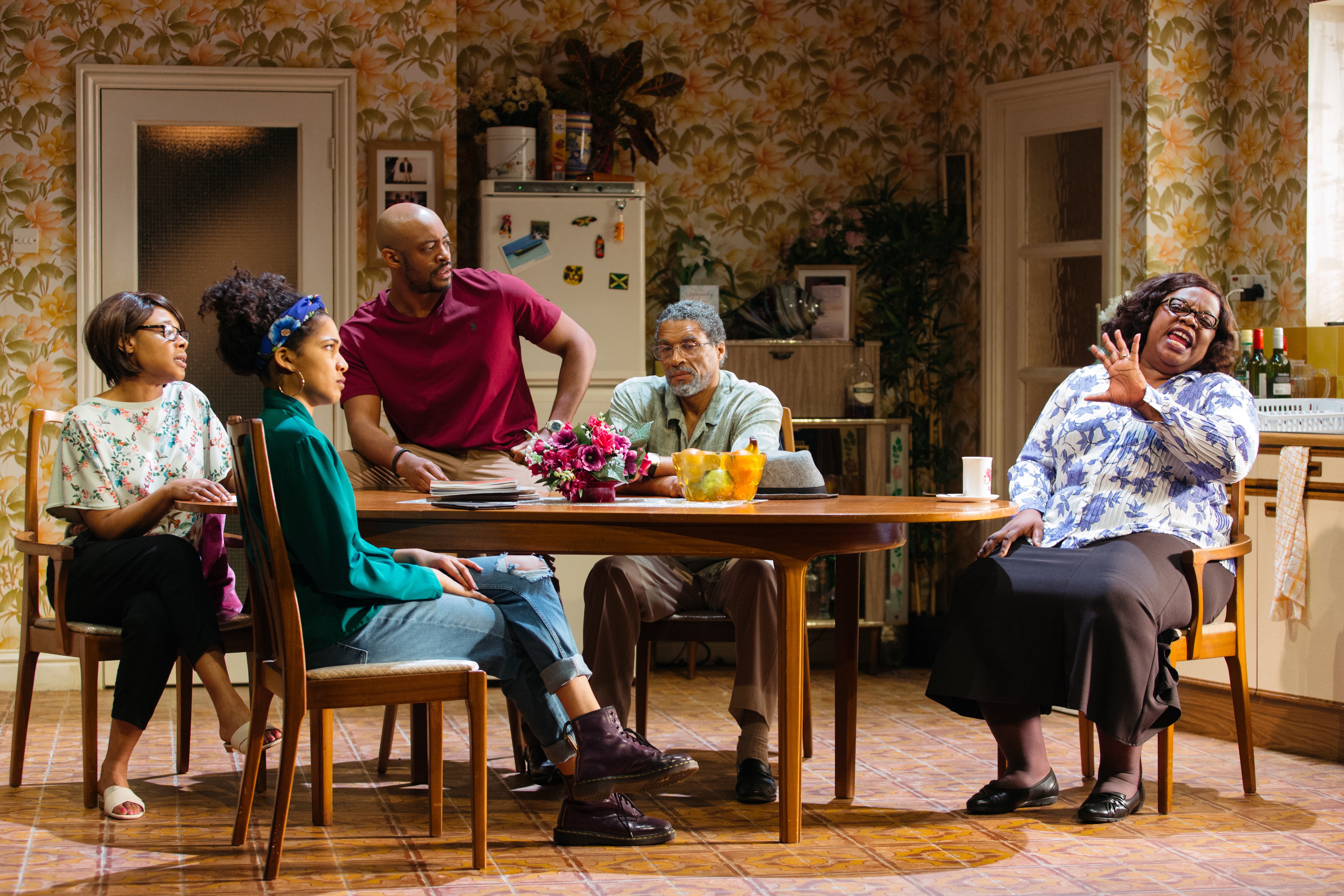 The script is beautifully and carefully written with a timeless plot. But most notably it was refreshing to see Gordon hasn’t shied away from using authentic patois to appeal to a wider audience. If you knew you knew. The performances were spectacular, especially from Cecilia Noble who played Aunt Maggie (pictured above, far right). Every British-Jamaican has an Aunt Maggie. She’s God-fearing, loud, nosey and a jukebox of Jamaican proverbs and psalms. But Franc Ashman’s portrayal of Lorraine was truly touching, the unappointed matriarch struggling to cope with her mother’s death and her family’s approach to mourning.

The notion of dealing with death in Caribbean communities is very different from the sombre and quiet way deaths are commonly approached in Britain. There’s this comforting connection with the dead in Nine Night. An intrinsic part of Jamaican tradition is the belief of spirits, rituals and superstition and it’s laced throughout the play. Gloria is ever present throughout, both through the stories from her family to her recurrence in their dreams.

The audience cried with laughter and just as quickly felt the heart-wrenching pain of loss – something we can all relate to. Nine Night took us through a grieving process. With the drama of a good British soap opera and the love and care reflective of real-life families, we too were invited to sit in and celebrate the life of Gloria.

Nine Night is the play I didn’t know I needed. It’s so unexpectedly moving that long after you leave the theatre you’re left reflecting on your own family and lost loved ones. It’s uncles sipping straight Wray and Nephews, it’s preparing the chicken with your sister, it’s dancing to Elephant Man it’s arguing, it’s laughing, it’s praying. It’s therapy.