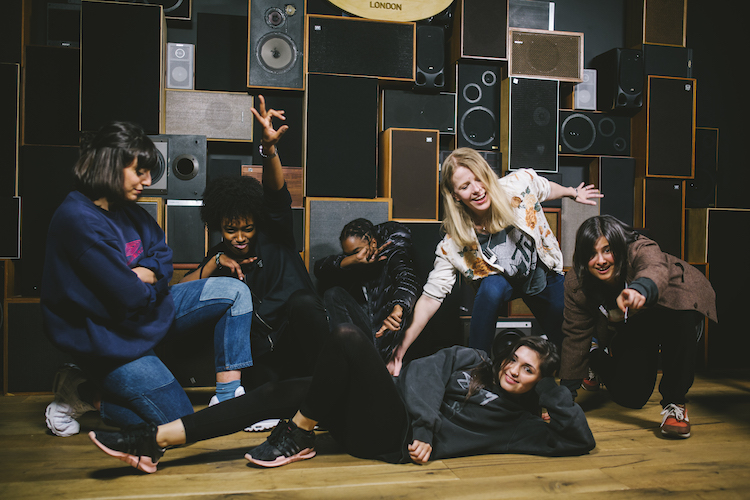 When we think about popular music, we are inundated with names of successful women, be it Beyoncé, Rihanna or J-Lo. But when it comes to sound engineers, producers and DJs, the first image that comes to mind is rarely that of women. Why, you ask? Because, predictably, these areas of the music industry have been historically dominated by men. Although the face of the music industry seems at first glance to be female, the cogs that keep the industry machine running are still overwhelmingly male. To even try to find the statistic regarding female sound producers and technicians is difficult; according to Women’s Audio Mission, only 5 per cent of people creating sound and media are women. Other estimates have been so low that some have even questioned the point in mustering up such a negligible statistic. This has critical implications for the music industry, as it seems to be, on the whole, made, packaged and processed by men.

So that’s why, when I went to Red Bull Studios monthly workshop (run exclusively by women) it felt like a breath of fresh air. #NormalNotNovelty focusses on creating a space for aspiring female producers, DJs and sound engineers at any level. It is these types of spaces that are key in opening out and addressing the gender imbalance in the industry.

“It’s not about excluding men, but by celebrating the women who have already established themselves as DJs, producers and engineers.” – Madam X

“I know so many aspiring young women who want to learn how to DJ and produce but the stigma surrounding the electronic music scene as being ‘male dominated’ can intimidate and sometimes discourage them. It’s not about excluding men, but by celebrating the women who have already established themselves as DJs, producers and engineers. In these workshops, we’re hopefully encouraging and motivating more women to pursue these roles,”  says Madam X, who ran the DJ workshop with Emily Rawson. Emily Rawson DJs for some of the biggest names in the music and fashion industry, and runs her own successful club night of 90s throwbacks and bops, Supa Dupa Fly.

“There isn’t anything else like it that I’m aware of. It’s important women like myself can get up close and personal with up-and-coming female DJs.” – Emily Rawson

What struck me most about the event was the intimacy of the workshops, as they allowed the participants to fully engage with prolific artists in their field, artists who once were in their position. “There isn’t anything else like it that I’m aware of. It’s important women like myself can get up close and personal with up-and-coming female DJs. I would have loved to do something like this 10 years ago.” Emily Rawson.

The three workshops for producing, engineering, and DJ craft had an overwhelming spirit of inclusivity, with each of workshop leaders focusing on the importance of sharing their knowledge in open conversation. Speaking to musician TĀLĀ, it’s clear that she felt similarly. “It’s less alienating to ask a question [when the workshops are run by women] or to be like, she did that and it was kind of cool; maybe I’ll try it. I think that’s really encouraging. We should, as women, support each other… We should be giving and we should share. That’s actually one of the reasons I did this drum kit recently for my FACT Against The Clock. I compiled a little drum kit of sounds I created on my travels, and it was so fun for me to do because I thought: some of my favourite producers have shared their sounds that they had put on sick tracks that they’d made. Why are you gonna be so protective over your shit? What are you scared of? Share. We need to be together, and we need to support each other. Girls should support girls.”

The setting for TĀLĀ’s production workshop was similar to her FACT Against The Clock challenge; she showed us her deft production skills in real time. However, in stark contrast to the easy, relaxed atmosphere of the #NormalNotNovelty forum, her FACT video was saturated by irrelevant tips by male producers who seemed compelled by the need to educate her via the comment section. One comment, in particular, seemed to summarise the problem: “Be honest lads, you slipped into judgment mode as soon as you realised that you were watching someone make music who wasn’t a man.”

“But why is a female music producer a novelty?” – TĀLĀ

If all it takes is for a woman to produce music on camera to provoke such vitriol, then this only proves the necessity of events like #NormalNotNovelty. These events are vital to start to bridge the vast gap that women face in the music industry, the gap between established male super-producers and apparent “shocking” novelty of the mere sight of a female producer. “But why is a female music producer a novelty?” TĀLĀ asked as we spoke about these double standards. “Would it be a novelty if [a male producer] did it? There are these stereotypes, and it’s fucked that it affects our vision of people.” For women, these stereotypes can often become paralysing constraints, as TĀLĀ continued, “I’ve also had it where someone has said to me, ‘I just feel like you’ve got to do one or the other, you’ve just gotta be the pop star or the producer,’ and I don’t really get it though, why can’t I do, or be, both?”

Although we spoke about the trials and tribulations of being a woman in the music industry, it was inspiring to see TĀLĀ use these moments to fuel her determination. “I remember someone saying to me quite early on, ‘you have a lot of assets here, you’ve got a lot of things that you can do, there’s a lot of talent and potential here.’ I was trying to do a lot of things; produce, sing, be an artist, write, all these different elements. And he was like, ‘this is what makes you different, but it’s also going to be the biggest challenge for you because it’s gonna make it harder.’ But in a way, I found that quite comforting. It gave me a kind of confidence to be like, you know what, it might be something which is harder for me, but it is something that I’m very proud of. I’ve had to become self-sufficient because I couldn’t rely on people; I had to learn it myself. I think it’s important to learn your trade and to learn it properly.”

It’s exactly this spirit of self-sufficiency and enterprise that Red Bull Studios are fostering with #NormalNotNovelty. Here’s hoping that the future of the music industry is flagrantly femme.

Click here to find out out more about #NormalNotNovelty workshops. The next event is on Tuesday 9th May with the ballot for tickets open from 1 – 4 May.