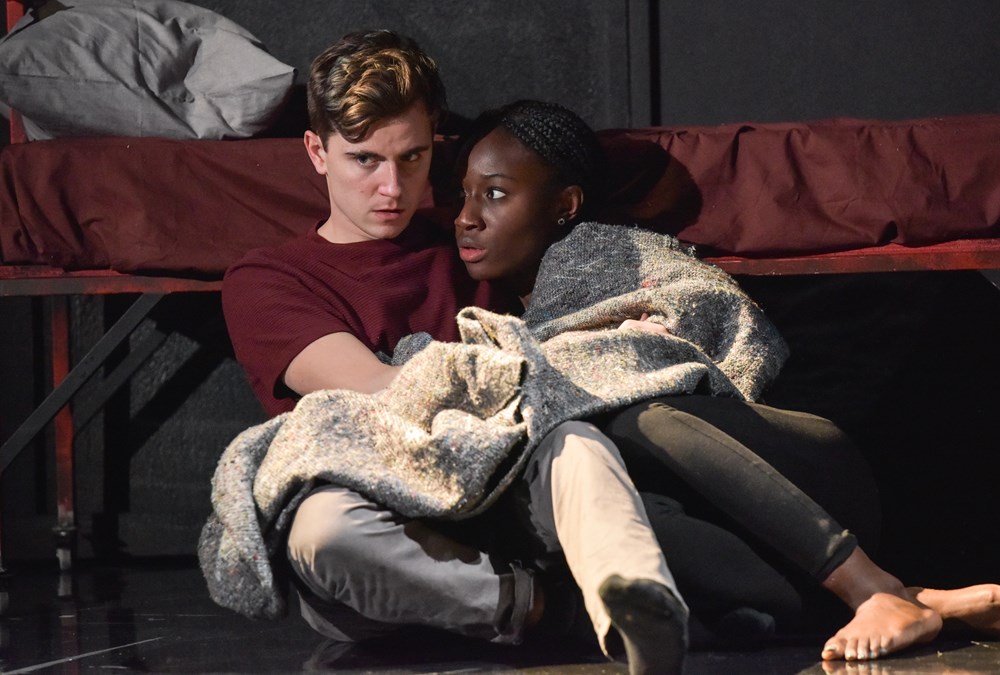 In 2019, fans of Malorie Blackman’s groundbreaking 2001 young adult novel, Noughts & Crosses, have suddenly been blessed with two visual adaptations and news of a fifth book. While a glitzy BBC One drama starring Stormzy is set to grace our screens at some point soon, the Noughts & Crosses play, currently showing at the Theatre Royal Stratford East, holds its own, with even more weight and relevance 18 years on from its source material’s inception – in a society where figures like Reni Eddo Lodge and Akala have been doing their best to hasten mature conversations about race.

Absolute power is a corrupting force, and in our world, we’ve come to recognise power and whiteness as virtually synonymous. But in Malorie’s world, the rules are totally reversed. The black Crosses make up the upper echelons of a dystopian society, controlling wealth, resources and government whilst implementing segregation in education and social life. The white Noughts are inferior, working low-paid jobs, experiencing discrimination at every level and receiving draconian punishments when they step out of line.

Like all good depictions of a divided society, there’s a love story that’s central to the plot. We follow Callum (Billy Harris) and Sephy’s (Heather Agyepong) relationship from childhood friends to forbidden lovers, as tensions reach boiling point in their world. Frustrated Callum is a poor Nought with a mentally ill sister, and an increasingly militant brother and father. Precocious and sheltered Sephy comes from a famous Cross family; her ruthless father is the Home Secretary, her mother a barely-functioning alcoholic. The play kicks-off with the two families at war; Callum’s mother is fired as Sephy’s family housekeeper and the two must continue to meet in secret.

“In our world, we’ve come to recognise power and whiteness as virtually synonymous”

Sabrina Mahfouz’s stage adaptation is directed by Esther Richardson and cleverly stays true to the essence of Blackman’s books. The audience is encouraged to ask difficult questions around modern-day racism through the creation of a not-so-strange world, where terrible things, straight out of deep south America or apartheid-era South Africa, happen to good people. It’s action-packed and brilliantly acted but at times the production feels slightly rushed – you find yourself yearning for a more in-depth look at key moments: Callum’s panic attack at his newly desegregated school, Sephy’s mother’s affair, the court case following a devastating bomb attack.

There’s no doubt that conversations around race and identity have moved on tremendously since Malorie first published her book and Sabrina’s production takes this into consideration at times (a white character sporting a brown plaster and complaining about it not having her skin tone is one interesting example), but more of these small-scale contemporary references would have been brilliant. For example, how bold would it have been for white actors to depict hair discrimination on-stage? Or speak of a lack of representation in their favourite films or books?

Heather’s depiction of the naive and hopeful Sephy is spot-on, and her interactions with the wonderful Billy are deeply emotive. The on-stage chemistry between the two is clear to see and it’s easy to relate to their teenage relationship – it’s full of hope, angst and first-times. But beyond their relationship, the play really comes to life when it examines how societal discrimination permeates on a micro-level in their homes. Both the Nought and Cross families are ruled by sadness and despair, and we feel the pain of their loss and love in every scene. In Malorie Blackman’s deeply divided world, nobody wins.

In the stage production of Noughts & Crosses, all of the big thought-provoking themes from the book are there, their impact fantastically explored by a strong cast and imaginative set. Just a little more focus on the smaller details would situate the adaptation comfortably in 2019.