On pronunciation and having two names 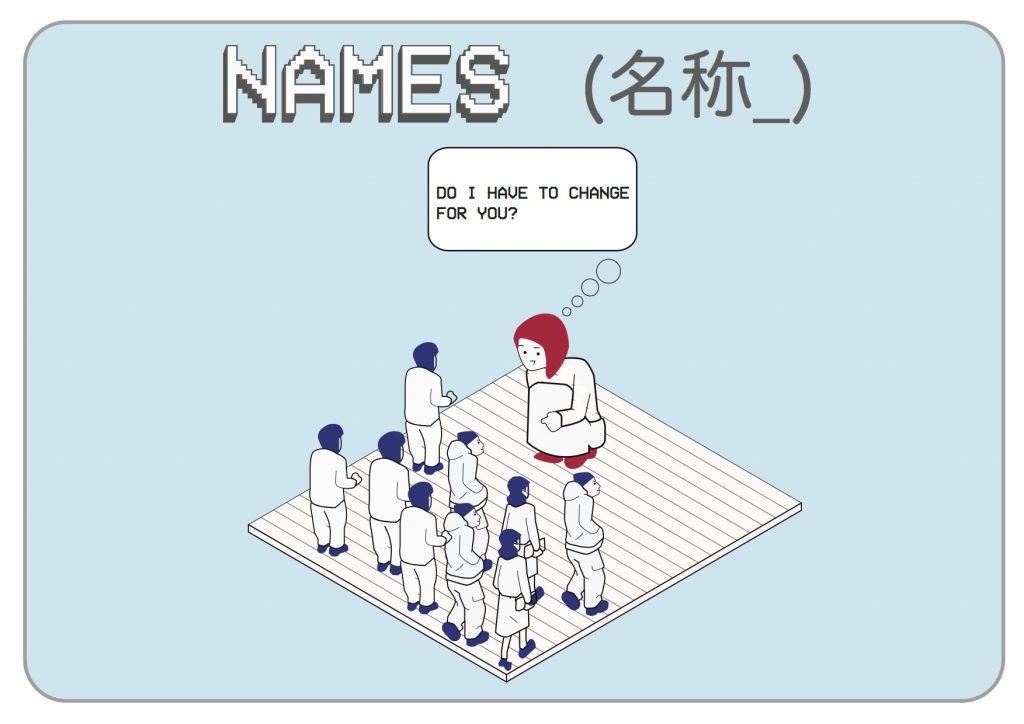 I have two names: Huai-Hsin Hsu and Alice Hsu. As a result of repressed shame and confusion, I have never openly spoken about my Taiwanese name and my honest feelings towards it, given that I live in Britain where I am surrounded by “normal” names.

Note: My name is Taiwanese and I identify as being from Taiwan, independent to China (contrary to what mainstream media may assert), for political, cultural and geographical reasons. In Taiwan the main language is Chinese (the traditional version, as opposed to the simplified version in mainland China) due to inherent connections in diaspora.

Firstly, I’d like to point out that my name, Huai-Hsin Hsu, does not sound like how it phonetically reads. As with most Taiwanese immigrants with names that consist of characters as opposed to letters, my name 徐懷欣 (in Mandarin, the surname comes first) was officially translated by British authorities into English letters (Huai-Hsin Hsu) when my family and I moved here. If I could more literally translate 徐懷欣 into English (or English-resonating letters) to reduce mispronunciation, it would be something along the lines of Hùái-Shīn Xiu/Xú or Hùái-Shīn Shiu/Sheue/Shü. But as you can see, it’s very hard to accurately represent the spelling and intonation in written form, when every syllable just sounds so radically different from English or any other Western language.

But what is problematic to me is not the inconvenient English spelling. It’s how this general issue of my name has spiralled into a blurred mixture of anxiety, guilt, shame, bullying and internal racism.

“On the one hand, there’s the shame for having such a difficult name, whilst on the other lies the guilt for wanting to replace it”

When I was around the age of five or six, my sister and I asked our parents if we could change our forename to an English one so that people could pronounce it properly. Just thinking about how early in my life I had internalised the embarrassment about having an “oriental” name makes me nauseous. On the one hand, there’s the shame for having such a difficult name, whilst on the other lies the guilt for wanting to replace it. If I could go back in time, maybe I would not change my name. But what most people don’t realise is that, for me, the topic is so much more complex than that.

Over the years I have allowed, accepted (on a superficial level, at least) and even told people that “Hsu” is to be pronounced as the English word, Sue. Similarly, I’ve silenced the “H” in my forename telling people that it’s “Huai-Sin” when said aloud. I’ve said it in a strong English accent to avoid the awkward hassle of my British peers trying to pronounce it right – but not quite getting it – then me having to repeat myself so they can imitate again etc. I usually swiftly move on from this topic because it feels so tragic on my behalf.

“I have already adjusted my name to fit in with the culturally Western idea of what sounds acceptable, yet these peers still manage to find ways to poke fun at me”

School was a particularly hard one. For those with “unusual” names, you’ll recognise the dread I would feel at registration in the class when a new/supply teacher would try to read my native name as documented on the register. As they got further down the list, my heart would start to race, apprehending the well-known giant pause as they reached me. Then, followed by a hesitant “umm…”, sank the feeling of humiliation as I nervously raised my hand to admit that this unpronounceable name belonged to me, whilst simultaneously lying about how to pronounce my name if the teacher asked. Then there was the ridicule – my forename was continuously compared to Hoisin Sauce. Likewise, throughout secondary school my surname became a sort of parody: either by an exaggerated enunciation “H-SUE”, by people making sneezing noises (i.e. HACHUU, or HASOO), or by people constantly asking “Alice who?” (because of its similarity to “Alice Hsu/Sue”, ha ha, NOT).

It’s a horrible feeling of inferiority to these white people who are tossing my name around as if it’s a some kind of punchline. Worse is that what these people mock is an anglicised version of Huai-Hsin Hsu. I have already adjusted my name to fit in with the culturally Western idea of what sounds acceptable, yet these peers still manage to find ways to poke fun at me. They perpetuate the cycle of fear in me; fear that the more I revealed my “otherness”, the more I would be a target for bullying.

I do wish I had stood up for myself more instead of staying quiet and sometimes laughing along. But what strikes me more is how I’ve been conditioned to be rid of these details in my roots.

My childhood and teenage years in Britain have been greatly orientated towards westernising anything “Chinese-y” (I use quotation marks as this adjective is often used in a really offensive context) about me; not only in a cultural and physical sense, but also linguistically. I did not want my friends to know that I went to Chinese school – a really great community – every Saturday, nor did I put effort into learning the language. When my friends came round my house, I distanced myself from a language I felt alienated me from them, pretending I was not fluent (when I am) by putting on an English accent when speaking it. I was (and sometimes still am) terrified of exposing the “oriental” tones that I associate with and I’ve naturally lost tonal fluency and a lot of vocabulary-related knowledge that was previously ingrained in me.

“Even in a linguistic context, white people feel the need to possess our foreignness”

Perhaps this stems from the fact that I didn’t know any English when I moved here as a toddler. Even as I became accustomed to this new language, I was slow at picking up idioms and colloquial terms since my parents aren’t at native fluency. I’ve found myself stuttering a lot due to the fear of making grammar mistakes and feeding into people’s perceptions of my stupidity. Being less “well-spoken” (whatever that means) can be isolating.

However, on top of this normal desperation to fit in, there is a type of gentrification; one that is fuelled by a society that taught me the sound of Mandarin is unpleasantly alien, grotesque and jarring. Considering the influences of those around me as well that of the media, Chinese has always been a language that the cultural West enjoys reducing to funny-sounding gibberish. Even in a linguistic context, white people feel the need to possess our foreignness. They pick it up, casually bash it around, manipulating it into a tool with which they can feel power. Once again, they carelessly wipe away the meaning and integrity of what we’re at home with – what belongs to us – in order to assert themselves as the norm; the strong ones.

Racism manifests in linguistic discrimination. And, as it is less widely discussed, racism against East Asians, in this case specifically those of the Chinese diaspora, should be talked about more. My name and my native language are parts of my identity, not commodities for anyone to abuse and lampoon. As integral parts of my existence in two very different and wide cultures, they are two living concepts that deserve appreciation and respect.