What I learned stood on a picket line with university staff 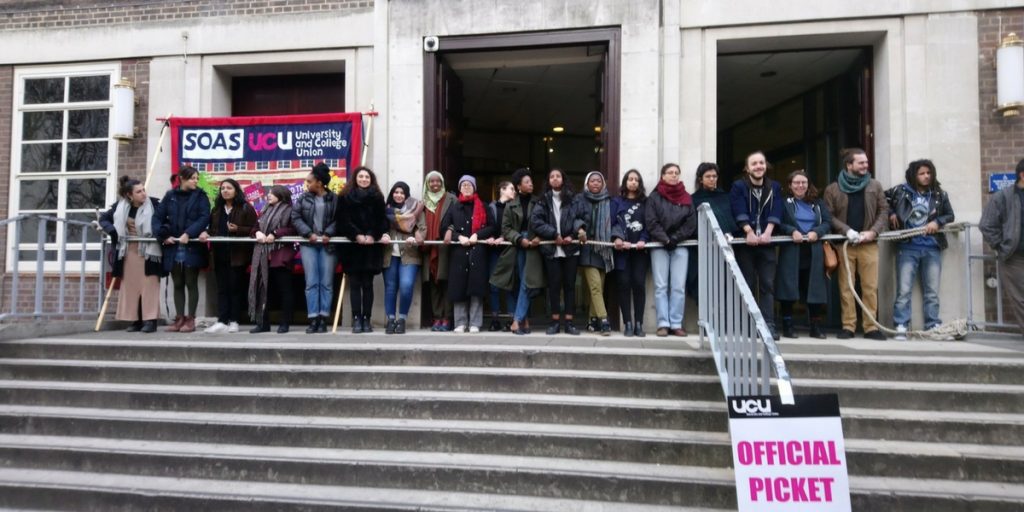 After 14 days of picketing through snow storms, sunshine and rain the first set of University and Colleges Union (UCU) strikes are over. University staff across the country have exercised their collective power by withdrawing their labour to demand fair working and living conditions in the face of cuts to their pensions and pay.

At the same time, students have come out to show their support for the strikes, standing alongside their lecturers on the picket, occupying campus buildings and taking part in demonstrations. The strikes, however, have not been without their complications. The dispute has exposed rifts within the student body at my university, particularly over what solidarity means and how it is expressed.

The strikes mark the largest collective industrial action in UCU history. The scale of the strikes is proportionate to the changes the sector employer, Universities UK, attempted to introduce in October, 2017. These changes entailed a shift from a “defined benefit” to a “defined contribution” pension scheme. Essentially this change would see staff on the USS pension lose almost £200,000 from their pensions, forcing them to live on £10,000 p/year in retirement.

We cannot ignore the racialised and gendered implications of these changes. As more women and people of colour (POC) enter into academia, working conditions for early career academics have grown more precarious. The higher education sector is increasingly relying on early career academics, employed on casualised contracts with lower pay, to deliver teaching and course content.

At the same time vice chancellors’ pay continues to grow, concentrating wealth in the hands of majority white male university managements. The cuts to pensions are yet another measure that increases the precarious nature of employment for early career academics, and thus entrenches the growing racial and gender hierarchies in universities.The inequality within universities points to structural and systemic issues within society. The institutional and structural barriers in higher education stem from colonialism, a system which was built on and entrenched by racial hierarchies within society. For me, the picket line was an opportunity to collectively fight against inequality within the education system and for free education.

I joined the picket line because I saw an education system in crisis. For the past eight months, I have worked as one of four co-presidents in the SOAS Students’ Union. I have seen the hardship many people of colour and working-class students face in struggling against institutional barriers, such as the black attainment gap and the lack of financial support. During the strike, I stood alongside other women of colour and working-class women to protest the inequality and capitalist exploitation within our university. We established barriers with our bodies to highlight the structural barriers that exist within these spaces.  Our collective strength and direct action showed that without us the university is simply an empty building.

“Crossing a picket line is not merely walking past a fellow member of the community. It is symbolically demonstrating which side of a dispute you are on”

This was not, however, the view that all students took towards the strike. I found as the Students’ Union reached out to students, that many were unsupportive of the action. In order to provide space for students to raise their concerns, the Students’ Union officers organised an open forum titled “I’m in solidarity, but…”. During this, there were a number of students who expressed their solidarity with the strike, but also claimed they needed to cross the picket line to use the library. Others said, “I’m in solidarity, but I pay £9000 a year for my degree and I need to get my money’s worth.”This attitude is unsurprising within a capitalist society. The neoliberal student sees knowledge as a commodity to be consumed. This inherently individualistic approach to learning, in this case, meant students undermined collective action for self-interest. Crossing a picket line is not merely walking past a fellow member of the community. It is symbolically demonstrating which side of a dispute you are on. It is showing a lack of respect for the strikers’ withdrawal of labour and attempts to shut down the institution they work for.

On the final Friday of the strikes, I stood on a hard picket line in an attempt to completely shut down the university. Many students taking part in this action suffered extreme violence from those who tried to cross, resulting in one fellow sister of colour on the picket having her knee dislocated. The violence used by those crossing the picket, I believe, was symptomatic of systemic violence towards women and non-binary people of colour. As angry students and staff screamed in our faces, we reaffirmed our resolve to continue to fight for justice.

This is not to say that all people of colour supported the strike. There were also a number of POC students who expressed that they needed to cross the picket line. Many felt that the structural disadvantages they experienced meant they did not have the privilege to take part in this collective action. For me, this speaks to perceptions of activist spaces as white spaces. It is undoubtedly true that whiteness permeates all aspects of society, and activist circles are no exception.Ongoing issues of microaggressions, tokenism and de-centering people of colour are all symptomatic of structural racism. However, this does not mean people of colour are unable to take part in activism. To assume this is also to overlook past and ongoing POC struggles for liberation. In a sense, the picket line brings to light issues within activist spaces, but can conversely provide opportunities for these spaces to be reclaimed.
So what does this all mean for our collective expressions of solidarity?I do not believe that showing solidarity will always be comfortable or convenient. Many students, especially working-class students and students of colour, sacrificed a great deal to stand on the picket line. Those who chose to do so were not thinking about the short-term implications of the impact of these disruptions on their studies. Instead, we chose to collectively stand up against an unequal and unjust education system.Our solidarity was an expression of support for our lecturer’s fight for pensions, but it was also an articulation of our ongoing struggle for free education. Coming together is not an automatic or natural process in the capitalist and individualistic society we live in. During the strikes we –- both students and staff –- built solidarity because we believe we have a duty to continue to fight for our collective liberation.