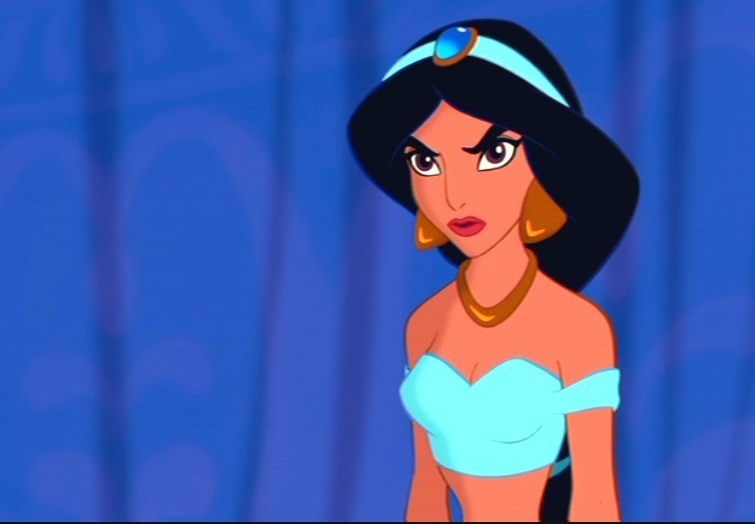 We all have a favourite Disney princess. Whether it’s Cinderella, Mulan, or even Thumbelina – there is a fictional character out there for each one of us to identify with. The feelings that I had towards Aladdin’s Princess Jasmine, however, became much more than normal childhood admiration. To me she was a positive cultural symbol against a backdrop of Orientalized figures in the media. When I realised that Disney’s live-action version of Aladdin had casted Naomi Scott as the princess, I felt a little more offended by the decision than I maybe should have.

You see, the blonde friends at my primary school dressed up as Cinderella or Aurora and could also pretend to be Hermione in the playground. In fact, my brunette and redhead friends would also imagine themselves as Hermione. Apparently, their hair colour didn’t matter if they were Caucasian. When I told these girls that I, too, wanted to be Hermione, they gently told me that I would be better off as a different character since we had so little in common. This childhood memory is pretty much irrelevant to my adult-life, but I can retrospectively conclude that it marked the beginning of many micro-aggressive events that would, ultimately, cause me to feel alienated and uncomfortable in my own skin. It was also the first thing that came to mind when the actress of the sought-after role was revealed: Oh, another fictional character that won’t represent me…

“I can randomly recollect watching TV shows and films and being bitterly disappointed at the representation of Arabs, Asians, and Muslims”

I was born in 1996 but my earliest memories are post-9/11. I can randomly recollect watching TV shows and films and being bitterly disappointed at the representation of Arabs, Asians, and Muslims. We were the villains; we were abnormal; we were strict and boring. Or – worse – we were absent presences. In the Simpsons, the only Muslims/Arabs I remember being featured were a family of suspected terrorists. During the short phase in my life in which I aspired to be a film director, I recall the excitement I felt when my parents rented out The Hurt Locker, and how pissed I was when I realised it was another anti-terror movie. Apparently we should always empathise with white soldiers and villainise the native people. The only thing I dreaded more than modern Western war movies was watching the news confirm that brown people were barbaric and violent.

I actually didn’t watch Aladdin properly until I was in secondary school – my baby years were filled with segments of Ants Life, Hercules and The Little Mermaid. Regardless, I loved that my friends would pet-name me “Princess Jasmine”. In my head, this equated to a shift in perception; people could perceive a brown girl as pretty and girly as opposed to different and extreme.

Once I finally got around to watching the entire movie, I fell in love. The Sultan wore similar clothes to my grandfather on his wedding night. He even mentioned “Allah” in casual talk. It was so strange to hear a protagonist mention Islamic terms instead of a villain. This positive, lighthearted characterisation of an Arab/Asian man was new and gave me hope of a diverse and fair portrayal of these alienated groups.

“When thousands of girls have only one popular fictional character to look up to, their overprotective and defensive attitude over this role can be understood”

Naomi Scott is beautiful and I cannot say she will whitewash the character because of her Indian ancestry. However, I can’t help but support the masses of criticism, which flooded my twitter timeline when her casting was revealed. I guess she just isn’t brown enough to carry the same symbolism as the cartoon Princess Jasmine. When thousands of girls have only one popular fictional character to look up to, their overprotective and defensive attitude over this role can be understood.

Many Arab tweeters pointed out that, by casting an actress who is partially Indian, the movie encouraged the misconception that all brown people are the same and ignored the huge difference between Asian and Arab cultures. I wholly agree with this criticism and, yet, I cannot say that is the reason I was bothered by Scott’s role.

Growing up, I wasn’t certain of Jasmine’s ethnicity. I simply saw a brown character and was happy with her positive characterisation. It didn’t really matter if she was Middle-Eastern or Indian. I was bothered because Hollywood once again casted an actress with Eurocentric features to represent minority groups. The best thing about Princess Jasmine was that she didn’t need light skin or a small nose to be beautiful. And while it is unfair to deny Scott of her Indian heritage, it is also unfair to deny millions of girls a representation of alternative beauty.

The current mainstream media showcases Caucasian and Afro-Caribbean actors and actresses and, often, sidelines Asian (including Eastern Asian) and Arab talent. This was an opportunity for us to see something different on our TV screens. If you regularly see someone who looks like you playing the hero, you will probably not understand the fuss over this casting decision. If you are an ethnic minority like me, you will understand how important it is to feel represented in something as trivial as a film.

I hope this decision will not deter brown girls from feeling accepted, beautiful or pursuing their wildest dreams. If nothing else, the cartoon version of Aladdin can always be watched as a reminder of the rare moment when the West portrayed some brown characters as inherently good.