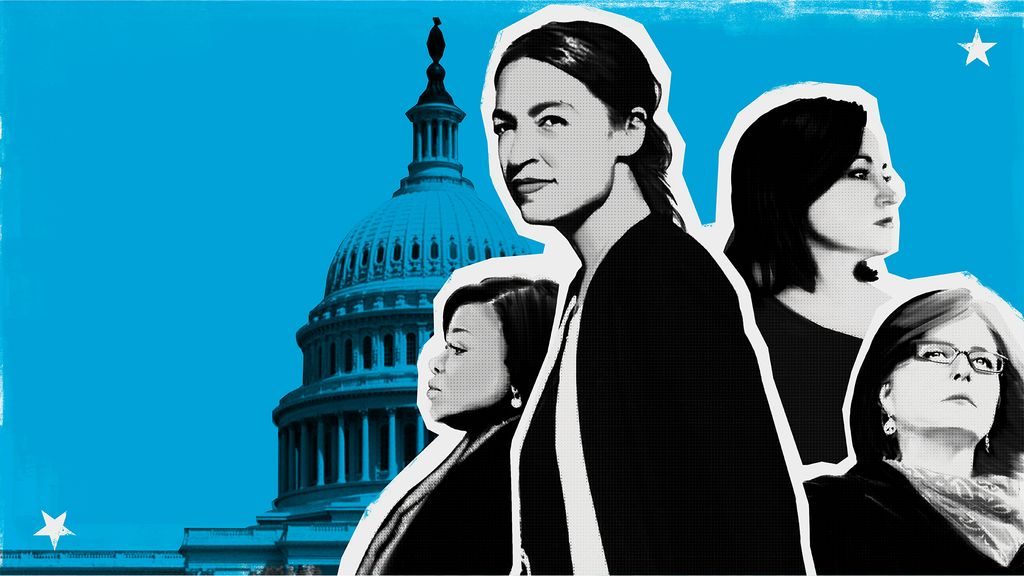 On the day after Trump’s election in 2016, the world felt like a different place. But, instead of giving yet more airtime to the rise of the far right, filmmaker Rachel Lears set herself the task of looking for viable alternatives and in doing so created the hit Netflix documentary Knock Down The House.

With Trump visiting this week, the British royal family and government have rolled out the red carpet for him leaving people outraged. Though the fat orange blimp casting a shadow over medieval Westminster provides comic relief; we must still be concerned at the breakdown in American and British politics as our respective leaders tee off in a “hold my beer” competition of who can appear more careless. Conversations about activism, money in politics, solidarity and sacrifice have never felt more relevant. In the recent European elections, the nationalist Brexit Party, that didn’t exist until a few months ago, gained 31% of the vote share and won more seats than Labour, Conservative, SNP and Greens combined.

At the same time Rachel and the cast touched down in the UK as yet another pertinent reminder that left wing allies should also travel far and wide and connect with people based on what we want our politics to look like. One led by the grassroots rather than by corporate donations. The film follows four powerful yet ordinary women go up against previously immovable and corrupt incumbents in the race for Congress. The 90-minute tear-jerker cuts between Cori Bush in Missouri, Amy Vilela in Nevada, Paula Jean Swearengin in West Virginia and, of course, unbeaten contender Alexandria Ocasio-Cortez in New York.

It’s early in the afternoon when I meet the cast at the Ham Yard Hotel in Soho. When I get there, former congressional primary candidates Cori, Amy and Rachel sit with the Netflix team chit-chatting over a cheese board. They are warm and friendly, jokingly imitating a strong British accent back to me. A few moments later, we are joined by Paula, who announces tearfully that she was to be a grandmother. The ladies embrace her, you can tell they are close. It’s the sort of bond that comes from giving your all to a shared cause.

We caught up to talk about their stories going up against the establishment and what it takes to start your own political movement. As Alexandria Ocasio Cortez says in the documentary: “For one of us to make it through, 100 of us have to try.”

Channel your trauma into action

When standing by watching their lives fall apart was no longer an option, these women took it to the primaries to make a more significant change. Rachel explains that the protagonists’ “personal stories” is where the power of the documentary lies. “The reason I chose to work with these women,” she explains, “was because of their ability to connect policy to personal experience. I’ve seen each of them really connect with voters and with communities in a way that engages people that ordinarily feel intimidated by the political process in the United States.”

Though they have such compelling stories, it doesn’t reduce the trauma they face when having to relive it on the campaign trail. Amy, who lost her daughter Shaylnne after she was denied medical attention due to not having health insurance, knew this was something she would have to deal with: “The minute I went political, I knew it was the end of my career. I knew that I would have to relive that trauma over and over again. I had people tell me my daughter deserved to die. She should have been more responsible and that it was survival of the fittest.” On why this spurred her to get into politics, she adds:  “I couldn’t save my daughter, but maybe I can save someone else’s child.”

Cori, provided medical assistance as a nurse during the Ferguson riots, where she was shot at and assaulted. “I went through it a lot during the Ferguson uprising,” she tells me. “We had cameras everywhere all the time. Secret cameras, cameras in our face, big, small. It was a lot. I didn’t even know what was going on at the time, you know, so I’m hurting, and I’m freaking out. Now, I have therapy and I have realised that self-care is important. Even though I’m still crappy at it.”

Despite all of this, they remain hopeful, Amy says. “We knew when we took that leap from being activists to running for office there was going to be great costs personally, financially, and emotionally. Each one of us had to go through that.”

The 2018 midtermmid-term elections that the four candidates stood in was one of the most expensive in US history. The “first and only member of the $5 billion club”, according to the Center for Responsive Politics. Since 2010, the Supreme Court has allowed companies to give uncapped, unregulated donations to political candidates. The documentary shows the gruelling process of cold-calling supporters to ask for more and more money. The uneasy candidates squirm and lap up all of the awkward silences because it is still better than having their candidacy bought rather than earned.

“[Corporate donations] have been an issue in American politics for decades,” admits Rachel. “It’s the shape that power takes in our contemporary era. I think it’s so much on everyone’s mind now in large part because of the Internet (where donations are published) no one can hide anymore.”

“Before, when I was talking about [corporate donations], it was still like, oh ‘you’re a wacko, only wackos talk about this kind of thing,’” Cori points out, saying that in her lifetime she’s noticed a change in tone but that people still need to be more alert because “you’re attacking the system”.

Though Paula describes how they’re also fighting back against candidates who fraudulently claim to be a part of their movement. “There’s a lot of people now that are saying that they are grassroots and they’re not taking corporate money when they are,” she explains.

You cannot make change by being comfortable, and it just doesn’t just happen. You have to be willing to be uncomfortable and push your level of courage

Make sacrifices, even ones that people don’t see

What happens when you don’t take corporate donations and have to hash it out on the bare minimum? Or when after you’ve lost the election, and you’re swimming in debt used to keep yourself and your campaign afloat?

“As an activist, I’ve lost many jobs,” Paula says. “I knew when I ran for office that I was gonna lose my job, I was unemployed for a while, even after the primary.”

Amy had similar financial struggles. “I did go into debt. I’m still in debt off the campaign a lot of [the challenger candidates] are. I mean, I used to be a [Chief Financial Officer], and I’m not able to get a job as a CFO anymore because I’m too controversial. I went from having a six-figure job to not being able to work.

Cori is still rebuilding after her devastating loss. “I’m trying to figure out how to keep my electric on, I’m having to figure out how I’m going to keep paying my bills and how I’m feeding my kids. The day after my election, I was let go from my job. It took a while for me to find a job. I had an eviction notice on my door, and my car was repossessed.”

Though they all lost so much participating in the election, none of them has an ounce of regret. “Personally, I would do it over again, many times,” Amy says resiliently. “You cannot make change by being comfortable, and it just doesn’t just happen. You have to be willing to be uncomfortable and push your level of courage.”

Fight back when you feel powerless

The political landscape is drab, it feels like the fight is lost, but Knock Down The House proves that it has only just begun and we need to be active in our strategising and mobilising. “Act like politicians,” says Paula. “Canvas, talk to people, reach people, get people mobilised and make sure that their voices are heard. That’s the most important thing. And talk about policy.”

Often, it can be about convincing others that the fight is worthwhile, Amy comments. “We’re challenging a system that’s in place now we’re creating more work, people are going to have to go out there, and it’s uncomfortable. We have to somehow pull them in to know that, you know what, you’re part of this and you’re not safe.”

“Do like we did,” Paula adds. “Run for office and challenge these people that are doing this. You guys know how to balance a cheque book, you know what’s going on in your community. It’s going to really challenge them and put their feet to the fire.”