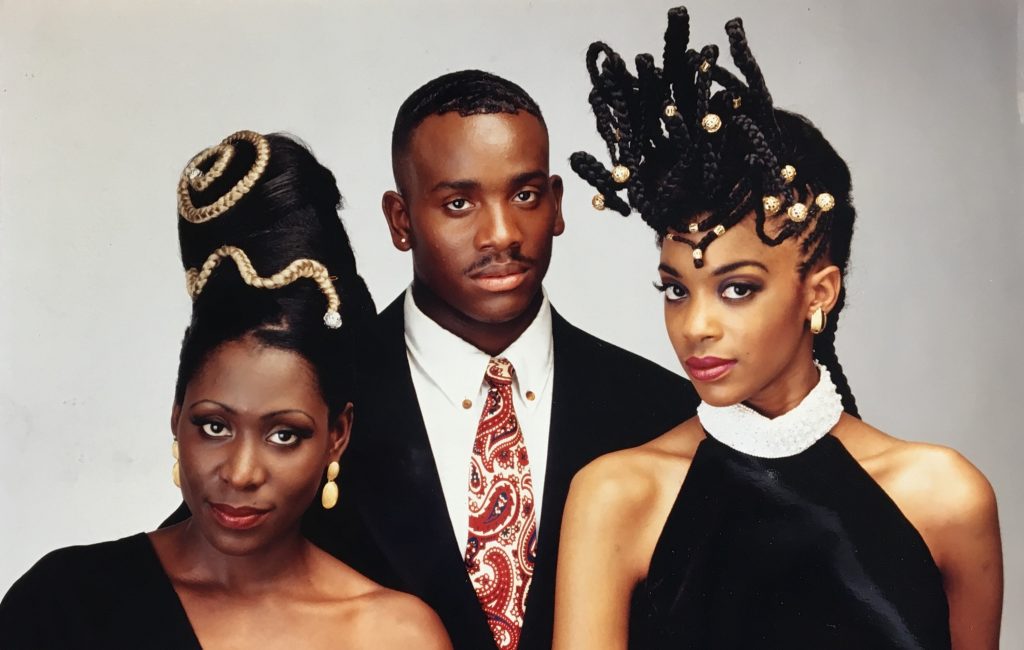 Hair that towers several feet above models’ heads, complex afro styles created in a fraction of the time you’d be kept waiting in your local salon, and products that you can’t find anywhere else. For over three decades, Afro Hair and Beauty Live has been a hugely influential exhibit of talent for black businesses and stylists in the UK. These photos are just the tip of the iceberg from a rich archive, a lot of which has been displaced.

Verna McKenzie worked as a main organiser for Afro Hair and Beauty Live alongside its media partner, Black Beauty and Hair magazine, until she gave up her role in 2019. First coming to the show as an exhibitor, she says that it has an important, if undervalued, place in black British history.

“[It started in the aftermath of the Brixton riots] because around that time people felt like we needed to do something for ourselves,” she says. In the pre-internet era, it was especially difficult to get your hands on suitable beauty products as well as Afrocentric clothing, black-authored children’s books, and black dolls. This meant that over the years, the trade show has adapted to be one of the most expansive and unique lifestyle experiences celebrating black creativity in the UK.

Growing up, my parents travelled from Manchester to London to attend the show and bring back products they couldn’t find up north. But, what always stood out to me, were the show-stopping photographs I would see of the event. Each year, there were a number of competitions where black stylists would flex their creative muscle and demonstrate the beautiful diversity of afro hair styling.

In order to build the reputation of the event as a must-see showcase, Verna and the team developed competitions. One of them was called Battle of the Barbers, where stylists would sculpt impressive shapes out of afros, or etch intricate drawings into men’s hair with their razor-sharp tools.

Speaking to gal-dem over the phone from a holiday in Barbados, she recalls: “Back in the day when there was more money around, I remember that Softsheen Carson would create a specially made boxing ring for the barbers to compete in and I would stand there and judge it.”

“We had so many talented hairdressers so we thought it was a good idea to start the Fantasy Hair competition,” adds Verna. “That grew to be sensational, iconic, because there aren’t many platforms where our hairdressers can show off. People came from all over the world to show what they could do using our hair.”

Among other creative clashes was Stopwatch Styling where the stylists had to “create a look to the clock”. In 2011, Aycan Kemal from New York Hair Design salon in north London won a Guinness World Record for the fastest time to braid a full head of hair. Crowds watched at the Business Design Centre in Islington as it took her only 15 minutes to finish 26 cornrows. “I think she’s won more competitions than anybody else,” she says.

By the 90s, Afro Hair and Beauty had cemented itself as a heavyweight in black British culture so, naturally, it was on the hit list for a fresh-faced four-piece called Destiny’s Child to make themselves known in the UK. When it was based in Alexandra Palace, the quartet performed and signed autographs for their “excited teenage fans”.

“That’s a funny story. These girls have grafted because I remember they came one Christmas time, they were brought over by a beauty company to open up a Pak store for promotion. Perhaps in Finsbury Park or somewhere,” Verna laughs. The next year they were brought to play to a bigger audience at Afro Beauty and Hair. “I knew who they were but they weren’t as big, they were just young girls trying to launch their career. I always regret that I could have been best buddies with Beyoncé and co.”

She explains that they’d had a lots of artists there over the years from Big Brovaz, and N Dubz to Estelle, while other celebrities like Idris Elba have been present in the stage shows.

Over the years, Afro Hair and Beauty Live has established itself as an incubator of talent. The likes of Derek “DeCutter” Clement who made a name for himself after showcasing, worked at Splinters salon, “the Motown of hair in the UK” back when a young Diane Abbott would sit in his chair on one day and a Nigerian oil tycoon the next. He eventually went on to manage P Diddy’s barbershop. Other winners from the show have gone on to make a name for themselves elsewhere on the entertainment circuit as scouts would call up or drop in to cherry pick talent. “Lathaniel Chambers went from our College competition for learning hairdressers to working on X Factor as their main Afro hair stylist,” says Verna.

“It’s been so dynamic,” she adds. “It’s unpredictable in terms of the art and creativity that you would find there.”