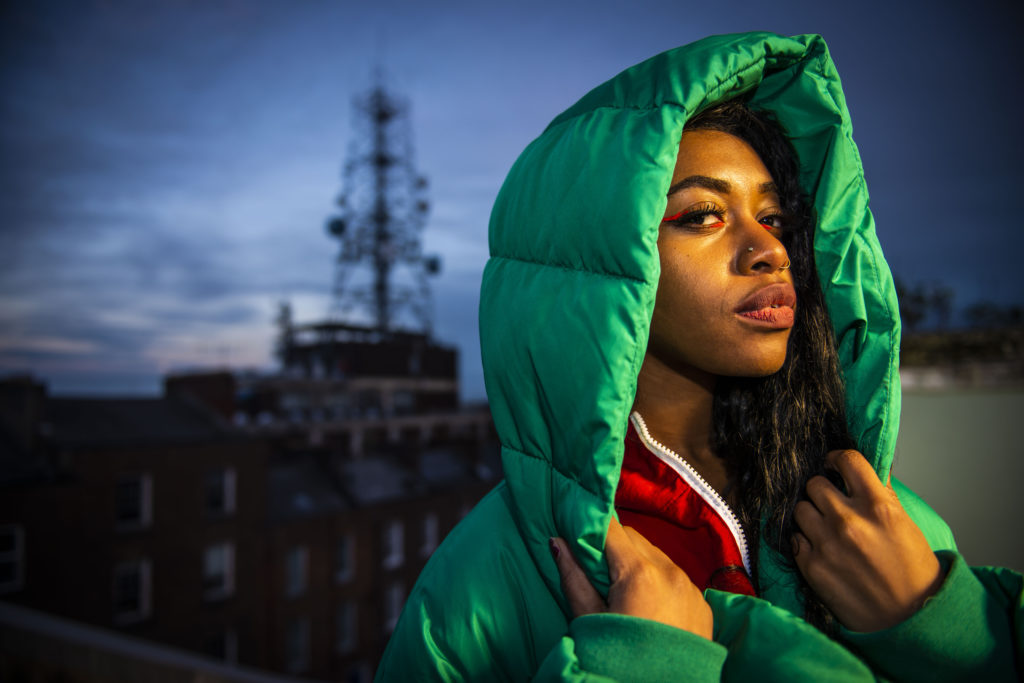 Ahead of a London performance, rising rapper and spoken word artist Denise Chaila (one of our 2020 ones to watch), considers the concept of ‘home’ as a dual citizen of Zambia and Ireland. As told to Karen Miano.

I don’t think that I’ve found my place here, I think I made it. I don’t think that waiting for someone to give me the green light to say “you can call this home” was healthy or practical or made sense, and it took me a long time to realize that we are all learning – we’re figuring this out.

Randomly, it gave me a lot of confidence in my identity when a science teacher asked me “do you consider yourself Irish?” and I was like “yeah”, and he seemed so quietly happy for the rest of the class – I don’t know why that conversation came up but it did and it struck me. I remember being in Zambia and having that same moment with one of my cousins and I let it slip that I missed home – and I realised that I was talking about Ireland.

But I guess it makes sense, and to be fair most of my primary socialisation – the way I was cultivated, how I speak etc is very Irish, but there’s a seed of Zambian-ness even in my principles – a seed that was grown and nurtured on Irish soil. To reject Irishness is to reject myself. Because if I’m not going to say that this country had a hand in making me… what am I going to say?

“To reject Irishness is to reject myself. Because if I’m not going to say that this country had a hand in making me… what am I going to say?”

I had this identity crisis cos going to Zambia…it’s like going back to your house and finding out your parents turned your bedroom into an AirBNB. It’s still your house, you still grew up there. But it’s kinda not your room anymore in the same way it used to be – you don’t have sole ownership of it.

Whereas living over here, in Ireland, kinda felt like moving out for the first time and staying with a friend. But you moved into their house, right? And you co-own it and you’re renting it out but you don’t really wanna put your feet up on the table sometimes. How quickly is the culture of the house gonna change, what can you take ownership of? Can I leave my stuff in the fridge overnight? Am I able to cook in the kitchen by myself or are you going to have a fit if I use this cutlery instead of this cutlery? And at some point you have to lay down the law and be like, “I pay rent here too!”. We came from other houses. This home that we made together, it is only right and normal that we’d carry on some habits from what we learned and how we grew. But if you try to enforce your mother’s law in our kitchen, I’m gonna fight you, because it’s our kitchen – we both need room in the cupboards.

I’ve been noticing a lot of right-wing political rhetoric in Ireland at the moment and I notice that in every interview I do, giving the mic to a black woman is something that people aren’t always comfortable with. I’m playing this Imagining Ireland gig. And I’m really conscious that I’m the only person who’s speaking with this voice. Being the only black woman on that particular rolodex of people means something.

Imagining Ireland put me on the bill – and I’m a grime artist. I don’t make folk music, I’m not talking about Irishness in my bars the same way someone who’s white Irish who has a lineage and a heritage that they can trace in this land has. Grime in Ireland is still quite new, the history and richness of it, however, are not.

A lot of everything that I’m doing and saying completely flies in the face of “traditional Irishness” because I am self-created and I revel and celebrate that in so many ways that depart from what nationalism says you should value yourself as. I start to talk and I open my mouth and just by virtue of being black I’m getting people shook. People don’t want to hear that or question or integrate the idea of “Irishness” – but all of these things that you’re basing your Irishness on seem quite flimsy. Like [people will say to me] “you can’t be Irish cos if you’re Irish then what does Irishness even mean?” – and I’m like, if the definition of Irishness is that fragile it deserves to crumble. If it’s just folk music and whiteness then it’s going to crumble.

Imagining Ireland, an evening celebrating the rise of women’s voices in Irish art and literature, takes place on Friday 21 February at the Barbican, London. Denise Chaila will be among those performing. You can find tickets on the Barbican website