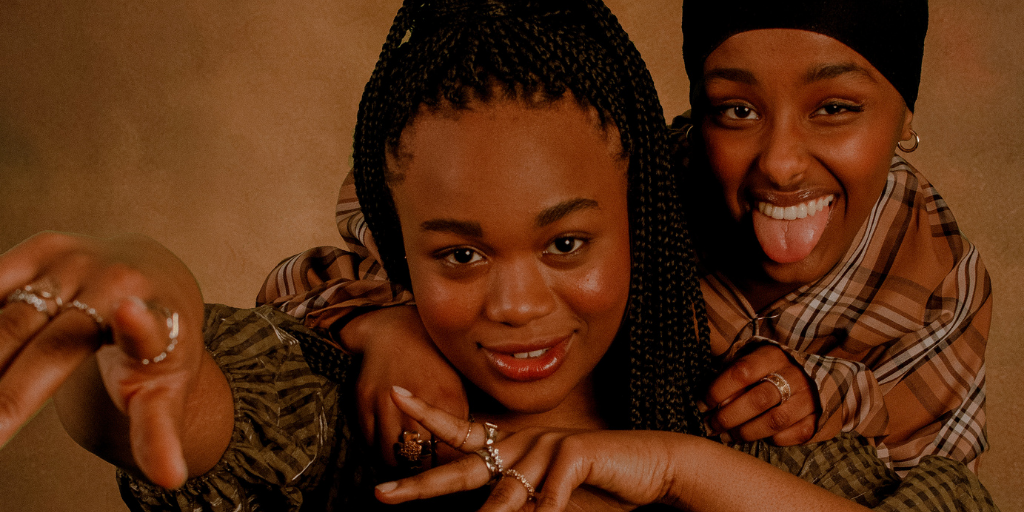 Rocks stars: Meet the teen BFFs who went from classroom bants to the big screen

The air is buzzing with conversation as Bukky Bakray and Kosar Ali, the stars of the hotly-anticipated coming-of-age film Rocks, arrive. We’re at the gal-dem office, in a pre-pandemic crowded room, a concept that now feels criminal. With a clothes rack in one corner and a portrait backdrop set up in another, the set up is reminiscent of school photo days; missing front teeth, pleated collars, and Clarks’ Daisy shoes. The room lifts with the smell of oranges as Sarah Gravon, the movie’s director, and her team sits at a table with me, peeling them and nibbling on other snacks as the two starlets, Bukky, 17, and Kosar, 16, light up the room with their banter, and are directed on potential poses for the camera. Their electric chemistry is endearing and it’s clear they’re living their dream.

In the opening scene of Rocks, we see a series of Snapchat clips of the characters having fun on a sun-bleached rooftop near the city center, a heartfelt and emotional journey through the lives of Shola, nicknamed Rocks, Sumaya, and their friendship group, one that helps them weather their own personal storms.

Kosar Ali, the upcoming Somali-British actress who plays Rocks’ right-hand-woman, Sumaya, explains the importance of their bond on and off-screen for the development of their characters, “We made the characters. It was never set characters, just our bond,” she says. The film came together in an unusual way. It wasn’t a traditional audition, allowing them to fully gage with and connect to their character, their cast members, and their performances during filming. They were allocated their parts through the real friendship built between the cast. “We all have a different element about us and that’s how we all bonded and vibed towards each other. That’s how we all connected in a creative and different way.” It paid off as it received scores of praise after it premiered at Toronto Film Festival.

Rocks (out 18th August) is a socially realistic tale of resilience, love, and sisterhood in the face of parental neglect through the eyes of Rocks who is left to care for her younger brother, Emmanuel when their mother suddenly abandons them. We follow the two as fugitives from child services, bed-hopping between friend’s houses, and living off the money Rocks makes through doing her friend’s makeup at school. The two find comfort in Sumaya’s company, reveling in the closeness of her family and culture. When the authorities catch up and take Emmanuel away, it’s Rocks’ friendship group, led by Sumaya, that step up and stand by her. “I feel privileged to be in a film like this and it’s kind of upsetting that people were saying that this is the first time that these issues are being represented in this way and from this point of view,” Bukky says.

Auditions for the film was a process consisting of workshops with the cast and writers. Bukky, who was given the titular role, says “it made things much more comfortable” as the girls weren’t professional or trained actors. “We’re not used to being vulnerable on the screen let alone being vulnerable around other people because we were brought up to be strong women,” she explains. “If I ever felt like I was falling down, I knew that the people around me believed in me and they knew I could do it. I didn’t ever feel like I was lacking.”

“If I ever felt like I was falling down, I knew that the people around me believed in me and they knew I could do it”

For Kosar and Bukky, this is their first movie. It’s the stuff you let yourself think about as a teenager as your mind drifts from one fantastical scenario to another as the charismatic duo reveal they were cherry-picked when filmmakers visited their school. Writer Claire Wilson told The Financial Times that they “basically picked themselves”.  Street casting inner-city London girls adds to the authenticity of the fly-on-the-wall project. “Rocks is reality,” says Kosar. “This is some people’s lives, it’s not a sad story to make you upset. It’s empowering to see that there are young girls who go through this and have to have a strong character and feel like ‘Nah, I got this, I can handle this, I’m a powerful person.’”

Put your hand up if you’ve seen a British film with a troubled Black lead struggling to find their way out gang life and their disadvantaged environment, that just so happens to be in the gloomiest, grey-filtered city, ridden with creepy alleyways, forgotten council flat blocks, and seedy, poorly lit underpasses. Yeah, I think everyone’s hands went up for that one. But there’d be less in the air if I asked how many have seen films that dissect working-class girl’s struggles in similar environments. It’s the elephant in the room when discussing the British film industry, especially regarding films that are based in London. These films often neglect to focus on women as anything other than satellite narratives that orbit men’s drama.

Bukky and Kosar say British films have never really appealed to them. “There’s a lot of Nollywood playing in my house. I love American films as well, my favorite film is If Beale Street Could Talk,” says Bukky. She cites the lack of representation and the male-lead storylines like the Kidulthood franchise and the recently released Blue Story for her aversion to UK cinema. “It is mainly for men and if the girls are depicted, they are in a very stereotypical way,” she says before adding that even though POC families do face issues, it’s important to show their joy too.

Kosar, who is Muslim, can’t remember a movie that has positively represented her culture and religion. “On the screen, there was never a Muslim Somali girl that didn’t dash her headscarf or do a madness.” At first, the thought of representing the Somali community in Rocks and the issues with representation in the film industry caused doubt for Kosar, “It was a bit like, do I want to do that? How would the Somali community receive this? Religion plays a strong part of who I am so before I do something, I need to triple check that,” but after discussing the matter with screenwriter Teresa Ikoko and her mum, she chose to represent the Somali community on her own terms, “I wanted it to be realistic for her [Sumaya] and the community she was from in her estate.”

It’s through Sumaya and her family that we get an insight into Somali culture as they prepare for her brother’s wedding. As we follow Rocks and Emmanuel through Sumaya’s house, we are able to indulge in the wonders of Somali tradition. From food to wedding dresses and outfits, an array of intricate details are on full display. It’s refreshing to see a tight-knit Somali family, a cultural representation we scarcely see in British film. “All the films I’ve watched that have had Somali characters in it were violent or a victim, just portrayed in a mad way. It felt great to show our culture and how it’s actually loving and fun and bright and exotic,” Kosar explains.

“On the screen, there was never a Muslim Somali girl that didn’t dash her headscarf or do a madness”

Given that Bukky and Kosar are still young, having started filming for Rocks at the ages of 13 and 14, what were their lives before acting? Well, Kosar is a skateboard fanatic hailing from Forest Gate, her mum is first-gen born in Somalia. “She came here when she was 18-years-old and had her first kid here. I like fashion, I wanted to design my own fashion line because fashion is how I express myself. My mum’s a bit of a fashionista herself since I was young, she would make clothes, so I think I kind of got that from her.

Similarly, Bukky’s mother is also a first-gen African hailing from Nigeria. She’s an East Londoner, living with her parents and four brothers, her sister is living out in South Africa. “I have a very creative family, my brother is an artist, my other brother does clothing, one’s a graphic designer and a producer. I love music, art, and oil painting.” As Bukky beams, Kosar interrupts her, “She’s sick, don’t let her be humble, she’s a sick artist.”

As the two begin to digress about Bukky’s makeup skills, I found that Bukky and Rocks’ passion for makeup as a ‘mini grind’ was something they had in common as Bukky explained her passion for makeup. “When I was in Year 8 I started doing makeup and that’s how I started making my money,” she says. “I started with a shoebox of five products and eventually, in about six months I had a whole suitcase and all my friends helped me.”

Refreshingly out of step for a coming-of-age film about girls, their secondary school experience isn’t led by drama or the idea of boys, but instead having fun with each other. “We’re in a day and age when social media is a very big factor and people are just so busy focusing on how they look and impressing boys, especially at this age. I just feel like girls need to be themselves, have fun and be girls,” says Kosar. It definitely passes the Bechdel test as the pair make beats on the table, sing loudly, and planning for the future. She adds: “We have that banter in real life as well, making beats to rhyme and stuff, just vibing, so that part was definitely natural on-set because we do that anyway in school.”

For these two schoolgirls, this fairytale experience has left them keen to continue a career in entertainment. “Right now, I’m trying to watch as much theatre as I can, I’m so inspired. I read a lot of literature, writing as well,” she says. “This process taught me; we have time to take risks.” Kosar agrees, saying she wants to stick with acting and one day hopes to direct something of her own.

Rocks is setting the bar high for the next generation of British films to call in new voices and inspire a new crop of newcomers. A quick glance at the trailers on YouTube shows the ripple effect its set to have on young girls who identify with Bukky and Kosar. Young Black and Muslim girls are elated to see themselves in a positive light, finally. The girls smile ear to ear as I read out comments like “black girls we won”,  and “I feel so good to be a Black Muslim girl”. Kosar is visibly shocked. “It’s surreal,” she says.

Rocks is out in cinemas from 18 September.

Special thanks to Browns Fashion.