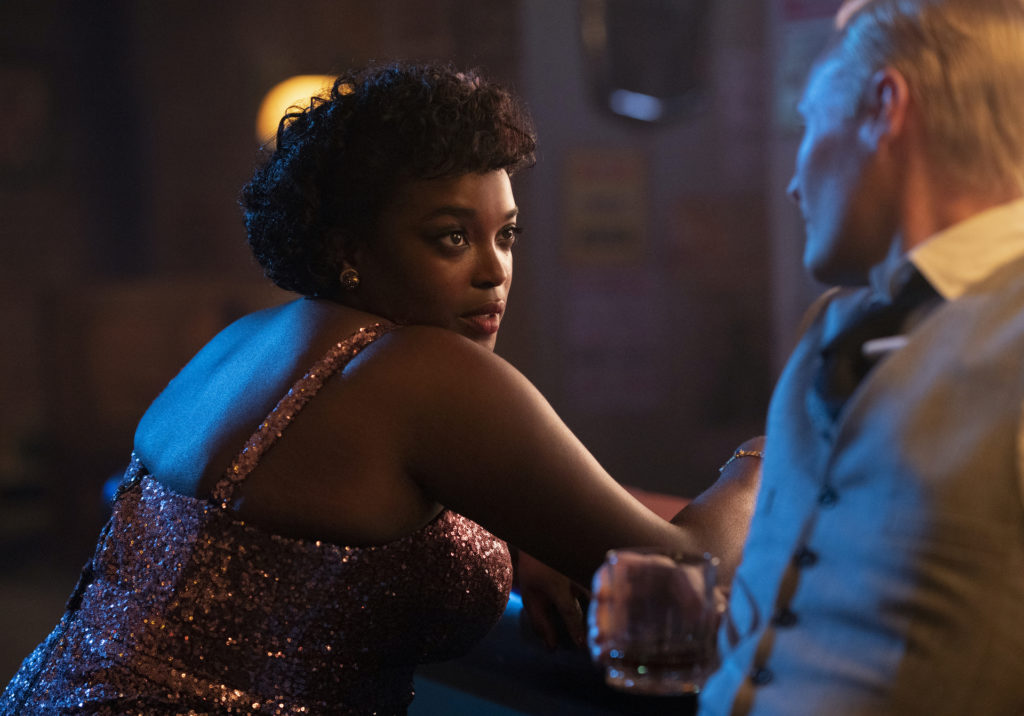 A black woman wakes up in a white body, but what’s the use of privilege if you don’t smash up systems of oppression?

Horror movies help provide emotional release during turbulent times, and since 2020 is the best horror ever written, Lovecraft Country is its cathartic antidote. The show’s commentary on the social horrors of racism has, for the first four episodes, been in keeping with a “horror of the week” format, but with a theatrical zeal more reminiscent of a melodrama than sci-fi. Although the narrative jumps fast from one concept to the next, you can’t help but be drawn into the show, which has created some nuanced and well-drawn out characters. The HBO show, written by Misha Green and produced by frightener-in-chief, Jordan Peele, chronicles the spooky happenings in 1950s America.

Enter Ruby Baptist, a dark-skinned jazz singer (played by the incomparable Wumni Mosaku), who up until now has been laying relatively low. Episode five finally gives room for her character to shine. After she loses out on her dream job to another black woman who applied “on a whim”, Ruby drunkenly falls for the charms of Christina Braithwaite’s platinum-haired assistant, William. He offers her a “sell your soul to the devil” bargain to “change her life”.

Ruby spends the night with William and wakes up the next morning in a white woman’s body. Frightened and confused, she stumbles through the streets in shock until she is “rescued” by the police when approached by a young black boy who innocently comes to her aid. This is the first clue that this isn’t a nightmare but her reality. When she switches back, she begins to convulse and writhe in pain, as if something otherworldly is ready to pierce out of her skin as her flesh rips. A painful transition.

In 2020 we’re well acquainted with blackfishing and cultural appropriation so it was only a matter of time before television subverted the debate: what would happen if a black woman swapped bodies with a white woman? Although body-swapping and metamorphosis are common tropes in television, Lovecraft Country doesn’t tackle the allegory with the usual Freaky Friday-esque antics. It takes the classic lessons of the body-swap to new heights, with the messaging becoming increasingly more complex as the episode goes on. Although Ruby’s arc does reach a satisfying climax, the “lesson” here is not as clear cut as you would expect.

Whenever television shows have dealt with race-swapping, it has always been with the white gaze in mind. In 1990, sci-fi series Quantum Leap was hailed as progressive for featuring a storyline where the lead Sam Beckett “leaps” into the body of an African-American man in pre-civil rights America. The episode “Color of Truth” was written by African American writer Deborah Pratt who wanted to “Let white America feel what this felt like.” The groundbreaking episode has been referenced in other television shows since, including the sitcom It’s Always Sunny in Philadelphia when the gang wakes up in black bodies after they are hit by an electrical storm.

In these examples “the lesson” is always being taught to a white audience, the conclusion being “see, isn’t this awful?” However, while Ruby muses that finding herself in a white body means she’s “treated like a human being” for the first time, the episode explores more than white privilege. Fittingly, it parodies a number of high profile cases namely Rachel Dolezal, and just recently Jessica Krug, a Jewish American scholar also revealed she had in fact been lying about being a black woman. In her scathing 2017 interview with Rachel Dolezal, Ijeoma Oluo instinctively observed: “I thought that she genuinely loves black people but took it a little too far. But now I can see this is not the case. This is not a love gone mad. Something else, something even more sinister is at work in her relationship and understanding of blackness.” White people will cosplay, blackfish, and appropriate in order to continue to exclude us socially and economically, so they remain on top.

It’s at a similarly sinister intersection we find Ruby; between being a proud black woman and one obsessed with assimilating at all costs. Ruby spends the day in her new body as Hillary, her white counterpart, experiencing the peace and privilege of walking through America as a white woman – the only “currency” that she needs.

The metaphor lends weight to the fallacy of liberation through underdogs climbing the ladder of capitalism and getting a taste of the lifestyle the powerful enjoy. We’ve seen endless praise for Girl Bosses and She-EOs like Angolan billionaire Isabel dos Santos. On one hand, she is praised for being a rarity, while on the other she is exposed for becoming rich at the expense of her country, which happens to be one of the poorest on earth. Or even fashion giant Nasty Gal’s Sophia Amoruso who had a Netflix series literally named Girl Boss after her antics as the high-powered pitbull founder. Her stint at the top of the ladder saw her allegedly fire fellow women for having the audacity to get pregnant. Girl power.

You can go one step further and use the story to drag black capitalism too while we’re at it. As Jay-Z raps “what’s better than one billionaire?” and Beyonce replies “two”, the pair are enjoying privilege similarly to Ruby. It shows the hollowness of black women rising up through capitalist ranks which ultimately are propped up by white supremacy. It’s uncomfortable to watch her bully Tamara, her black co-worker when she is in Hillary’s body. Not to say that black billionaires are bullies, but they are gobbling up resources for themselves rather than push for the widespread redistribution of wealth. Ultimately this does very little for the black working-class families that are exploited and dismissed by the billionaire class en-masse. The higher you rise, the harder it is to truly show solidarity.

Ruby proves in this episode that swapping positions with a white woman doesn’t automatically make her behaviour less problematic. In the same way, that black capitalism is still capitalism, a black face in a high place can be just as oppressive. We see this in the police, in politics, and beyond.

This is perhaps why director Cheryl Dunye doesn’t handle the body-swap with a kind lens. The entire ordeal is bloody and gruesome, with the shedding of skin and readjustment of bones. The audience is never once spared, being confronted perhaps with the destructive violence that white supremacy, in all of its forms, is responsible for. There is a physical price for the privilege. The cost of which will inevitably always be left for the black underclass to pay.

Lovecraft Country is refreshing as it is through the black gaze we are offered a rare glimpse into the stirrings of our own complex relationship with blackness and authority. I thought about what I would do in Ruby’s position if I too had been given the opportunity to walk in a white woman’s shoes. It poses the question to you too. Perhaps the true horror lies in us having to imagine who we’d be unburdened from our own oppression. If we were able to live freely and scandalously like those who’ve only ever known privilege, what would we do?

Lovecraft Country is on Mondays at 9pm on Sky Atlantic.