Filmmaker Rokhsareh Ghaem Maghami on Afghan rapper Sonita: ‘I just wanted her and myself to win’ 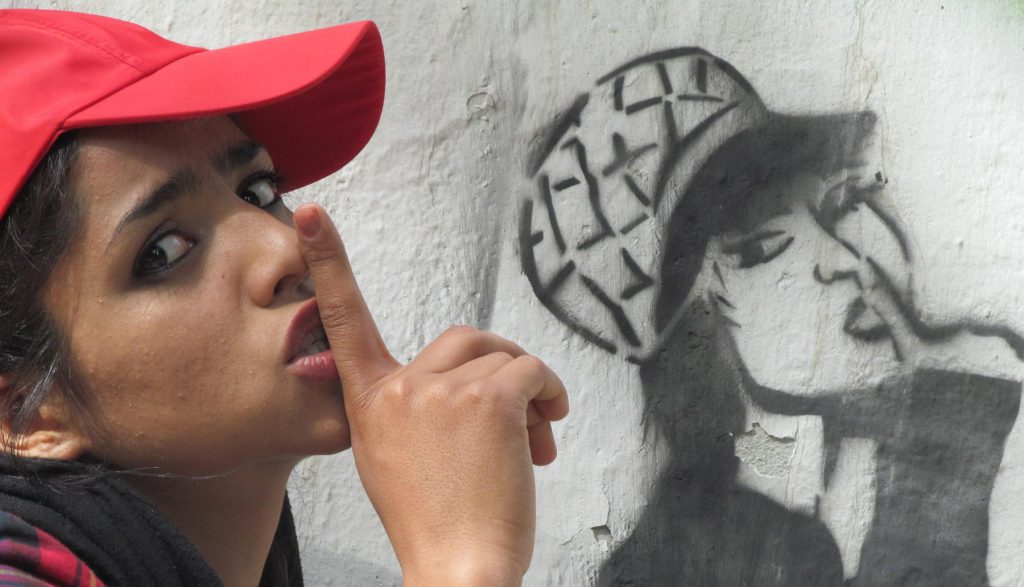 Sonita’s opening sequence bring us face to face with the ambitious, hopeful, dreamer, who gives the film its name. She pieces together clippings of amped up crowds, replacing the faces of famous pop stars with cut outs of her own face. Sonita is the Afghan refugee whose battle to escape child marriage and survive life in Iran forms the narrative for Rokhsareh Ghaem Maghami’s feature length documentary.

Watching landlords ruthlessly evict her family as she mops floors and wipes windows to provide her family with an income, we are reminded of the poor treatment offered to refugees. After escaping conflict, oppressive governments and military repression, so many (Sonita included) are met with poverty and exploitation as they are thrown under the banner “illegal”.

A film which tackles topics such as child marriage, abuse in the home, exploitation of child labourers and the integration of refugees, is an illustration of just how powerful the creative industries can be in addressing the major issues our societies face.

This film is a depiction of this very phenomenon twice over. It sheds light on a timely topic rarely discussed. Feminism that prioritises equal pay and sexual freedom is increasingly afforded air time, but teenage Afghan girls being married off to grown men isn’t something we’re particularly well versed in. Further still, Sonita’s protagonist presents a sixteen year-old hip hop artist who breaks the law every time she raps; it is forbidden for women to be singers in Iran. As well as having her age and gender stacked against her, the fact that Sonita’s music is socially conscious depletes almost any chance of her achieving success in her society.

As I share my enthusiasm about this double dose of revolutionary art, Rokhsareh Ghaem Maghami remains somewhat reserved about the power of her film. Whilst she offers that “my activism is filmmaking”, she is quick to accept its limitations. “I’ve never seen a movie that has changed the world. They can bring some change but not huge change. Music has never made any revolution [either] but revolutions have used music and used art.”

When I ask what power she thinks her film will hold in Afghanistan and Iran, she tells me “as an Iranian filmmaker, when you make a movie, the chance that you can show it to your own people is not very high [due to] censorship.” Whilst the film may be shown in Afghanistan, Maghami knows that she’ll never be able to show the film in her home, Iran, so how can it change her society? Similarly when she began looking for funders she found Germany, Switzerland and other western nations to be generous donors but securing funding in Iran was impossible.

She adds, “you have to think about what kind of story you can tell to the international audience, so your brain starts thinking in that way: how to make a film for the international viewer and how you can touch the western international audience.” Indeed, Sonita is the underdog rags to riches tale that we can’t help but love. Sonita escapes child marriage to live out her dreams of producing music before her professionally filmed music video takes her to a place she could have never imagined: Utah, USA.

In a strange twist, however, the film does not document Sonita’s rise from a distance. The film creates it. Maghami finds the music producers that make Sonita’s breakthrough track, she shoots the video that sees her first step towards fame and, when her family attempts to take her back to Afghanistan to be married off, Maghami pays $2000 to ensure that that doesn’t happen. In doing so she centres herself in the film, and she and Sonita’s destinies become inextricably intertwined as a mother/daughter, filmmaker/subject relationship develops and intensifies.

There is undeniable power in seeing the story of a brown woman, told by a brown woman. The film’s consistently whole and palpably real depiction of each woman is refreshing. Men take up barely any space in the production as Maghami jokes “I just didn’t find any interesting men!” Proud to offer a counter-narrative to the portrayal of Iran and Iranian and Afghan women she’s accustomed to she states, “when you see movies that they make about Iran most of them are very shallow. They don’t have the time and the understanding of the society so they go for the most journalistic element of the society, like look how horrible this place is.”

Sonita is a film about two women who win and the series of characters who enable their success, their complexities ripe for audiences to see. Yet the film is defined by the murkiness that lies beneath an otherwise clear cut story, of a girl with nothing who finds herself living her dreams. Reflecting on her decision to break documentarian protocol and stand on the other side of the camera Rokhsareh Ghaem Maghami pauses briefly before offering “at some point I just wanted to win. I just wanted her and myself to win, it [became this] big challenge and I wanted to win.”