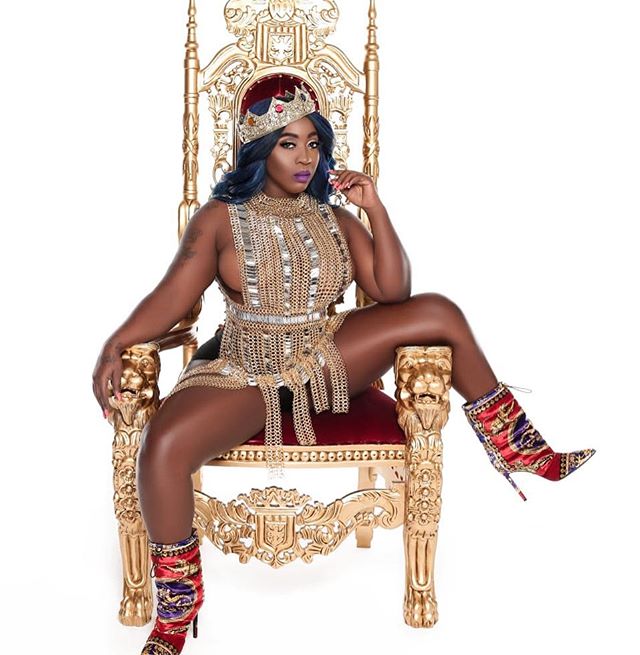 If you’ve ever seen Spice perform you’ll know she always has a trick up her sleeve. She’s quickly established herself as Jamaica’s number one show-woman, employing elaborate themes, raunchy moves and recruiting hilarious extras on stage. I became an instant fan back in July at Red Stripe’s Reggae Sumfest when she donned a short afro wig, was carried out on a Wakanda-themed throne, and proceeded to dry hump Black Panther senseless.

So when pictures of the Love and Hip Hop star with a much paler complexion circulated online recently, I knew she was up to something. She went on Instagram Live to tell her followers, and Billboard’s reggae writer Patricia Meschino, that she had lightened her skin for a “fresh start” in an exchange that was purposely bizarre. She said that she constantly received comments saying that she was “too dark” and looked “dirty”. “As a black woman, I’m mostly called black by my own race and I’m trying to please them,” she explained. However she remained evasive about her new look during the interview, laughing and asking “do I look different?” The uncomfortable exchange makes all the more sense now we know the whole thing was a charade.

She shocked the likes of Leomie Anderson to Wendy Williams, and whoever made this meme – who saw this as another “sad” example of a dark skinned woman feeling like her skin tone was undesirable. But, after the release of her mixtape Captured she decided it was time to set the record straight in an Instagram post. “On October 22nd I posted a picture of myself where I looked like I altered my appearance and metamorphosis to match the “Eurocentric beauty standards”. I fearlessly addressed an issue that has been swept under the rug and boldly took the stance in bringing a taboo topic to the forefront (sic),” she wrote. The picture it accompanied shows the singer, whose real name is Grace Hamilton, crowned and reclining on a throne with her skin a more familiar deep shade.

“I wanted to create awareness (of) “colourism” and it was done intentionally to create shock value so that I could have the worlds undivided attention to deliver the message in my music,” she continued. The post now has almost 250,000 likes and has received an outpouring of support for a topic. “Would the message in my song have been received as well as it did world wide if I didn’t go to the extreme with the picture?” She’s probably right. Her single ‘Black Hypocrisy’ which she dropped while entertainment sites debated her new skin quickly amassed almost 3 million views on YouTube, and the track debuted at number one on the US reggae chart.

Given that the scenes in the video switch between her fairer-skinned look, and a much darker hue, I was fairly certain that this was a hilarious hoax to prove an important point. I also had my suspicions about the bleaching news because we had recently sat down after her performance in Jamaica, her face flanked by a neon two-tone wig, and her skin a much darker hue. She told me how that elaborate Wakanda show was a social statement about black pride.

“I’m a strong, black woman and I’ve been called out for the colour of my skin many times and I just wanted to show how proud I am with the colour of my skin. I’m happy with the skin that I’m in. I’m representing all the strong black women,” she said. The singer then revealed that she deals with colourism “everyday of (her) life” since becoming prominent in the dancehall scene. “I get it from everyone.” she explained. “Even your own people. I’ve never been called out for the colour of my skin from a Caucasian person. It’s your own that doing it. It was important to reclaim that. I’m proud to be black.”

However, this is not the first time there’s been talk of colourism in music, even in dancehall. Back in 2010, prominent Jamaican artist Vybz Kartel began bleaching his skin and openly defended his choice on “Cake Soap” – a local term for skin lightening products. Colourism in Jamaican culture, is still alarmingly prevalent so none of this was particularly out of step. Local newspapers have even reported that a premier hospitality training agency on the island received requests from clients for light-skinned candidates – especially for front-of-house roles.

Over in the UK, singer RAY BLK has been frank when she’s spoken about the obstacles she has come up against in the industry. “Growing up, one reason getting into music seemed far-fetched was because of my skin colour,” she recently told Stylist. “He was like, ‘Don’t do that, focus on being a writer. Your songs are really good but look around, there’s no black girls in this thing. It’s just not going to work out.’ I found it sad but it made me want to break those barriers.” Back in 2016, Azealia Banks defended her decision to undergo the drastic “body modification” of bleaching her skin, only a few months after she tweeted that she believed she was overlooked in music because she wasn’t light enough “yet”. She wrote: “Depression. Watching white/lighter skinned women advance all while having worse music than mine is confusing.” So when Spice sings “I was told I would reach further / If the colour of mi skin was lighter” she’s hitting back at the idea that lightness should equate to more success.

She says she pretended to bleach her skin to highlight colourism

In 2017, the skin lightening industry was worth $4.8bn (£3.4bn) worldwide, and it is predicted to rise to $8.9bn in 2027. Products range from creams, soaps (as sold by Azealia Banks), scrubs, pills and injections that inhibit and reduce melanin. Many of the ingredients are so toxic that most of them are illegal to sell in the UK. Some even have mercury in them despite there having been a ban on the substance in skin care since the 70s. And they’re not all peddled in back alleys and tucked in the quiet corners of black hair shops in ethnic neighbourhoods, there are ranges sold by Unilever, Proctor and Gamble and L’Oreal. Even in communities that are almost wholly black the stats for skin bleaching are through the roof. An alarming 77 per cent of Nigerian women use the products.

Like the ringmaster in a circus, Spice keeps your attention locked on her, and her faux transformation was as entertaining as it was educational. ‘Black Hypocrisy’ and this publicity stunt goes some way to addressing the damaging idea that the lighter you are the better, when it comes to beauty. Asserting that she loves her “pretty black skin” is radical in an environment where many have been trained to see it as a disadvantage. It highlighted how these expectations, comments and jibes impact women like her. It’s explicit – and extra – but this is what we’ve come to expect from her and it means the debate travelled around the world. But even if she hasn’t really lightened her skin, millions of women feel compelled to, and that’s more shocking than any album promo.