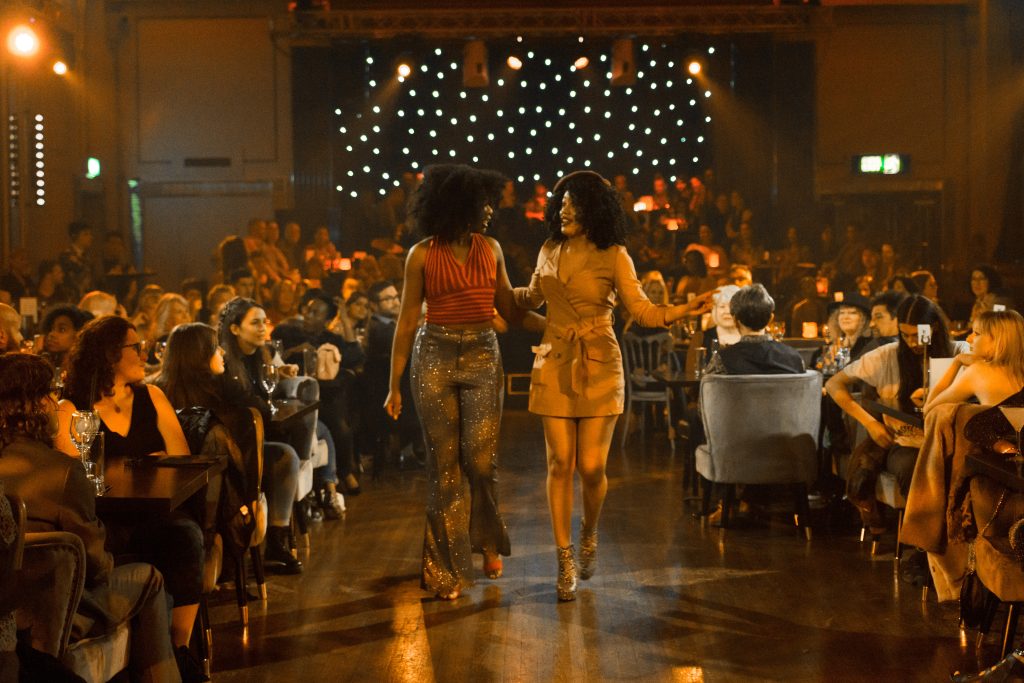 Supper Freak is the new immersive dining show from theatre company Offcast, proving that theatre can be fun, inclusive and well-rounded. At a time when it’s easy to be disconnected from theatre – which can be an exclusionary environment for people of colour and feel like one eternal run of Shakespearean drivel – immersive theatre flings the audience right into the centre of the story. It puts the onus on us to actively make the most of the experience.

Set in 70s New York, Supper Freak is a deep dive into funk and soul club culture, based around the famous Club Paradise. The story centres around two girls, Angela and Grace who sneak into Don Chamberlin’s famous night club, in the hopes of performing in their soul train dance competition. The play investigates the black American experience and how the music of that era was grounded in radicalism and liberation. And we the audience are the guests, following the story whilst we dine.

“This idea of food bringing people together and sharing a meal – you make this relationship, some sort of connection, some grounding”

Written by Rhianna Ilube, Supper Freak is an indulgent treat. Starting at £50, no, it’s not cheap, but it’s cheaper than an okayish seat at Hamilton in the West End. And boy do you get your money’s worth. Set in the Bloomsbury Ballroom, you’re waited on with a three-course meal, bottle service, a live band and all in one of the fanciest venues in London.

“The whole dining experience gives the audience permission to give themselves permission to come up and encourage each other to be a part of some sort of movement,” explains Munotida Chinyanga, the artistic director of the show who worked hand-in-hand with Rihanna to develop the creative. “We see too little of the celebration of 70s and 80s soul and funk.”

On the night, there were older black women letting go and dancing, laughing and reminiscing about the songs of their childhood, strangers becoming friends, and full-bellied guests wailing along to the music that shaped the era. It all felt so familiar, like a black family function. “

“Music is food for the soul – let’s come together, let’s sit,” Munotida says. “One of the things I do, when I’m directing, I take my cast to my house, or one of their houses and we make food together. This idea of food bringing people together and sharing a meal – you make this relationship, some sort of connection, some grounding.” And that is exactly what this dining experience achieved.

I can’t lie, I am not an interactive kind of gal, I sit at the back in comedy shows, and refuse to make eye contact when anyone on stage looks out at the audience for participation. In fact, the thought of being dragged up on stage and asked to do something out of my comfort zone terrifies me. But then again two of my most memorable theatre experiences have been immersive theatre, Punch Drunk’s Masque Of The Red Death and the Argentinian play Fuerza Bruta. Luckily, for all the introverts biting their nails just reading about this, while there is a best-dressed competition and a soul train at the end, the participation is optional – and the whole evening is just a load of fun.

“Let’s bring some celebration to black history, let’s not create a show that’s like ‘look what we’ve suffered’, let’s empower the performers, let’s empower the show,” says Munotida. Theatre about black people can often be steeped in oppression, struggle and trauma, whilst those stories are valid and have a place in theatre – sometimes black people just want to shake a leg and have a good time. Thankfully, Supper Freak was black joy from beginning to end, a relaxing respite from the harsh realities of living as a black person in the 70s and the 21st century.

“Aunties were hopping into the Candy dance routine, the singers were crooning along to Earth Wind and Fire and my soul was fed”

Having said that, the play still acknowledged racism and the political power music had for black people in America.Muntotida reminded me that, “It’s not just music, it was a form of activism.” There were mentions of Marvin Gaye’s politically conscious hit song ‘What’s Going On?’ and how it wasn’t released – leaving Marvin to go on strike, refusing to record anything else until it was. And the character Betty, inspired by black trans soul singer Jackie Shane, spoke about the chitlin circuit and how black performers were forced to sing behind curtains. And Munotida told me about the disk jockeys of the time who were “sending secret messages through music to rally activism”.

It’s more than theatre: it’s a gig, dinner and a show all rolled into one, don’t expect a continuous narrative or grandiose prose – Supper Freak is all about laughing, eating, and enjoying yourself in a time capsule playing homage to black Americans in the 70s.

Supper Freak’s launch dates were a sell-out success and more dates will be announced very soon. You can sign up here for further announcements.