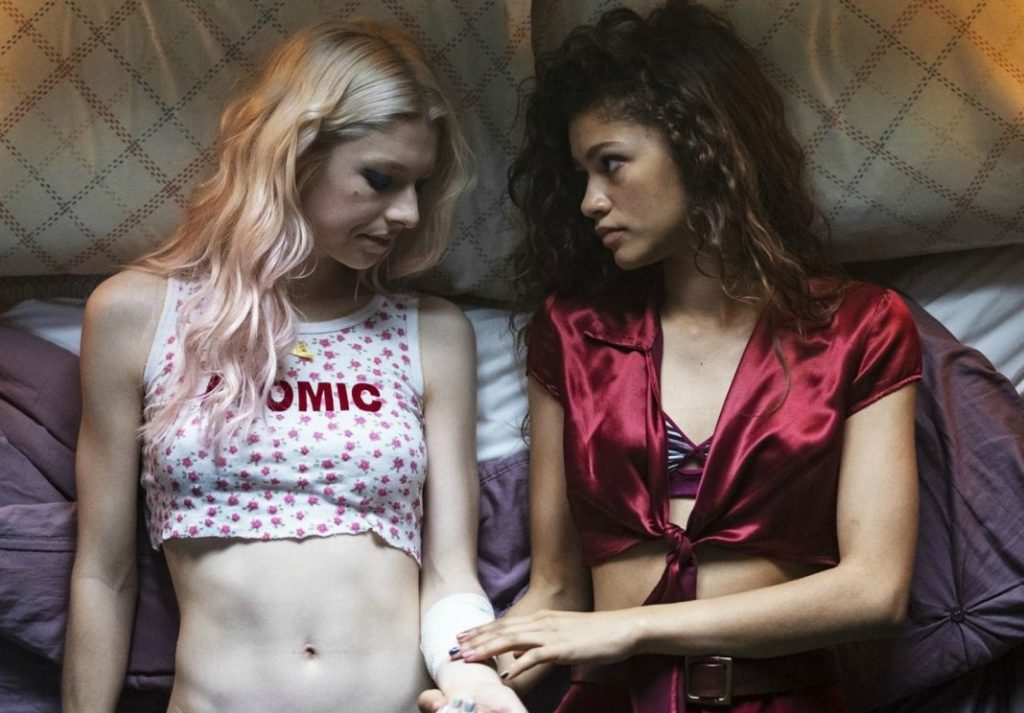 As Euphoria begins, the camera towers over a newborn baby who cries beneath a hospital TV, with then-President George Bush menacingly chanting “I can hear you, I can hear you, the rest of the world hears you, and the people who knocked these buildings down will hear all of us soon”. With her life beginning three days after 9/11, the central character Rue, played by Zendaya, takes the viewer through a dizzying sequence of her life from birth to the present day. Her whole existence is cast under a crushing hopelessness foreshadowed by this recognisably grim point in history.

Rue’s classmates, including her new-to-town best friend Jules (Hunter Schafer), online fanfic-writer Kat (Barbie Ferreira), childhood peer Lexi portrayed by Maude Apatow, as in the daughter of Leslie Mann and Judd. Also, when did she get so old? She was basically a toddler in Knocked Up. Joining them is an ensemble of rising stars all giving life to characters who are suffocating under a spell of disillusionment. It smothers them so that they can barely carry themselves through the day-to-day drudgeries of teenage melancholy.

Euphoria is directed by Sam Levinson and has artists like Drake gracing the list of producers. It has caught social media by storm, with some calling the show the next “epic teen drama”. Whilst we’ve been salaciously binge-watching the series we decided to catch up with Gen Z themselves, asking their thoughts about the new show on the block that is compellingly mapping out the DNA of their generation.

I identify most with Rue because she’s quite a flawed character. Her drug addiction clouds her recollection of events, making her an unreliable narrator who, as a narrative device, creates a sense of disconnect between the audience and the characters within the series. Equally, the palpable strain she puts on herself and her family with her constant white lies made me face the uncomfortable parts of my own relationship with my family.

Gen Z’s parents aren’t equipped with the necessary tools to help their children cope with mental illness (figures show that half of all lifetime cases of mental health conditions develop by age 14, 75% by 24) so sometimes we need to fend for ourselves. Despite her efforts, Rue can never truly survive on her own. She finds herself in relationships where she is dependent on those around her, whether they be her BFF Jules or drug-related substances.

Since I grew up in Nigeria I was drawn to the differences of American teen life on Euphoria. My own school isn’t divided between jocks and cheerleaders, our teen drug culture was much more subterranean, and the exploration of sexuality occupied a far smaller spectrum. But since moving to the UK for my A levels, I’ve met people like Jules who have sexual relationships with much older men or are engaging in teenage drug culture.

Euphoria shoves the reality of teenage depression, anxiety and addiction in your face. At first, moments like Rue’s anxiety attack or her relapse into a depressive state are very uncomfortable to watch because I can easily relate to them, having had moments similar to those in my own life.

I relate most to Barbie’s character, Kat. I’ve been big my whole life, and I was also the tallest girl in almost all my classes. So, it’s unsurpising that throughout my secondary school and college years, I developed body anxiety. I was so self-conscious wearing clothes my size because they would cling to my fat. As a result, I started wearing bigger clothes, with folds of fabric drowning me in excess.

Only recently have I tried to confront my body anxiety head-on. Like Kat, I have started wearing clothes that make me feel sexy, regardless of how the lumps and bumps on my body make anyone else feel. Watching Kat was like watching myself fighting to be the confident fat girl in the room. I could write a whole dissertation on Euphoria – it’s upsetting yet incredibly revealing.

“Euphoria shoves the reality of teenage depression, anxiety and addiction in your face”

Zendaya’s starring role was the first time I had seen a coming-of-age story that centred around a black girl. I was intrigued to see Rue explore herself, be adventurous, reckless and sad. I grew up watching shows like Gossip Girl, 90210 and Awkward and found myself living vicariously through the characters, although there was always a disconnect. These shows were too polished and glossy, sure the characters were messy and faced obstacles, but their trauma felt like an engineered plot device.

While I really relate to Maude Apatow’s character, Lexi, a wallflower that exists on the margins of their lives,  Rue imitates the exact way I experience depression. Like me, she goes through the motions and passively reacts to life. I’ll admit that the doom and gloom in the show might seem like an exaggeration, but when you’re going through it, it really does seem like it’ll never end.

I was really interested in Euphoria because I’m a big fan of Zendaya. The series’ most relatable moments are those that deal with low self-esteem and body confidence, or lack thereof, toxic relationships and the pressure parents place on their children. All of these themes really resonate with my friends and I.

It presents dating amongst teens in a fairly accurate way so many are caught in the breaking up and getting back together cycle.

The series reflects on the hyperbolic teen desires of wanting to feel wanted, loved and experience euphoria (drum roll). I’m an aspiring writer who encourages sexual fluidity, and so I understand and relate to Kat’s exploration of her sexuality.

As a woman, I also feel mortified and afraid when I see how teenage boys on the show navigate the modern dating scene. I have close friends who have been through situations that are just as confusing and upsetting as Maddy and Nate’s relationship (He polices the way she dresses, and their passionate relationship quickly escalates into an  extremely toxic and claustrophobic one). It’s important to note that rape culture and misogyny in relationships is promoted via proverbs like “Boys will be boys”, but now we can use shows like Euphoria to dismantle ideologies that are rooted in patriarchy.

Euphoria is now available on Sky Atlantic and NOW TV