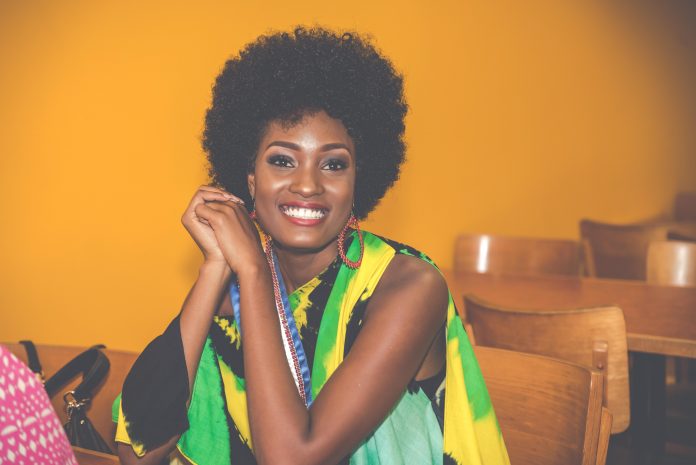 Just when I thought the world was unshockable, up popped Davina Bennett, the Jamaican Miss Universe contestant with the angelic face and afro halo. Social media went mad for the 23-year-old model who had the bottle to confront European beauty standards, head on. She came third, but we can all console ourselves in the fact that no one remembers the winner’s name.

It was an historic moment and one which will no doubt prompt more black women to go natural. It’s already happening – maybe it’s the Issa Rae effect, who knows? But the afro count has definitely gone up: at work, in the streets, on TV, everywhere. In fact, I haven’t seen this many natural hairdos since the 90s when Lauryn Hill, Erykah Badu, Lady of Rage and others inspired a whole generation of girls, including me.

“Occasionally, I’ve dabbled with the idea of going back to natural, but haven’t. I’m sure I will at some point, but the choice is entirely mine”

For a while afro puffs, locks, twists and wraps were the thing. But times change. Beyoncé appeared and no one looked back. I, of course, went back to my trusted extensions which I’ve worn ever since (not the same ones, I hasten to add). I put them in, they stayed low maintenance, I took them out and repeated the process. Simple. Occasionally, I’ve dabbled with the idea of going back to natural, but haven’t. I’m sure I will at some point, but the choice is entirely mine.

For me it’s part laziness, part ease and part wish fulfilment. As a kid, I spent many a  happy hour, wearing a towel or buttoned-up cardigan on my head, pretending to have long hair. Those were simpler times, before having to contend with the politics of it all.

“There should be no moral judgement behind the hair you wear. Everyone has their reasons and while having an afro might contribute to self-love and empowerment, it really doesn’t guarantee it”

Since then I’ve moved through everything from perms and weaves to extensions and natural, but only recently has it begun to feel like hair is something to be judged by; like I’m somehow letting the side down. Occasionally, someone will ask why I don’t or if I’ve ever thought about it, but usually it lurks behind the inquisitive glances aimed at the top of my head. At times like that, the expression says it all.  Not having natural hair sometimes makes me feel like something of a traitor.

There are a million reasons why a woman might not opt for natural hair. She might just like the way it looks, she might think it’s more manageable or, indeed, there might be something more deep-rooted. A friend once told me that she couldn’t go natural because she thought she looked like a slave. She remembered seeing Roots on the telly as a kid and couldn’t stop equating her short afro with the programme. I almost laughed until I realised she was being serious.

But even for someone with self-perception as negative as hers, there should be no moral judgement behind the hair you wear. Everyone has their reasons and while having an afro might contribute to self-love and empowerment, it really doesn’t guarantee it.

Take the Black Panthers, for instance – the party who arguably invented the afro, self-love and black pride. In her memoir, however, former Panther leader Elane Brown outlined the misogyny and colourism which was rife in the party. One look at some of the most senior women in the party suggests that self-love and pride were only available to the lighter-skinned members.

Part of Davina Bennett’s power at the Miss Universe pageant was that it stuck two fingers up to white notions of beauty. But what about black notions of beauty which are just as destructive? When was the last time you saw a black woman with an afro in a music video? How often have we heard black, male rappers dismissing darker skinned girls? Instead of quibbling over hairdos, I’d say we need to do a bit more work on our collective identity first.

The afro is a great symbol. It speaks volumes but it doesn’t and can’t say everything about who you are and what you think. I once encountered a woman with a great afro. It was full and luxurious, in fact, everything you’d want from a hairdo with its own racial identity and sense of history. But when the conversation turned to racial politics, she said nothing. It was just me, her afro and silence.

The road to self-love and empowerment might start with an afro but it might not. It might just as easily start with a weave, a pile of books and an interest in something much more powerful than a hairdo.