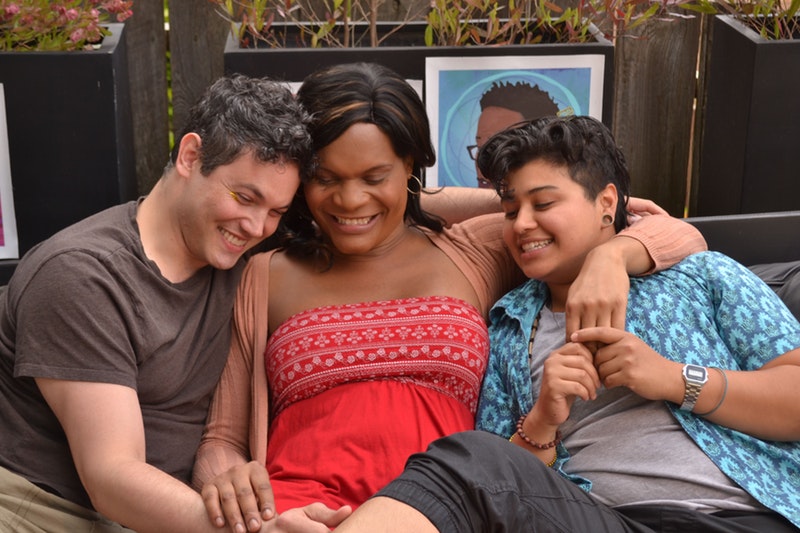 It’s rare to see the stories of trans and gender non-conforming (GNC) people void of transphobic violence and trauma. Problems of the singular narrative have perhaps begun to unravel with shows like Pose, but there’s still room for diverse representation of our community.

Transfinite, which premiers in London on 13 November, is a collection of seven short films written by trans and GNC creatives of colour that tackles themes yet to hit the big screen. Enveloped in sci-fi and magical realism, the film transports audiences to a world where trans people can see their power reflected back at them. We first encounter Najma, a trans woman who overcomes the fear of embarking on a new relationship. Later, we’re introduced to six-year-old Nova, who uses her powers to tackle bullies at school with the support of her three parents. Viva, a sex worker, entrances a powerful politician to instate indigenous and environmental justice.

The film, which was first released in April, is almost entirely self-funded and a feat of imagination and storytelling from director, Neelu Bhuman. The 43-year-old was brought up on a diet of film and literature by their parents in the town of Madanapalle, India. We sat down with Neelu to discuss the process of making Transfinite, the challenges they’ve faced along the way and why it was important to bring their story to London.

gal-dem: How did you start your career as a filmmaker?

Neelu Bhuman: I first started in 2011. I wanted to have a conversation with the world around me, with my family, extended family and with myself. I was going through an existential crisis at the time and came across a short film, Summer In My Veins, by Delhi based filmmaker Nishit Saran. In it, he talks to his mum about his sexuality in a way that was raw, honest and deeply moving to me. It led me to think about what it means to explore your own unfixed identity, to have an ongoing conversation with myself and all the different layers of community around me. These communities include my own biological family, chosen family and the world at large as a person of colour and as an immigrant. It seemed like film, as a medium, would help us move borders.

What did you want to achieve with Transfinite?

I wanted to create a platform for me and my collaborators to heal through the process of being a part of something creative and challenging. When I started the project, I was spending a lot of time with my little niece Aditi who was going through chemotherapy for a brain tumour. She stars in the film I wrote, Nova. For her, being part of the film meant she could forget all about the weekly chemo and the pain of being ‘different’ from all the other kids in school. Now she’s going into musical theatre and making this film inspired her more than I could have imagined.

The themes that we explore in the film are a reflection of our communities, no matter where we are based in the world. We’re discussing environmental justice, gender justice, healthcare, housing and breaking down heteronormative structures. Beyond that, I really wanted to create my own family of trans and non binary people of colour who are creators in many different mediums, not just film.

“It led me to think about what it means to explore your own unfixed identity, to have an ongoing conversation with myself and all the different layers of community around me”

How have you used sci-fi and magical realism to tell stories about non binary identity?
Growing up, my favourite film was Mayabazar, from 1957. It’s a mythological story featuring a character that switches gender instantly. The idea that you could move through spaces and be whatever gender you want was fascinating. When I was a kid, I thought that was the coolest thing on the planet. This concept gave us, as trans and non binary people of colour, a way to explore the idea of having power over what we’re fighting for. Magical realism allowed us to dream freely and overcome obstacles in a magical and powerful way, even if just for a moment.

What has the response been to Transfinite? What does that tell you about your filmmaking moving forward?

It’s been absolutely amazing. A lot of people of colour have come up to me and said: ‘I’ve never seen so many people of colour from different cultures represented in such a powerful way. I’ve not seen trans and non binary people not in a place of victimhood in film’. ‘Magical’ has been another word that people have been using quite a lot.

This is the fuel that’s making me get up out of bed and still continue to think about the work that I want to do as a filmmaker, despite the industry’s challenges. It’s been really depressing because I thought we would have distribution in the US by now. We were in the world’s top LGBTQ film festival, OutFest, and Frameline in the summer. The feedback from distribution companies has been that they love Transfinite but don’t know how to sell it. I was like: ‘That’s your job!’. I was so depressed in the summer but the audience and festival programmers have been really wonderful to me. I can’t talk about it yet, but it’s because of them that something cool is coming in Canada!

What stories would you like to tell with a bigger budget? What are your dreams for your filmmaking?

When I was working on Transfinite and collaborating with these amazing gender non-conforming artists of colour, there was so much talent and absolutely zero systemic resources available to tell our stories. From Nova, who has three parents and a disability, to Bahari and Shayla, that tackles environmental rights, each short could be its own feature-length film. It would be fucking amazing to have a series that focuses on trans and non binary stories from around the world so that we can see ourselves reflected; how we connect and how we differ.

I’m in South India at the moment, researching a project on a feature-length documentary about Adam, India’s first trans man pilot. I have never made a documentary, but I’m here trying to figure out how I can get some help to make this happen. Even after having Transfinite screen at all these film festivals, I’m stumped. I have no idea where to go yet to figure out how to get help for this. There’s a lot of support for youth filmmakers, but not necessarily for ones in my age group.

Funding is this huge issue a lot of the times. Figuring out how to make this film and tell it in a way that can bring Adam and his story global visibility, but still keeping the costs minimal is a gargantuan challenge in itself. My dream is to make the work that I really want to make and to discover appropriate resources to make that happen.