A $5,000 bail bond is more than most families can afford. This Mother’s Day, a Philadelphia community group will bail out and bring home black mothers. 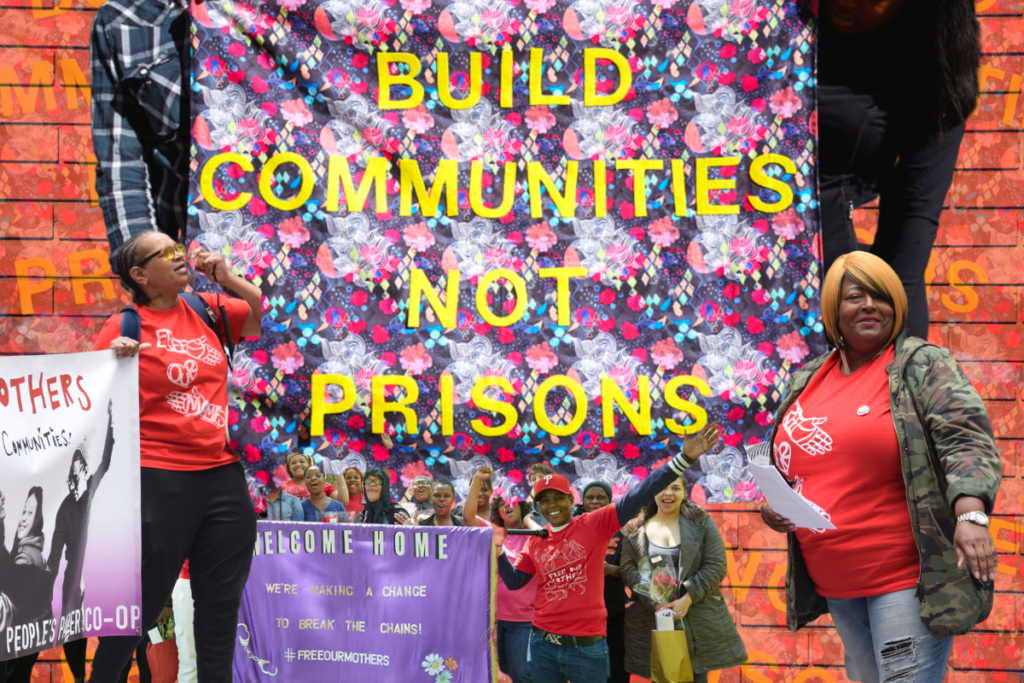 Veronica Rex was shocked when she found out that she was getting bailed out of jail.

“We had just finished dinner and I heard them say ‘[Rex], pack your things.’” She recalls that it took her a few minutes to grasp that they were referring to her. Confusion was quickly followed by excitement when she realised she would indeed be leaving the jail in Philadelphia she had been forced to call home and reuniting with her three children and 14 grandchildren on the outside.

Veronica had been in jail for 90 days awaiting trial before being bailed out by the Philadelphia Community Bail Fund, a volunteer organisation that posts bail for Philadelphia residents who cannot afford it themselves. The collective of grassroot organisers at the fund work to shed light on the inequalities of the US bail system, and to ultimately end cash bail and pretrial detention in Philadelphia.

“In the US, bail bondsmen provide loans to people who can’t afford bail, which then have to be paid back with interest”

The bail system in the US is considered to be exceptionally exploitative. Alongside the Philippines, it is one of two countries in the world that have legalised a for-profit bail industry. This means that the US operates a system of bail bondsmen who provide loans to people who can’t afford bail, which then have to be paid back with interest. This set up directly conflicts with the concept that the bail amount given should be within a person’s means, and should simply be used as a guarantee that a defendant will show up to court.

For Veronica, her bail was set at $50,000, of which she was required to pay $5,000. This was more than her family could afford. She made the decision that whatever money her family could come up with, they should put it towards hiring a good lawyer, rather than paying the bail. This is a choice that organisers say she never should have been faced with. The Philadelphia Community Bail Fund has posted bails ranging from $250 to $350,000 – with one bail payment of $50,000 that they were required to pay in full. The money is raised primarily through donations from community members. Since they began, they have brought over 200 people home.

This Mother’s Day, Veronica and the Philadelphia Community Bail Fund will head back to the jails on State Road in Philadelphia. There they will bail out and welcome home a group of women who are in a similar situation to what Veronica experienced: not yet convicted of a crime and removed from their family, while unable to afford the required bail. These women will be bailed out as part of the Mama’s Day Bail Out Campaign, a national movement to bring home black mothers for the holiday.

The movement started in 2017 when a group of organisers from the Movement for Black Lives and Color of Change held a meeting with black organisers from across the US They decided then that they wanted to do something black-led that would bring awareness to how mass incarceration was devastating their communities. Mary Hooks, the co-director of Southerners on New Ground, organisation which champions LGBTQ liberation across all lines of race, class, abilities, age, culture, gender, and sexuality in the South, ultimately came up with the idea and invited others to join in mobilising to bail out people from jail. They made the conscious decision to focus on supporting women, who are the largest growing prison population and specifically black mothers who are often the core of their families and communities.

“I don’t think some of those things are thought about when you incarcerate mothers,” Veronica tells me. She explains that when a mother is absent it affects a multitude of people. “That’s a mother. She’s the breadwinner, she’s the caretaker, she’s the cooker, she handles the bills making sure the electric stays on, the gas, the water. That’s a big part to be missing in your life.” She adds: “Mother [is] the foundation of the home, so you start removing parts of the foundation, then what happens? Then we have lost children and the cycle just continues.”

The call-to-action from Mary Hooks has led to an ever-growing number of bail funds that post bail not only on Mother’s Day, but throughout the year. Organisers from National Bail Out (NBO), a national organisation that advocates for an end to pretrial detention and supports local community bail funds, estimate that there are currently over 35 funds in the US. Additionally, the public has become more critical of the criminal justice system in the US and the role of bail. NBO Project Director Arissa Hall credits the change in mentality to the bail education work that NBO and the community funds have done, as well as to growing media coverage and several high-profile examples that have humanised the issue.

Arissa tells me the powerful story of Kalief Browder. “In New York City, this man, who was a boy at the time, was in Rikers Island for three years without being convicted of a crime, just because he wouldn’t admit to [committing a crime] and he couldn’t afford the bail,” Arissa tells me. “[He ended up taking his life] due to the trauma of being confined in a cage for years. Sandra Bland who was a black woman who couldn’t afford the money bail [and] ended up being found dead in a cage, as well.” Arissa explains that the public is now seeing the real human cost of money bail, and they’re outraged.

The Philadelphia Community Bail Fund does not make assessments on the basis of a person’s case when they are making a decision to bail someone out, as all individuals in jail awaiting trial are considered innocent. The only obstacle in the way of incarcerated black mothers getting their freedom is money – a bail, which wealthier individuals easily pay. To many this feels reminiscent of another era.

“It has a direct lineage to our slavery,” says Arissa. “The work of our ancestors to free one another during slavery and buying one another’s freedom.”

Veronica adds, “Somebody paid for my freedom one time already and lost their life already for me to be here, to go to school, to read, to write. And now out here I have to pay once again: modern-day slavery.”

In addition to the economic injustice of bail, being incarcerated pre-trial has a host of other effects on an individual. People are at risk of losing housing, jobs and custody over children while in jail. People incarcerated pretrial also are more likely to take plea deals than people who aren’t detained during this period. A plea deal involves a person pleading guilty in exchange for concessions or a more lenient sentence, meaning the crime will go on their record. Additionally, the stigma associated with being incarcerated pretrial means that judges and juries are more likely to assume the person is guilty of the crime.

All these factors have prompted elected officials to take a second look at bail. Across the nation, a new wave of progressive district attorneys has been elected on campaigns to end cash bail. However in Philadelphia, after initial policy proposals by the district attorney to stop seeking bail for misdemeanors and low-level offenses, efforts have stalled. Advocates in the city have reported numerous instances of high bails being requested of unemployed and low-income individuals.

The Philadelphia Community Bail Fund and their allies across the nation will continue to work until cash bail is truly ended. This includes fighting alternatives to bail like pretrial risk assessments – algorithms that attempt to predict a person’s likelihood of showing up to court or getting rearrested, in order to determine whether they should be incarcerated pretrial.

“We want integrity in our courtrooms, and we want to be heard”

“We don’t want risk assessments, we don’t want tools, we want human capacity, we want integrity in our courtrooms, and we want to be heard,” says LaTonya Myers, a bail navigator with the Philadelphia Defender’s Association and a formerly incarcerated person. “We want our mothers home. We want services and resources to address the underlying issues that are going on.”

And because that time at home can mean a world of difference for someone, advocates continue to post bails.

After Veronica was bailed out, with the help of the Philadelphia Community Bail Fund, she was able to navigate the court system and her case was closed. She now works at a local nonprofit and volunteers with the fund. By sharing her story, she hopes that she will be able to help others.

“I’m just blessed that I have the opportunity to be a part of this as well being able to give back,” she tells me. “I feel like I have something to say, I have an experience.”

At a rally celebrating last year’s Mother’s Day bailout, Latonya spoke to the group of women, organisers and supporters.

“It’s time for us to dismantle the structural racism and reverse all this injustice that’s going on in our community. Together we’re going to do it by embracing these women who are coming home, who are finding their voice, becoming activists, standing up and advocating for themselves,” said Latonya.

A chant rang out from the crowd: “I am her. She is me. Free our mothers. Let us all be free.”